An introduction to NHRA's pro classes

The NHRA hosts four professional classes in the Mello Yello series, including Top Fuel Dragster, Funny Car, Pro Stock, and Pro Stock Motorcycle. You can learn a little bit about each of them below, including technical specs, who took home the championship last year, and more. 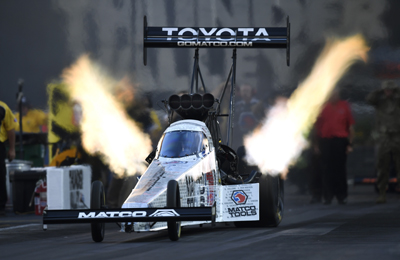 Chassis: 4130 chromoly tubing; wheelbase can vary between 280 and 300 inches. Center-mounted driver sits in front of the engine.

Body: Attached to the chassis with quick-release fasteners, the lightweight multipiece body and cowl are typically formed of metal, fiberglass, or carbon fiber/Kevlar.

What to watch for: Bruno Massel explains how the wings create the all-important downforce for a Top Fuel dragster: 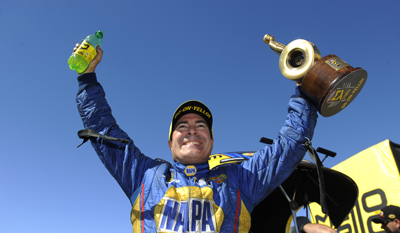 Body: Carbon-fiber replica of a 2000 or later model NHRA-accepted coupe or sedan of a type originally mass-produced by an automobile manufacturer.

Rear spoiler: Capable of applying 6,000 pounds of downforce to the rear tires

What to watch for: Tony Pedregon explains how the chassis of a Funny Car is put together: 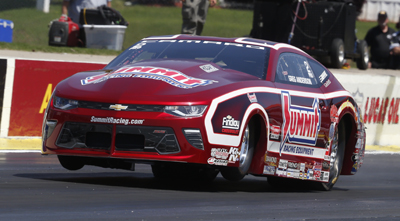 Body: Pro Stock bodies are composite replicas of their two- and four-door showroom counterparts. All body components must comply with the shape of stock components. Doors must be functional and operable from inside and out, and headlights, parking lights, and taillights must be stock-appearing.

Engine: Restricted to a maximum 500-cid, single-camshaft, 90-degree V-8 of the same corporate make as the body. Air, fuel, and ignition are controlled via an NHRA-specified engine-control module, eight fuel injectors, eight coil-near-plug modules, and a throttle body.

What to watch for: Unlike it's Nitro counterparts, Pro Stock drivers have to shift four times during a run. Reporter Bruno Massel explains breaks down the process: 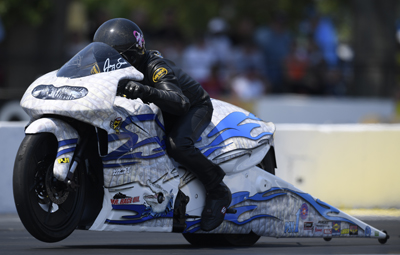 Body: Aerodynamically enhanced replica of the original body following many production dimensions, and it is made from either fiberglass or a carbon-fiber composite.

Engine: The majority of racers use the V-Twin style or inline four-cylinder Suzuki or Kawasaki. NHRA-accepted fuel injection is permitted on all engines.

Tires: The rear slick is 10 inches wide and 26 inches in diameter and is designed specifically for motorcycle drag racing. The front tire is a lightweight, treadless design that aids braking. Air pressure is 5 to 6 pounds on the rear tire and 30 to 32 pounds on the front.

Brakes: Three aftermarket carbon-fiber-composite or steel brake discs, one or two on the front and one on the rear. Parachutes are not required.

What to watch for: Tony Pedregon explains the unique ride the Pro Stock Motorcycle category offers.