Five years ago, Thomas won Comp in Dallas. Thomas reached the final round again in Denver, and bagged his second national event win after low qualifier David Kramer fouled. Thomas was the No. 7 qualifier in the 10-car field but worked his way to the final with wins over Matt Harris and Christine Harris. Against Christine’s G/Altered Grand Am, Thomas was sharp on the Tree with a .002 light and a (-.623) 7.277 in his B/Econo Dragster. Harris had lost .12-second off his index before the final but that became a moot point after Kramer’s foul. [Video]

Chaney scored his third national event win in six final rounds after topping Comp racer Shaun Vincent in the Super Stock final. Behind the wheel of his GT/KA Camaro, Chaney won the double-breakout final with a 10.971 on his 11.00 dial after Vincent missed his 10.71 dial with a 10.658. There was a short field in Denver with just 17 cars making the trip, but that doesn’t mean that Chaney had an easy path to the final round. His opponents included 104-time winner Dan Fletcher, Division 5 champ Tyler Wudarczyk, and Division 2 Allstar Jeff Adkinson. Chaney left first against all of them and also grabbed a significant advantage against Vincent in the final round [Video]

Skillman wasn’t able to defend his Pro Stock title at the Dodge Mile-High Nationals, but after a lengthy wait on the starting line, he made the most of the trip with a win in Stock. Behind the wheel of his Cobra Jet Mustang, Skillman chased down final-round opponent Lane Weber, who got a seven-second head start in his V/SA Buick. The finish was a double breakout with Skillman under his dial by .001-second and Weber under by a more egregious .008-second. The win was Skillman’s 14th overall, including his wins in Pro Stock. [Video] 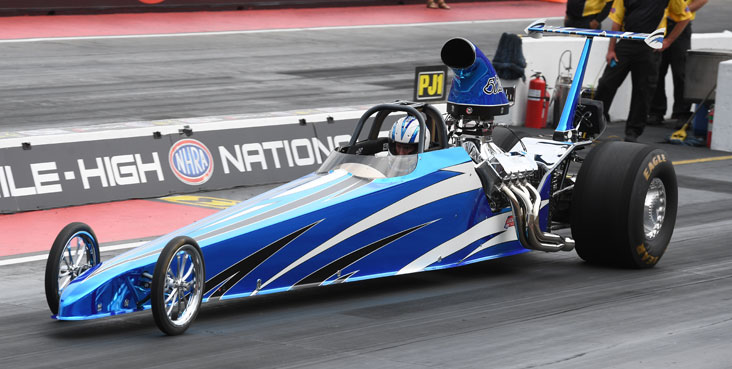 Hutchens (no relation to the former Pro Stock team owner) was brilliant in his drive to the Super Comp title with a string of great reaction times. Hutchens used a .004 light in the opening round to stop Kari Larson and took out Cody Perkins in the third round with a .002. Hutchens took on Bill Percival in the final, and after an even start, .002 to .005, Hutchens claimed the double-breakout win, 9.453 to 9.412 on the 9.50 altitude adjusted index. Percival had been nearly unstoppable with back-to-back perfect .000 lights in the quarterfinal and semifinal rounds. [Video] 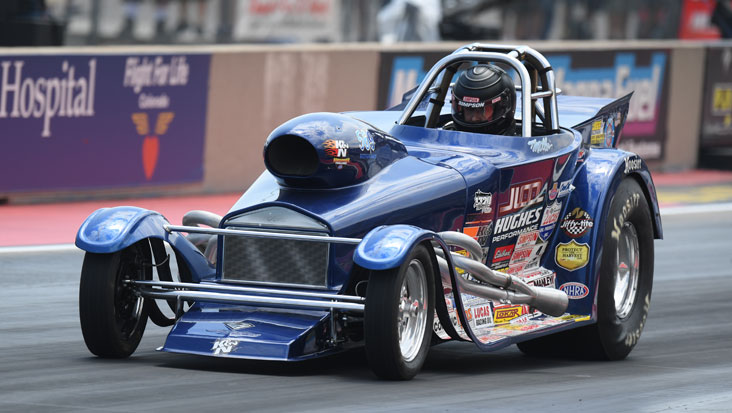 Miller has now won 10 times in his career and four of them have come in Denver. Miller earned the Super Gas title after final-round opponent Kevin Moore fouled by a thousandth of a second. Miller, in his 27-T Ford roadster, used wins against Craig Maddux, Ryan Siffring, and Bradley Johnson to reach the final round. Against Siffring, Miller nailed the 10.50 altitude adjusted Super Gas index with a 10.505. [Video]

Four years after winning his first national event title at Bandimere Speedway, Brian Percival scored again in Super Street by taking down Michael Condon in the final round. Percival was nearly unbeatable in the final round with a .009 light and a 10.515 on the 10.50 index. Condon’s shot at the title ended with a 10.488 breakout. Percival also drove his ’69 Dodge Dart to early wins against Scott Carpenter, Trevor Larson, and Jason Schade. [Video]

Top Dragster presented by Racing RVs celebrated another first-time winner after Milinazzo defeated Josh Herman in the final round. Milinazzo grabbed a .02-second lead at the start and then sealed the deal with a 7.480 on his 7.47 dial while Herman came up a few feet short in spite of a 7.444 on his 7.44 dial. Milinazzo worked his way to the final with wins against Darian Boesch, Don Knoblauch, Jeff Coron, and Jamie Caudill. [Video]

Texas-based Lair made the trip to Denver to pick up his third career win in Top Sportsman presented by Racing RVs. The final round featured a battle of the top two qualifiers in the class with second-seed Lair taking on Monte Green. Lair got off the starting line first with a .016 light and held on for the win with a 7.028 on his 7.02 dial after Green ran a 7.008 on his 6.99 dial. Lair also stopped Sammy Gonzales, Wade Kiefer, and Bud Preuss to reach his fourth career national event final. [Video]