Emery, a former gas and fuel dragster driver, is best remembered initially as the driver of Rich Guasco’s popular Pure Hell fuel altered in the mid-1960s but won a pair of NHRA national events in Funny Car the mid-1970s while driving for Jeg Coughlin Sr. 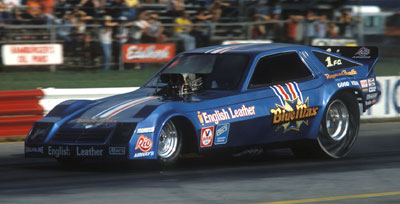 After a scary crash in Mike Burkhart’s Camaro at the 1977 U.S. Nationals that broke his right arm, he went to work for Beadle on the famed Blue Max Funny Car in 1978 and together they won the NHRA championship three straight years, 1979-81, while innovating techniques such as dual-magneto drives and down nozzles in the cylinder heads.

Emery also tuned the John Lombardo-driven Blue Max to the U.S. Nationals title in 1985 to go with the one he earned there with Beadle in 1981 and continued to tune the Blue Max until the end of the decade.

He later opened Emery Fuel Systems, building fuel pumps and injectors for the nostalgia series as well as for a few contemporary teams.

Emery is survived by his wife, Brenda.

For more on Emery’s career, read my Dragster Insider column from 2012.