Jonathan Anderson qualified for the NHRA Moser Sportsman Shootout in two classes and advanced to the final round in both taking the honors as both Champion and runner-up in the specialty event at this weekend’s NHRA Lucas Oil Drag Racing Series at Rockingham Dragway.
16 Oct 2018
Posted by NHRA.com staff
News

Jonathan Anderson qualified for the NHRA Moser Sportsman Shootout in two classes and advanced to the final round in both taking the honors as both Champion and runner-up in the specialty event at this weekend’s NHRA Lucas Oil Drag Racing Series at Rockingham Dragway.

In a year long points battle, Anderson, Williamson, Ga., qualified both his ‘05 Pontiac Super Street and his ’09 dragster in Super Comp. He then took out Matt Weston (Super Street) and Michelle Furr (Super Gas) in round one. Also qualifying in two classes was Red Boy, Ala., racer Jeff Strickland who beat Kenneth Stott in round one with his stock entry but fell to Lindsey Barker in Top Dragster.

Anderson advanced both cars in round two then took out Jeff Longhany, who had beat Strickland in round 2, and Sandy Wilkins in the semifinals to set up a final round match up with himself. Anderson and his team staged both cars for the final round photo then celebrated in winner’s circle with both cars and the Moser Sportsman Shootout Championship trophy.

Racing continues on Saturday with elimination rounds for the Lucas Oil Series event, the final event in the Southeast Division for the 2018 season.

The NHRA Southeast Division Moser Sportsman Shootout will take to the track at Rockingham Dragway this Friday, Oct. 19, on opening day of the NHRA Lucas Oil Drag Racing Series event.

Through a season long points battle in 2018, the top two Moser Sportsman Shootout point’s earners in each of the seven classes in competition were slotted into the 16-car field while Tim Powell and Casey Spradlin will complete the ladder as the Moser Shootout Wild Card entries.

Three drivers are pulling double duty as they have qualified in two classes. Rusty Cook in Super Comp and Super Gas, Jonathan Anderson who will face off with Cook in round one of Super Comp and is also on the ladder in Super Street, and then Jeff Strickland who is entered in Stock and Top Dragster. Cousins Dylan Stott and Kenneth Stott both qualified with Dylan in Top Sportsman and Kenneth in Stock.

The Moser Sportsman Shootout is unique in that racers from seven entirely different class structures Super Stock, Stock, Super Comp, Super Gas, Super Street, Top Dragster and Top Sportsman will be racing each other. Eliminations will be in a dial-in/breakout handicap format on an eighth-mile. 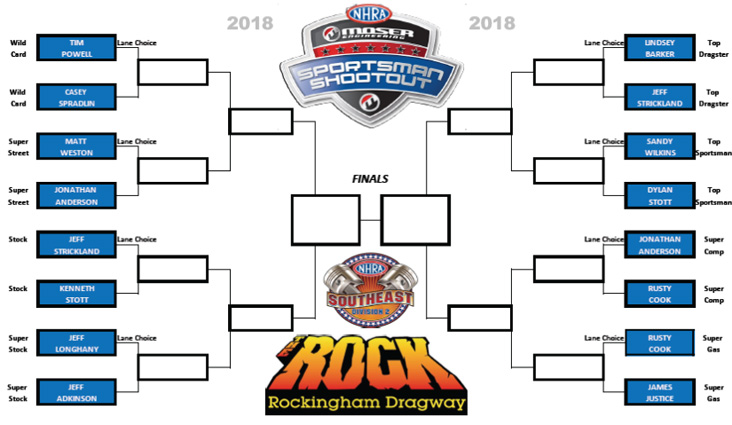