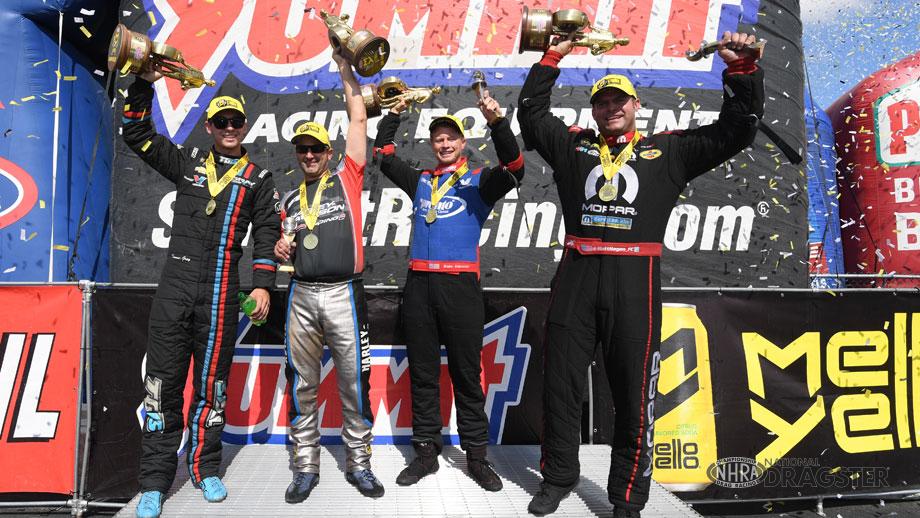 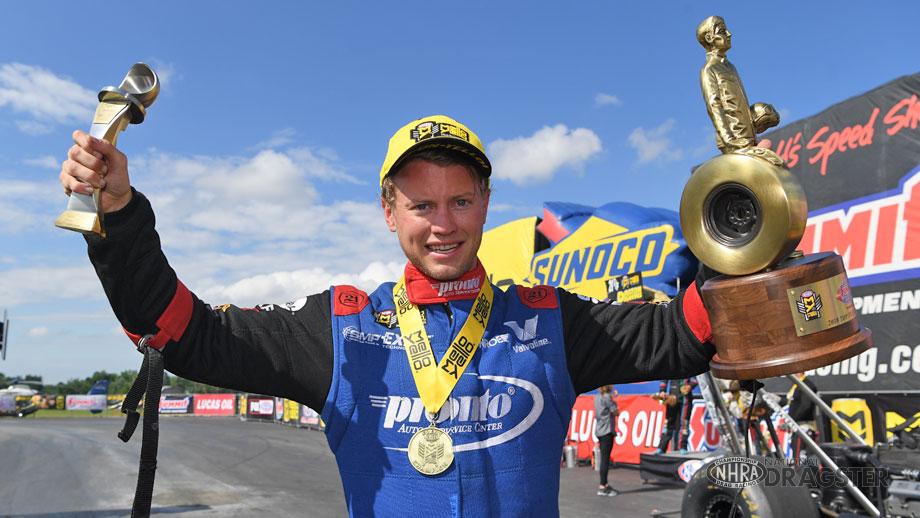 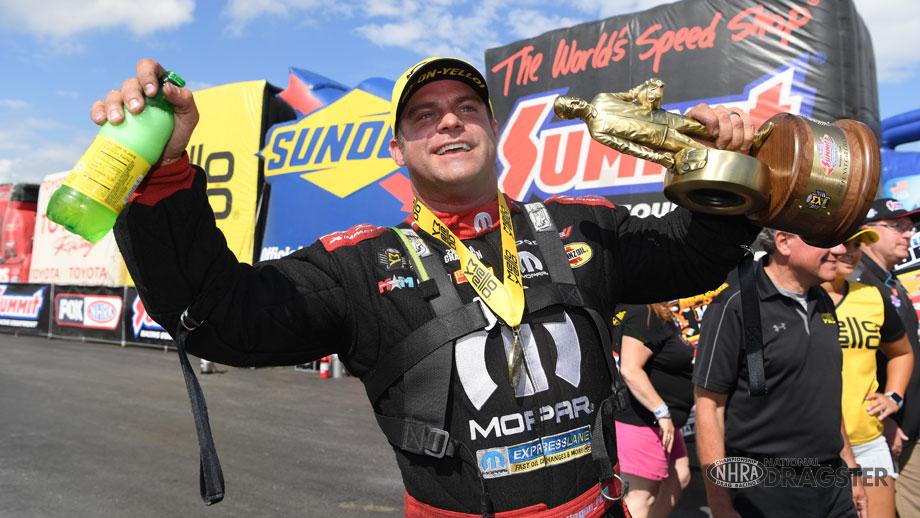 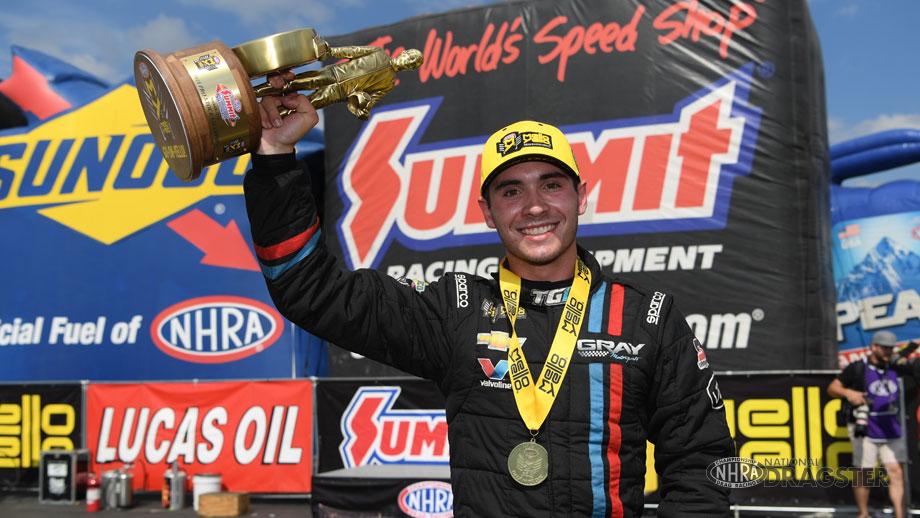 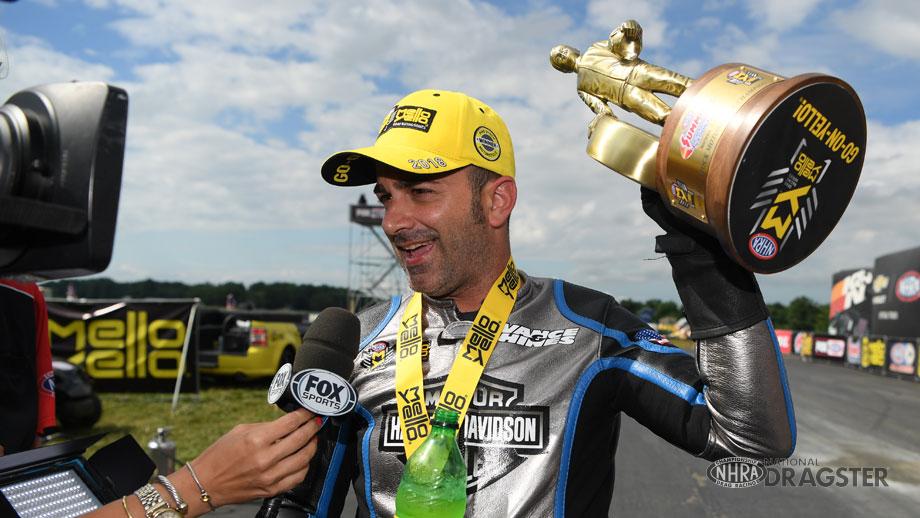 “It felt really good,” Alexander stated. “I got a little emotional because I’ve tried to do this my whole life. I’ve come close but have lost sponsors, thought I was never going to drive the car again and basically we have gone through everything to climb back to the top.”

Alexander qualified 12th for the event and defeated Antron Brown, Tony Schumacher and Leah Pritchett before entering his second career final round.

Hagan powered to the Funny Car win with a run of 4.094 at 288.21 in his Mopar Express Lane Dodge Charger R/T to take down points leader Courtney Force in the finals. The two-time world champion locked-in his second victory of the season, and first since the season-opening event in Pomona.

“We just had a good solid car all weekend,” Hagan said. “We qualified well and went down the race track pretty much every lap. It’s been a while since we turned on four win lights but it’s a nitro funny car; you never know what you’re going to get."

Hagan qualified third for the event and defeated teammates Tommy Johnson Jr. and Jack Beckman along with J.R. Todd en route to victory.

Force secured her first runner-up finish of the season after qualifying in the No. 1 position. She defeated John Smith, Shawn Langdon and her father John Force on her way to the finals.

Gray was able to take down two-time world champion Erica Enders in the final round for his eighth career victory and third of the season. His 6.615 at 209.62 in his Gray Motorsports Valvoline Chevrolet Camaro made him the only Pro Stock competitor to reach the winner’s circle three times in 2018.

“This was definitely a huge accomplishment,” Gray said. “We struggled a lot at the beginning of the season. We did a lot of testing and couldn’t really see where that hard work was because the results weren’t showing. It feels good to have finally turned a corner and see where all of the hard work has paid off.”

He took down Chris McGaha, Matt Hartford and Drew Skillman to bring home the win.

Enders now has four runner-up finishes on the year to along with a victory in Charlotte, as her five final rounds are the most in the class in 2018.

Krawiec secured his third Pro Stock Motorcycle victory at Summit Motorsports Park with his pass of 6.923 at 195.05 on his Screamin’ Eagle Vance & Hines Harley-Davidson to defeat Jerry Savoie.

“It was a good one for me,” Krawiec stated. “It’s been a good weekend for us. It was a struggle early on trying to dance through the rain drops. We were trying to get a handle on a new track and understand what it is we need to do. We were able to get it done and get our bike in the winner's circle.”

Savoie has two final round appearances on the season with a victory at Charlotte earlier in the year.
The 2018 NHRA Mello Yello Drag Racing Series season continues at New England Dragway in Epping, N.H. from July 6-8.