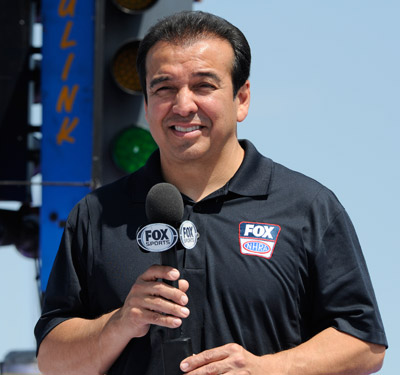 Two-time NHRA Mello Yello Funny Car world champion Tony Pedregon took a break from his current duties as a color analyst on the NHRA FOX Sports television broadcasts to return to the seat of a 10,000-horsepower nitro Funny Car. Pedregon got the opportunity during a recent test session at Lucas Oil Raceway at Indianapolis, where he was asked to fill in for his brother, Cruz, behind the wheel of his Snap-on Toyota. Cruz was away on business and was unable to attend the test, which also included Del Worsham’s Funny Car and Brittany Force’s Top Fuel dragster.

“This was sort of a last-minute deal where Cruz called me and asked if I’d drive his car,” Tony noted. “Obviously, Cruz and his guys have been working hard to get their car sorted out. They’ve made a lot of progress, but after Atlanta, they felt like they needed to test. I was happy to help out.”

Tony, who had not driven since parking his own car at the end of the 2015 season, got a chance to make several runs and even carded a career-best 3.97, his first three-second run, on an early-shutoff pass of just 281 mph.

“I once ran a 3.95 in my own car when we were running a quarter-mile, but that was a long time ago,” Pedregon joked. “Every car is a bit different, and Cruz’s car is quite a bit different than my last car, at least as far as the steering goes, but all things considered, I felt pretty comfortable. I can tell you this: after being out of the seat for a year, I was probably a bit rusty, but it’s still an amazing feeling when you step on the gas in one of those cars.”

Since he’s been out of the seat for less than two years, Tony’s NHRA license was still current, and he’s kept his firesuit, helmet, and safety gear handy for opportunities such as this one. The only adjustment that needed to be made to the race car was the addition of a small amount of ballast to compensate for the weight difference between the two brothers. 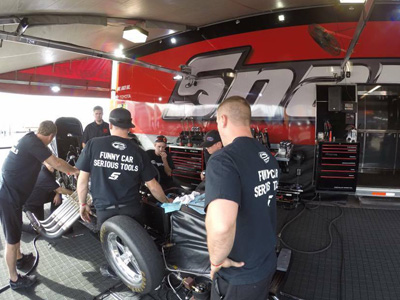 While Tony was able to do his part to help Snap-on crew chief Aaron Brooks sort out some of the mechanical issues with their car, the test also presented an opportunity for him to bring a fresh perspective to the growing NHRA television audience.

“I’ve driven these cars for more than 20 years, but they are constantly changing,” Tony said. “I didn’t really have much experience with the laid-back headers for example. Getting to drive again has helped me understand what’s going on with these cars as far as how they behave and how some drivers adapt, and that’s something I hope I can pass on to our audience. It’s also great to have that experience to where a driver can’t say to me, ‘You don’t understand this or you haven’t done that.’ I do feel like I can relate to them, perhaps more than ever now.”

For his part, Cruz monitored the test from afar and was ultimately satisfied with the results and with Tony’s return to the driver’s seat. 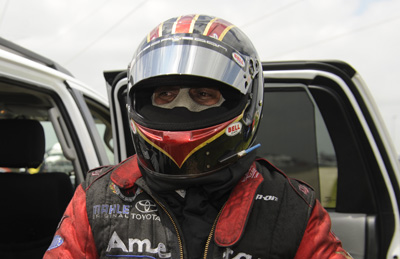 “I felt we learned what we needed to know during our test session,” Cruz said. “Being 2,000 miles away was the toughest part, so I was constantly texting and calling Aaron [Brooks] and Caleb [Cox, media rep] to see what was going on with the car, the team, and the track. Aaron and I had a good discussion after Atlanta, and I believe we had a good game plan going into that test session, and I was fully confident in tune-up adjustments he was going to implement.

“Having Tony drive the car was good also because there aren’t very many people I would allow to drive my race car. He got the OK from FOX and never forgot where his firesuit was. We are going to head into Topeka with a cerebral strategy; four qualifying runs, four full pulls. Every run we can get data is critical. We are on the right path but are ready to reap the results of our hard work now."