The NHRA Summit Racing Jr. Drag Racing League will celebrate its 25th anniversary during the 2017 season, commemorating a quarter-century of participation from thousands of kids ages 5-17.
01 Feb 2017
Posted by NHRA.com staff
News

The NHRA Summit Racing Jr. Drag Racing League will celebrate its 25th anniversary during the 2017 season, commemorating a quarter-century of participation from thousands of kids ages 5-17. 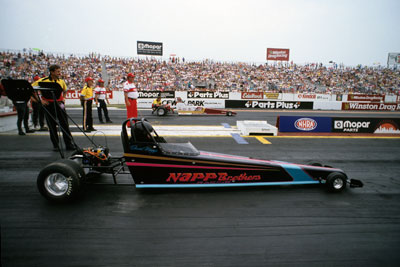 The NHRA unveiled the Jr. Dragsters on July 9, 1992, during the NHRA’s national event at Old Bridge Township Raceway Park in Englishtown. It featured the first Jr. Dragster exhibition race by Jill McKenna and David Napp, the son of Vince Napp, who was the catalyst for the start of the league. The NHRA then started the Jr. Drag Racing League (JDRL), providing an opportunity for thousands of kids ages 5-17 to race half-scale dragsters in a controlled environment at many of NHRA’s member tracks throughout the United States and Canada.

“My father’s dream for Jr. drag racing was really to ensure the future of drag racing because all the other motorsports had karting or a motocross beginning as young as age 5,” said David Napp, marketing director and co-owner of Old Bridge Township Raceway Park. “It’s a great legacy for him, and I’m proud to witness the continued growth of the league.”

NHRA Summit Racing Jr. Drag Racing League competitor’s race cars, called Jr. Dragsters, are half-scale versions of the iconic Top Fuel dragsters. They go as fast as 85 mph and as quick as 7.90 seconds in the eighth-mile using a five-horsepower, single-cylinder engine, though younger age groups are restricted to slower times and speeds.

“It’s hard to believe it’s been 25 years,” Enders said. “It is such a cool deal. I was blessed enough to have a family that supported what I wanted to do from early on. My dad raced, and I still very clearly remember the night we were in the garage talking while he worked on his hot rod, and I opened National Dragster and read the story about the JDRL starting up. It obviously changed everything for me. Just look at the life it’s turned into for me. I get to do what I love.”

For Enders, her success in the NHRA Summit Racing Jr. Drag Racing League was chronicled by the Disney Channel movie Right On Track, which profiled her and her sister’s first steps in the sport.

“The Disney movie just made the whole thing explode. After it came out there were little girls dragging their dads to the Pro Stock pits to see us and say hello,” Enders continued. “So many kids over the years said I inspired them to race, and that’s so flattering. I hear people all the time say they didn’t even know drag racing until they saw the movie. It was so big for me and for the Jr. Drag Racing League. To see how many kids do this now is so crazy.”