Mello Yello will extend its relationship with NHRA by continuing its longstanding association as sponsor of its premier series.
31 Aug 2017
Posted by NHRA.com staff
News 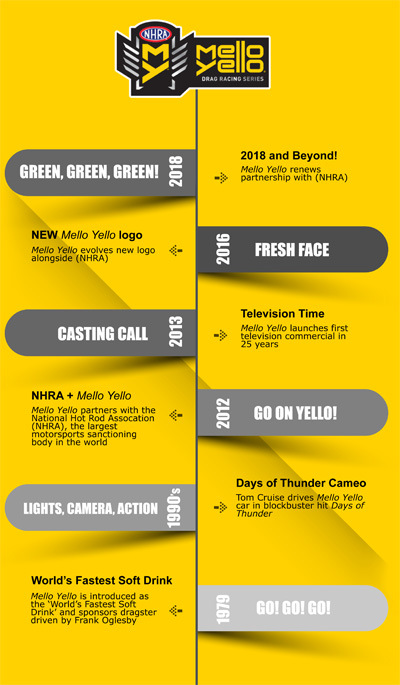 “Our agreement with the NHRA gives us significant exposure to refresh fans with the smooth citrus taste of Mello Yello,” said Al Rondon, senior sports marketing manager, Coca-Cola North America. “This is another chapter in the brand’s deep history in motorsports and we couldn’t be more thrilled to continue being part of the NHRA family.”

Throughout this sponsorship, which began in 2002, the NHRA has helped Coca-Cola deliver growth for multiple brands in the organization’s portfolio.  These beverage brands play a significant role at NHRA events, offering fans and drivers alike refreshment and fun.

“The Coca-Cola Company is an important part of the continued success of NHRA drag racing,” said Clifford. “Over the past 16 years working with The Coca-Cola Company, we’ve witnessed firsthand the organization’s dedication to its mission to offer refreshment and inspire happiness. Our fans, drivers, teams and partners love the ingenuity that this relationship continues to drive.”

In its time as the banner brand for NHRA’s premier series, Mello Yello has gained significant market share and shows no signs of slowing down. The NHRA announced preliminary plans to implement services and interactive experiences specifically tailored to first time attendees at all 2018 NHRA Mello Yello Drag Racing Series events. As the NHRA continues to provide activations and national visibility for the Mello Yello brand, fan retention will play an important role in its continued growth.