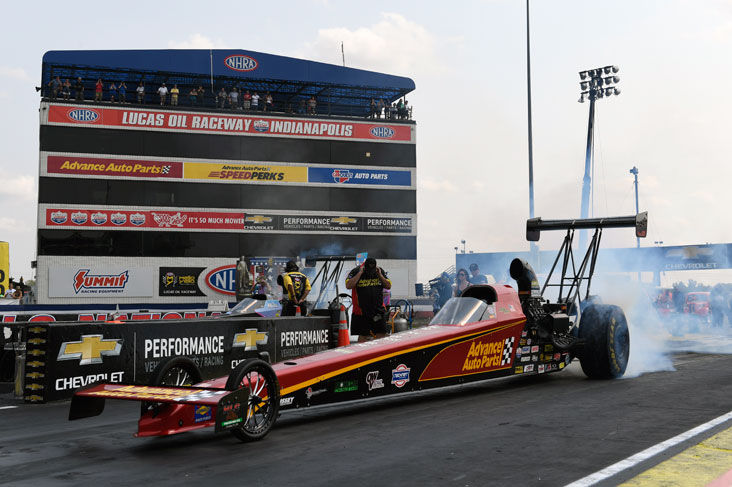 Hart’s fourth win of the 2017 season was easily his biggest. Driving his Advance Auto Parts dragster, Hart came from the No. 3 qualifying spot to the final, where he took a 5.307 to 5.364 win against Megan Meyer in Top Alcohol Dragster. Hart opened eliminations with a 5.193 in his win against Kim Parker and also scored victories over Kirk Wolf and Jeff Veale. Meyer also ran a 5.19 during eliminations and later stopped teammate Justin Ashley to reach the final. [Watch video] 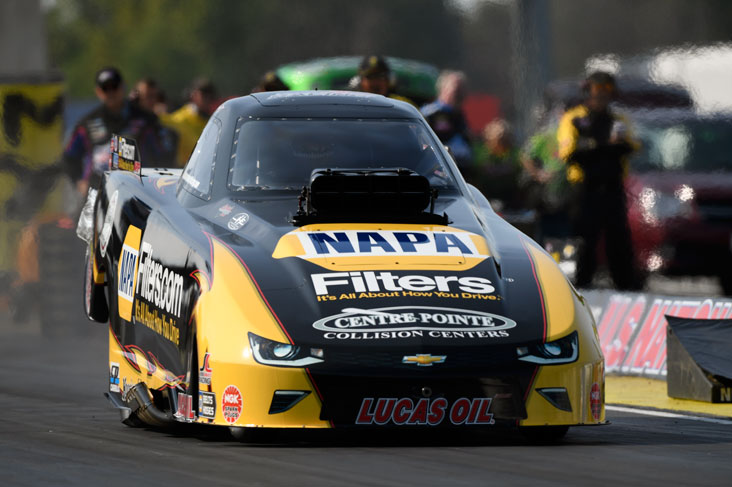 Lombardo also came from the No. 3 qualifying spot to win the Top Alcohol Funny Car title in his NAPA Auto Parts Camaro. After a 5.507 win against Tyler Scott, Lombardo, whose father, John, drove the famed Blue Max to the Indy Funny Car title in 1985, improved by a tenth with a 5.409 win against Ulf Leanders. After stopping Annie Whiteley in the semi’s, Lombardo capped off the victory with a 5.485 to 5.715 win against Doug Gordon in the final. [Watch video] 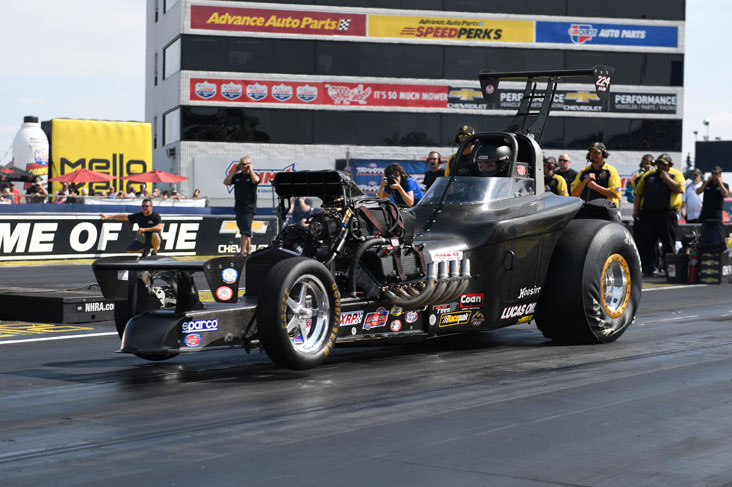 Plourd had made very few runs behind the wheel of Harry Schwartz’s wild AA/AM roadster before arriving in Indy for the Big Go, but that didn’t stop him from turning on six win lights to claim the Comp title, his third Indy win and the 20th of his career. Plourd’s toughest challenge came in the quarterfinals when he was paired with former national champion and low qualifier Frank Aragona Jr. Plourd won the bout with a very competitive (-.607) 6.41, but he also caught a break because Aragona had lost nearly two-tenths off his index due to repeated Competition Index Control violations. After a semifinal bye, Plourd was able to sit on the starting line and watch while opponent Mike Farrell fouled by five-thousandths in the final. [Watch video] 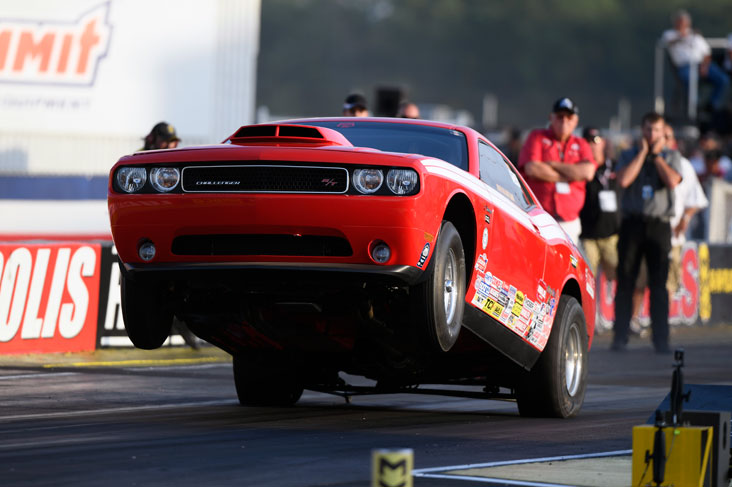 Helms is already on track to win his fifth national championship in Stock, and now he may well win the Super Stock championship following his win in that category, his third overall U.S. Nationals victory. Helms drove the Southland Dodge Drag Pak Challenger to a final-round win against Marion Stephenson. After a big wheelstand, Helms drove to a 9.122 on his 9.10 dial for the win. Stevenson was also .02-second off his dial with a 9.737. With the win, Helms moved into second place in the Super Stock standings, just 23 points behind current leader Justin Lamb. [Watch video] 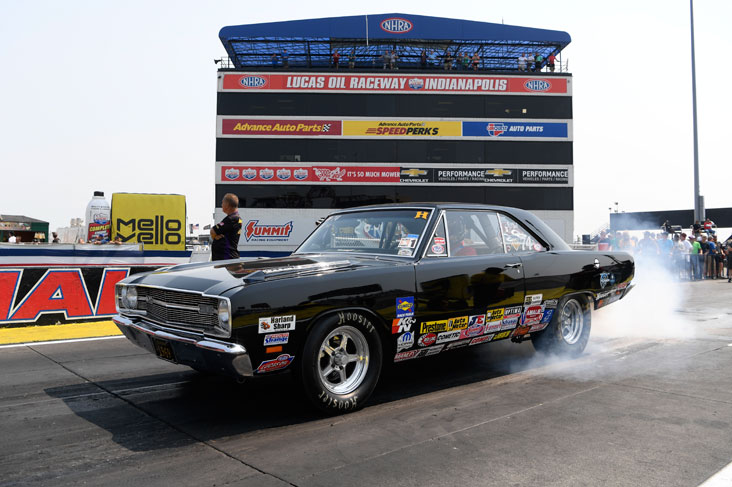 The Stock final was a class racer’s dream with Gilley taking on Darrel Steiger in a heads-up, no-breakout battle of E/SA Mopars. Gilley, in his ’69 Dart, took on Steiger, in his ’70 Challenger, in Thursday’s class final, and Steiger claimed a narrow win, but Gilley returned the favor on Monday afternoon with a holeshot win, 10.622 to 10.619. Gilley was just a hundredth of a second quicker off the starting line, .022 to .032, making the final margin of victory just .007-second. Both Gilley and Steiger had their work cut out for them just to reach the final, with Steiger taking out Dan Fletcher with a near-perfect light and Gilley taking out fellow Division 7 racer Steve Wann in another close battle. [Watch video] 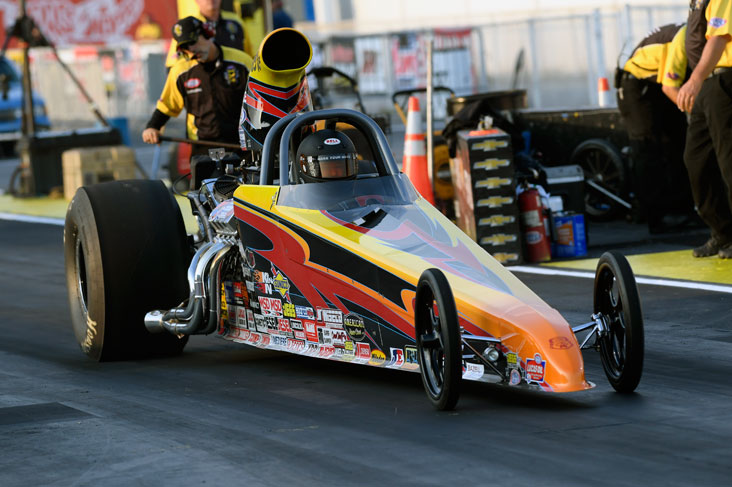 A pair of past national champions squared off to decide the Super Comp title with Connolly taking a narrow win against Edmond Richardson. Both Connolly and Richardson had previously won the sport’s biggest event, but Connolly added a second title with a close 8.931 to 8.937 victory. Richardson was off the starting line first by three thousandths, making the difference at the finish line just .003-second. [Watch video] 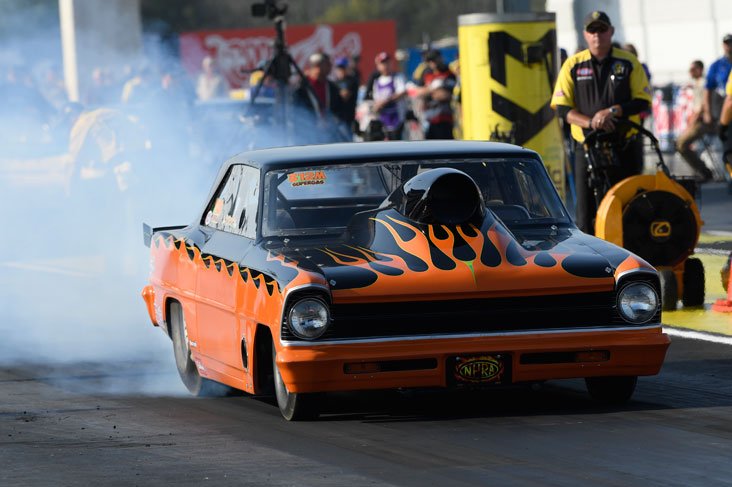 Appearing in his first national event final, Adams earned his first title in Super Gas when he stopped Samantha Coughlin in another side-by-side final round. Both Adams and Coughlin, the wife of five-time Pro Stock champ Jeg Jr., recorded matching 9.920 elapsed times in the final. The difference was Adams’ .006 to .029 reaction-time edge off the starting line. [Watch video]