Brittany Force joins Shirley Muldowney as the second woman to bring home a Mello Yello Top Fuel championship. She turned on the win light against Richie Crampton in the second round following Steve Torrence’s loss to Antron Brown to clinch her first-ever title. The pilot of the Monster Energy Dragster ran back-to-back 3.6s on raceday to bring home the first Top Fuel championship for John Force Racing.

“I can’t believe we’re here, it just seems like a dream,” said Force. “And the reason we are here is because of that Monster team. Everyone at that JFR team, and my family. We struggled. We had our ups and downs. But we pulled together. My crew chiefs, Alan Johnson and Brien Husen are the reason we’re here. They never gave up on me and always had my back and kept pushing for more.” 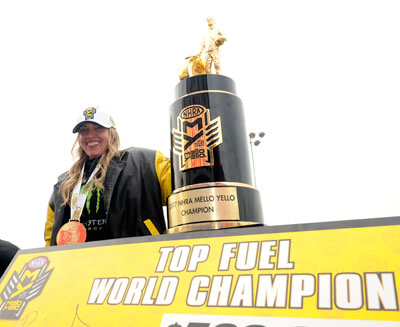 Force entered the Countdown for the Championship in the No. 6 position after struggling in the early part of the season. The team made a major chassis change, which proved fruitful almost immediately. She picked up her first win at Epping during the Eastern Swing, and from there started to climb the standings.

Once Force got into the Countdown, she immediately became a title contender. She reached the semi’s in the Countdown-opening race in Charlotte, and went on to win in the next race in Reading. That’s one of two wins she enjoyed during the playoffs, as she also won in Dallas alongside teammate Robert Hight. That’s the second double-up in John Force Racing history.

“I have to thank my dad, and my family. This is a very proud moment,” said Force. "My dad is the one that gave me this opportunity, and I wouldn't be out here without him."

Consider this the “third” double in JFR history, as she joins Hight as a 2017 champion. This is the first time two cars out of the famed racing shop have won in the same season, as Hight and Force bring home the 18th and 19th titles in team history. Force won the Auto Club Road to the Future Award, which highlights the year’s top rookie, in 2013.