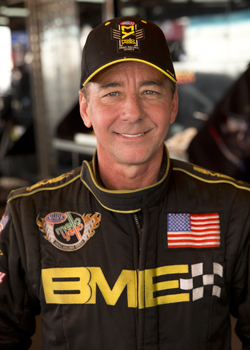 Troy Buff came as close as he ever has to winning his first Top Fuel race at the most recent event in Las Vegas. Buff eventually lost in the final round to defending world champion Antron Brown, but the Houston-area native was overwhelmed by the support he received by his first career Top Fuel runner-up finish.

“My phone is still ringing off the hook,” Buff said. “I’ve gotten nonstop texts and phone calls. I really thought we were going to win. I’ve definitely had a good feeling the last couple years. (A win) hasn’t happened yet but I know it’s going to happen.”

Buff appears closer than ever in his BME dragster and the chance for a storybook celebration now seems within the realm of possibility. Buff first raced at his home track, Royal Purple Raceway, in 1981 and he has the opportunity to claim his first Top Fuel victory there April 29-May 1 at the 29th annual NHRA SpringNationals.

The tradition-rich race near Houston is the sixth of 24 races during the 2016 season and it is an event Buff definitely has circled on his calendar. He has claimed three NHRA Lucas Oil Drag Racing Series wins in his Top Alcohol Dragster career, but none came in Houston.

With the momentum from his final-round appearance in Las Vegas still fresh, Buff and his team, led by team owner and crew chief Bill Miller, are riding high heading into Royal Purple Raceway. The next step is carrying that momentum into a memorable stretch in the ultra-talented class.

“I’ve never won a Houston national event and I want to really bad,” said Buff, who moved to 12th in points with the runner-up showing in Vegas. “It’s really cool to have all your family and friends there. You figure it’s probably going to be pretty warm and that’s our kind of track.

“If it’s hot like Vegas, we can run in the 3.80s and have success. We’re close to running in the 3.70s in the right conditions but this is such a humbling sport. You can go from hero to zero real quick.” 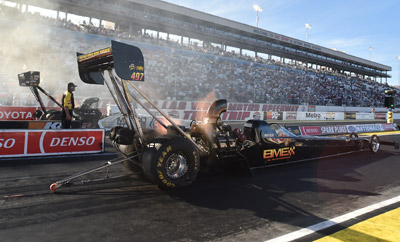 Troy Buff, near lane, fell just short against Antron Brown in the Top Fuel final round in Las Vegas.

Buff enjoyed his run as the hero in Vegas, but the showing, which included round wins against class standouts Richie Crampton, points leader Brittany Force and J.R. Todd, has been in the works for a while.

Buff debuted a new car this season and they also tested for the first time in a number of years, making several preseason passes in Phoenix. The testing wasn’t impressive as far as results, but Buff and his team found out what the car didn’t like. They worked from there and the progress has been impressive ever since.

“The guys have really pushed me and I know I have to continue to step up and do a better job,” Buff said. “But I know I’ve got a car that can consistently go down the track and that’s just huge in every aspect. We have a new car for this year and that’s been a big bonus for me. I feel comfortable in the car, it does what I tell it to and it goes right where I want. That’s helped everything – confidence, reaction times, consistency, you name it.”

A more confident Buff has led to improved consistency, with the next goal being to inch his way toward running in the 3.70s. That may not happen in Houston, but Buff knows he can compete with the best in Top Fuel.

That starts with defending champion Brown, who chased down Buff in Las Vegas for the victory, as well as class stars Tony Schumacher, Brittany Force, two-time Houston winner Doug Kalitta, Winternationals winner Steve Torrence and Shawn Langdon. Buff, though, loves the direction his team is headed, in part because of how well everyone has worked together.

Buff believes wholeheartedly that a win is coming soon, a belief shared just as enthusiastically by a team making strong improvements.

“We’ve got a really good team,” Buff said. “Everyone is really positive and I just really like working with all of them. I’ve always been a pretty positive person, but just being around these guys helps me stay positive and all of them have a great attitude about winning. It’s a great bunch of guys on this team and they all do a great job. It really just makes me want to work even harder. Our goal is to win a race this year and I really believe that it is going to happen.”

The first round of Mello Yello Drag Racing Series qualifying will start at 4:30 p.m. on Friday followed by the night session that will begin at 7 p.m. The final two rounds of qualifying will take place Saturday, April 30 at 1 and 3:30 p.m. Final eliminations are scheduled for 11 a.m. on Sunday, May 1.

For the Friday night qualifying session there will be a special pre-race ceremony highlighting some of the nitro stars and will feature a special Ladies Night promotion. All female spectators will receive free admission with a reserved seat on the spectator side of the track. This offer is available for walk-up ticket purchases only. In another promotion, kids 13 and under are free in general admission areas with a paid adult ticket.

To purchase general-admission or reserved seats, call 281-383-7223 or visit www.royalpurpleraceway.com.