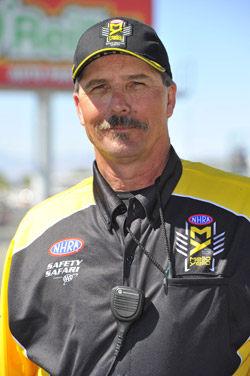 Mike Gittings, most recently the chief starter in NHRA’s Northwest Division and a certified team member of the NHRA Safety Safari presented by AAA, has been named the official NHRA Chief Starter, one of the most storied positions in all of NHRA Drag Racing.

Gittings will begin his tenure at the important post starting with the Summit Racing Equipment NHRA Southern Nationals, May 13-15 at Atlanta Dragway in Georgia.

Gittings served as the interim Chief Starter under difficult circumstances in early April at the Denso Spark Plugs NHRA Nationals in Las Vegas following Lyle’s sudden death during a swimming accident on March 27 while on vacation in Mexico.

“It’s emotional taking over this position because I stood behind Mark for all those years,” Gittings said. “But I learned so much from him, and I know he would want me to do this. I have had involvement in the sport of NHRA Drag Racing at many levels, from being a grassroots racer to event worker to managing races and working with sponsors. I am looking forward to this challenge, and I want to do a great job and always remember Mark when I am out there.”

Gittings was the NHRA Northwest Division starter since 2012 and was a member of the Northwest Division certification team, a race master, and starting-line track-prep worker since 2007. From 2000 to 2007, he worked as the starter at Pacific Raceways in Seattle, and prior to that, he was a track employee there and the 1998 Pro category track champion.

“Mike worked very closely with Mark over the years, and we feel he is ready for the challenge,” said Graham Light, NHRA senior vice president of racing operations. “Through his years of experience as the Division 6 and Pacific Raceways chief starter, Mike has earned the respect of the racers and acquired the skills necessary to handle this very demanding and critical position.”

Mike Gittings served as the interim Chief Starter in April at the Denso Spark Plugs NHRA Nationals in Las Vegas.