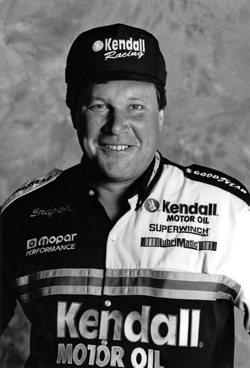 Etchells, of Putnam, Conn., earned 13 NHRA Funny Car victories during his driving career and 15 as a team owner. He is best known for driving the Kendall Oil Dodge Daytona to the sport’s first four-second Funny Car run in 1993.

Etchells began his career bracket racing in the Northeast with a D/Gas Dodge in 1974 before he and brother Gary started campaigning the Future Force Chevy Monza Funny Car in 1979 that they purchased from Bruce Larson. Etchells mainly raced locally, and his fortunes began to change when he teamed with Paul Smith in 1987. He scored his first win in the Future Flash Chevy Beretta when he defeated Johnny West in the final of the 1990 NHRA Summernationals in Englishtown.

Etchells’ breakthrough season was 1992, when he hired Maynard Yingst to tune his Nobody Beats the Wiz Dodge Daytona. While Cruz Pedregon and John Force had a championship battle for the ages that season, Etchells emerged toward the front of the pack with event wins in Englishtown and Denver and at the season-ending event in Pomona that earned him his first of seven consecutive top-five finishes as a driver despite not beginning his season until the Gainesville event.

After Yingst’s untimely passing due to a brain aneurysm at the Houston event in 1993, Tim and Kim Richards went to work for Etchells on the Kendall Motor Oil Dodge Daytona in a season full of notable accomplishments. Etchells made NHRA history by becoming the first Funny Car driver to record a four-second elapsed time with a 4.987 e.t. during Friday qualifying at Heartland Park Topeka. He earned the prestige and the $25,000 reward that was put up by Force sponsor Castrol. Etchells was runner-up to Force for the championship that season despite operating on a shoestring budget that Richards estimated at $260,000 and running parts purchased mainly from Joe Amato. 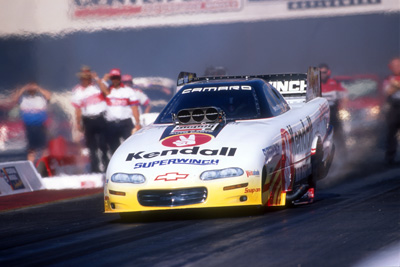 In 1994, John Medlen took over as crew chief for Etchells while Richards went to work for Connie Kalitta. The result was a No. 4 finish in the standings before Medlen went to work for Force and Etchells reunited with Richards. Etchells scored at least one win and a top-five finish from 1995 through 1998, including three wins in 1998, before he took a hiatus from driving and put Whit Bazemore behind the wheel.

As a team owner, Etchells added two wins to his total of 13 as a driver. Bazemore won the Sonoma event in 1999 and finished No. 3 in the points standings. Richards left the team during the 2000 season, and Bazemore won the Denver event and qualified No. 1 at all three races of the Western Swing with Terry Manzer handling the tuning chores.

The following season, after Bazemore was offered a ride at Don Schumacher Racing, Etchells made a comeback behind the wheel and fielded two entries, with Jim Epler driving the other. He posted a semifinal finish at the season-opening event in Pomona and qualified for 14 of 21 events. His final race was at Maple Grove Raceway that season before he hung up his helmet for good.

Etchells is survived by his wife, Shelley, and his daughter, Erica. Funeral arrangements have not been made at this time.