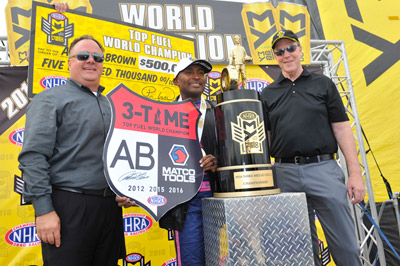 Brown has been the dominant Top Fuel racer this season, winning seven times in 11 final-round appearances and tallying an amazing 51 round-wins through the first 22 events. Though he has done well all season, Brown has been particularly strong during the Countdown to the Championship. Brown entered the playoffs ranked No. 1 and never surrendered that position, thanks to an effort that included wins in Charlotte, Reading, and Dallas. He also qualified No. 1 in Dallas, an event that he dominated to all but shut out the rest of the competition in the championship chase, leaving Texas with a 150-point advantage.

In addition to his three playoff wins, Brown also tallied victories at the spring Las Vegas event, Epping, Chicago, and Seattle. Brown’s initial season win in Las Vegas lifted him to No. 2 in the points, and he never dropped out of the top three from that point forward, taking the top spot in Chicago and staying there for the remainder of the season. In addition to his four wins, Brown’s regular season also included four runner-up finishes and two No. 1 starts.

Brown made history in 2012 when he won his first Mello Yello world championship to become the first African-American NHRA world champ and first black driver to win a major U.S. auto racing championship title. Brown added a second title last year when, much like this season, he dominated the Countdown and locked up the championship at the second-to-last event, in Las Vegas.

“Brian [Corradi] and Mark [Oswald] and our entire team has worked so hard and I’m just privileged to drive that race car for Don Schumacher Racing because Don makes it all happen,” Brown said. “When you come to a sport with all this access, it makes dreams like mine, a kid from New Jersey, come true. My dad, uncle, everybody, they instilled it in me at a young age, work hard and you can make great things happen.”