Sunday News and Notes from the Texas NHRA FallNationals 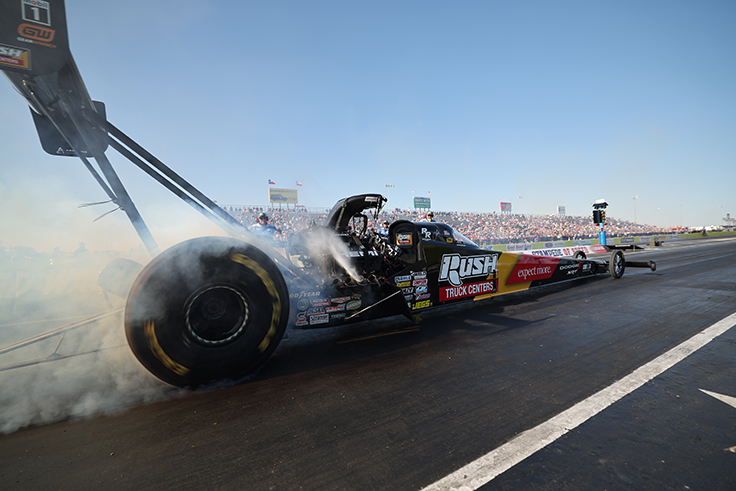 After a two-hour, 20-minute delay due to morning rain, round one of Top Fuel kicked off with a stunning result, Josh Hart fouling away a 3.707 to Leah Pruett, whose Rush Truck Center dragster slowed to a 3.88 at just 229 mph. It was Pruett’s first round win since Topeka after five straight opening-frame losses. 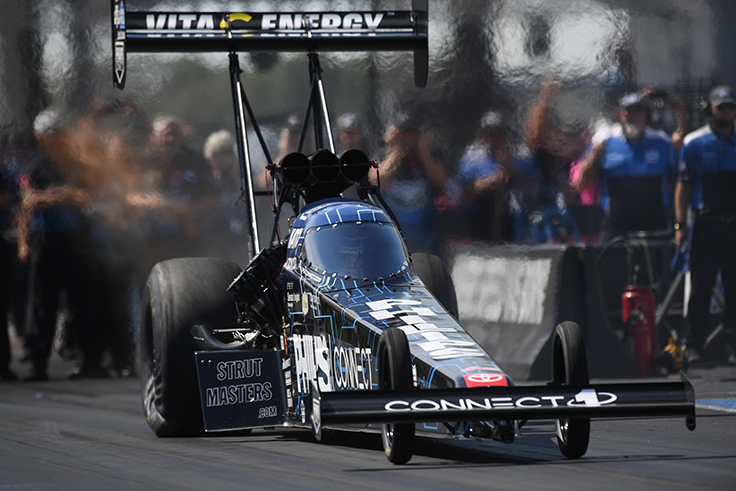 Points leader Justin Ashley, who looked great Friday with an opening lap of 3.766 to lead the field after Q1 but struggled on his next two runs, showed that crew chief Mike Green was not lost as the Phillips Connect dragster ripped to a 3.699 to beat Doug Kalitta.

Kebin Kinsley, who was offered the chance to drive on Wednesday after Cory McClenathan had to withdraw due to medical issues, scored a major upset over Clay Millican when Millican’s Parts Plus dragster exploded the supercharger while leading Kinsley’s Dexter Tuttle-owned RevChem/Nordic Boats machine. Kinsley actually won the race on a holeshot. 3.799 to 3.797 thanks to a .030 to 062 starting-line edge.

Brittany Force kept the pressure on points leader Justin Ashley by winning her first-round race with a 3.72 at 336.30 mph, which broke the track speed record of 335.75 that she reset Friday night. 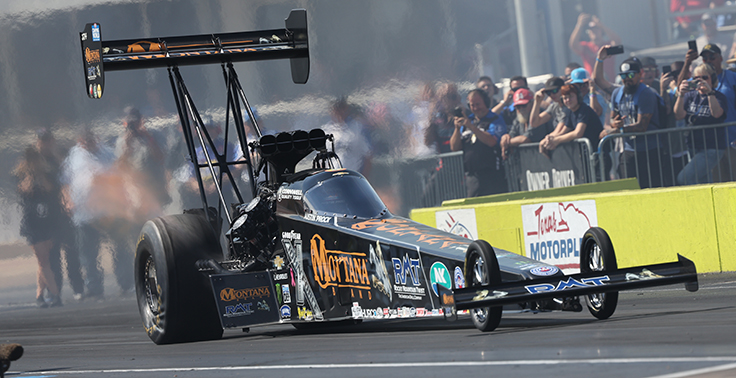 Low qualifier Austin Prock, who beat Alex Laughlin, has a chance to make some real hay in the standings. Prock, who opened the playoffs with a win in Reading then nosedived since, can take advantage of the losses by the No. 6, 7, and 8 drivers (Josh Hart, Doug Kalitta, and Clay Millican) and could get as high as sixth if he wins the race. 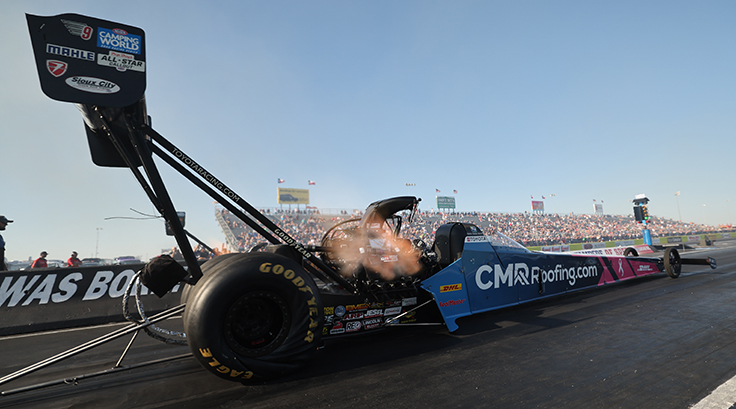 The points race got an even bigger shakeup when Shawn Langdon upset four-time and second-place Steve Torrence in round one. Torrence’s loss and Force’s win allowed Force to move around him into second place. Add in No. 4-ranked Mike Salinas' apparent double-step red-light against Spencer Massey and the complexion of the points battle shifted substantially. 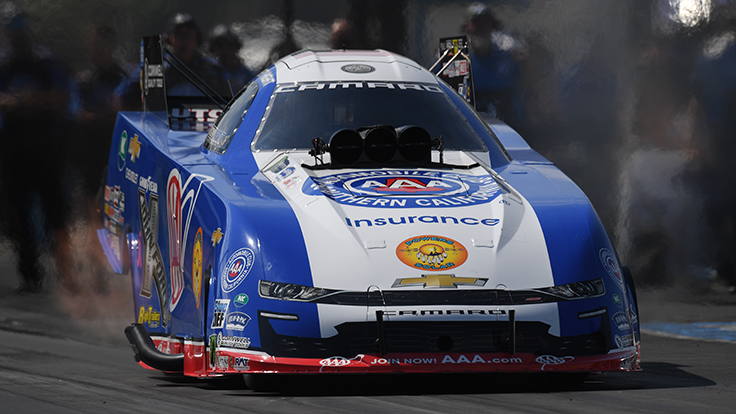 Unlike in Top Fuel, the top three points frontrunners -- Robert Hight (3.889), Ron Capps (3.889), and Matt Hagan (3.875) -- all advanced to round two. Hight got a solo when Jack Wyatt was shut off on the starting line while Capps bested centerline-crossing Jeff Diehl and Hagan trailered Terry Haddock.

Points leaderHight remains the only Funny Car driver without a first-round loss this season, a perfect 20-0 in the opening stanza. 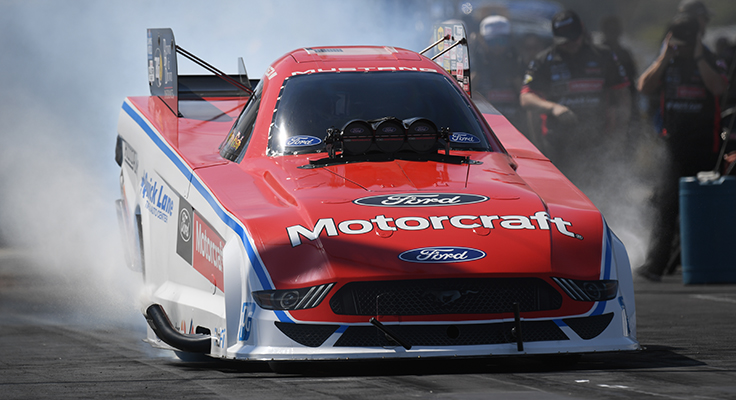 Bob Tasca III, who ran a pair of 3.8-second clocking in qualifying, had the best performance of the first round with a sizzling 3.856 in taking down Jim Campbell. He'll have second-round lane choice over Blake Alexander.

Although fourth-place John Force will get credit for a 3.92 holeshot win over Cruz Pedregon’s 3.90, Force, as per usual. was deep-staged and his crew chief Danny Hood predicted that he also probably ran a 3.89. Regardless, the win keeps alive the chance of drag racing’s GOAT winning career world championship No. 17.

Matt Hartford took advantage of the surprising DNQ of Dallas Glenn to move into sixth place after Camrie Caruso red-lighted against him. He probably won’t get much higher as the top five in front of them all advanced to round two and one of them, points leader Erica Enders, is his next opponent. 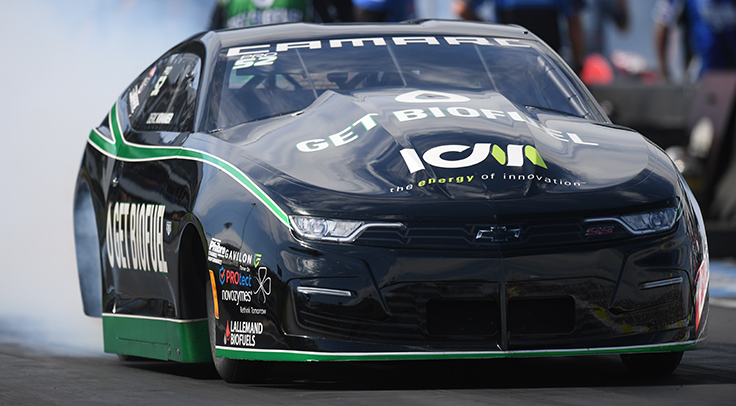 Deric Kramer, who came into the event disappointingly outside of the Top 10, has a golden opportunity to make a deep run into the standings after losses by the eighth, ninth, and 10th place drivers in front of him. A second-round win would boost him as high as eighth place. 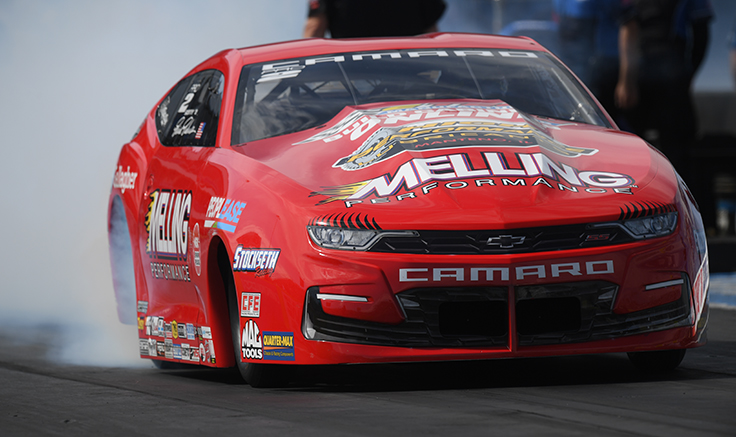 After dominating qualifying, having the best and second-best runs in each of the four qualifying sessions, Erica Enders and Aaron Stanfield had the best two runs of the first round, Enders running a stout 6.539 to beat Fernando Cuadra Jr. and Stanfield racing to a 6.555 to defeat Shane Tucker.

Pro Stock Motorcycle low qualifier Angelle Sampey, who had been very critical of herself for riding mistakes that have hobbled her Vance & Hines/Mission Suzuki, couldn’t do much to prevent a first-round loss as the black screamer drifted hard towards the centerline. Despite her best efforts, she clipped the finish line block and was disqualified, handing the win to Ryan Oehler. 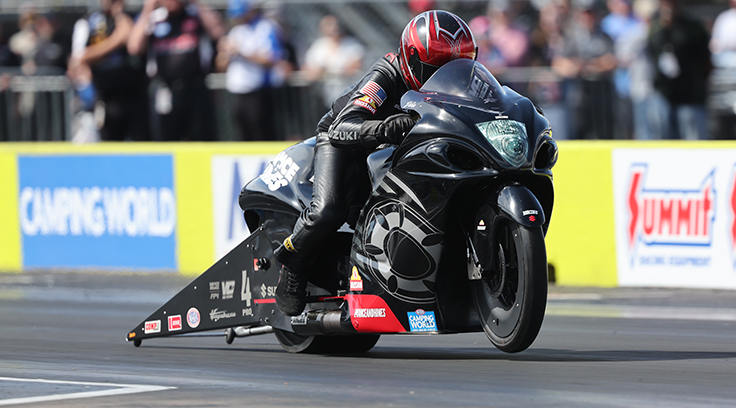 Sampey’s teammate, Eddie Krawiec, beat Chris Bostick and moved past Sampey in the standings, from sixth to fifth. Krawiec, the four-time world champion, is still gunning for his milestone 50th career win. Krawiec last won at the U.S. Nationals in 2021.

Action was halted by rain with one pairing remaining –- Matt Smith vs. Karen Stoffer -– and Smith was pretty hot at missing the chance to run, taking a pointed shot at Sampey for driving “over her head” and hitting the finish-line block.

Twenty minutes after, the two saddled up and Smith raced to the win. 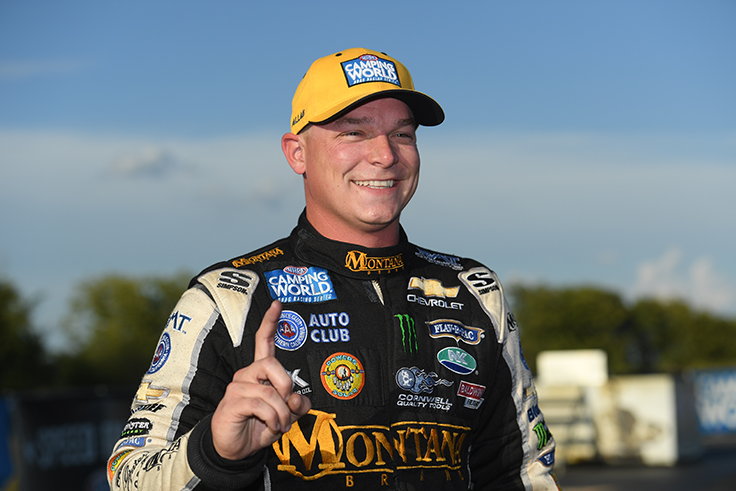 Low qualifier Austin Prock made his second straight 3.73-second pass to send Leah Pruett home and move a step closer to climbing another rung. A semifinal win would boost him to seventh place. 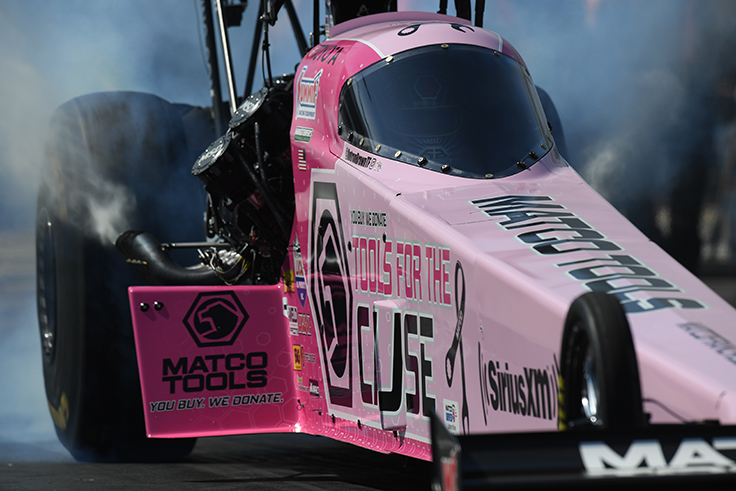 Antron Brown, Prock’s next-round opponent, also was steady, backing up a first-round 3.68 with a 3.69 to end Spencer Massey’s day and pull to within two points of second-place Brittany Force.

Points leader Justin Ashley showed that’s he’s definitely still in championship form, whipping out a 3.677, which is low e.t. of the meet, to end Kebin Kinsley’s Cinderella story. No matter what happens through the rest of the event, Ashley will leave as the points leader. 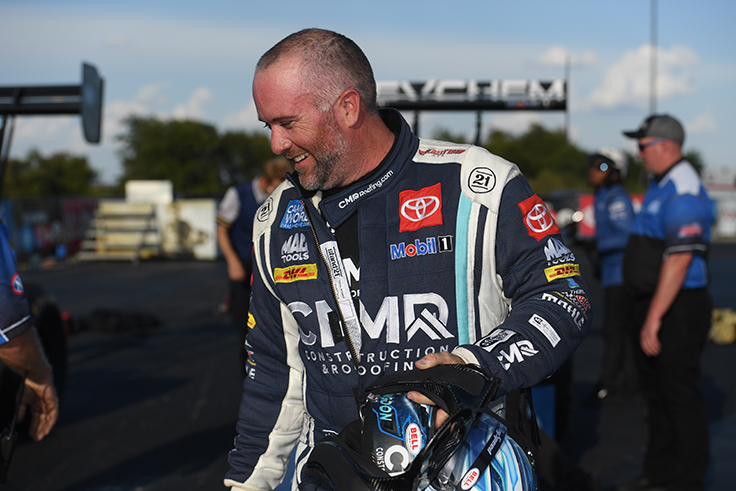 There were plenty of smiles around the top end when Shawn Langdon defeated Brittany Force on a holeshot, and it wasn’t just Langdon smiling as everyone fears what Force’s Monster Energy team is capable of. Langdon was a brilliant .039 on the tree to Force’s subpar .097 and Langdon’s CMR Roofing entry took the win, 3.721 to 3.676, which took low e.t. away from Ashley. 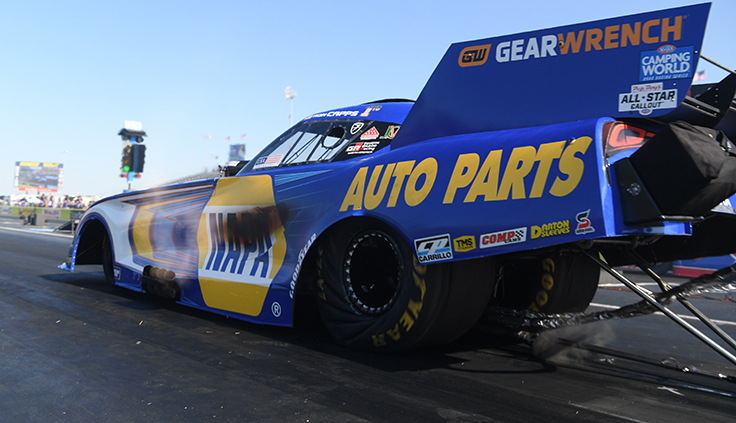 With just four spots in the semifinals and the top five still in action, you knew someone was going to be left without a seat when the music stopped and that happened to be John Force, who fell to Ron Capps.

In the other three heats, points leader Robert Hight blasted to a 3.901 to beat Paul Lee, Matt Hagan was quicker with a 3.883 to trailer Tim Wilkerson, and, Bob Tasca III, as he was in round one, was quickest of the frame with a 3.861 to best tire-smoking Blake Alexander. 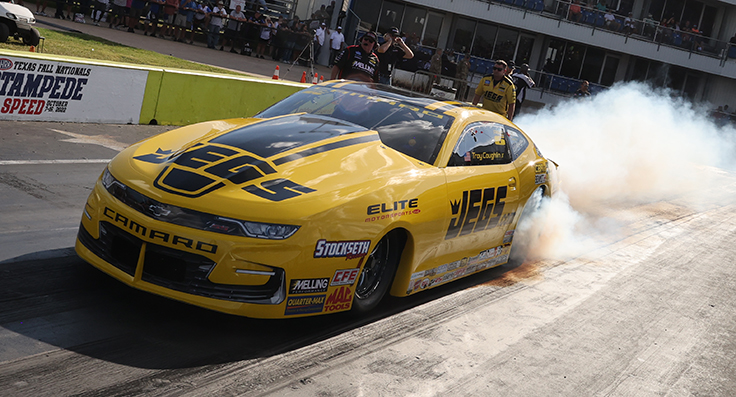 In a key battle for third place Troy Coughlin Jr. defeated Kyle Koretsky and took over third place from him as the result of a close 6.574 to 6.575 decision. The news got even worse for Koretsky as Greg Anderson followed with a win over Cristian Cuadra to bump Koretsky from fourth to fifth. Anderson sits just one point behind Coughlin heading to the semifinals, but they’re on opposite sides of the ladder.

As expected, Erica Enders and Aaron Stanfield also advanced to the semifinals with respective wins over red-lighting Matt Hartford and Deric Kramer (a narrow .006-second win for Stanfield), meaning that the final four will be three Elite Performance-powered cars — Enders, Stanfield, and Coughlin — versus the KB Racing flagship of Greg Anderson. 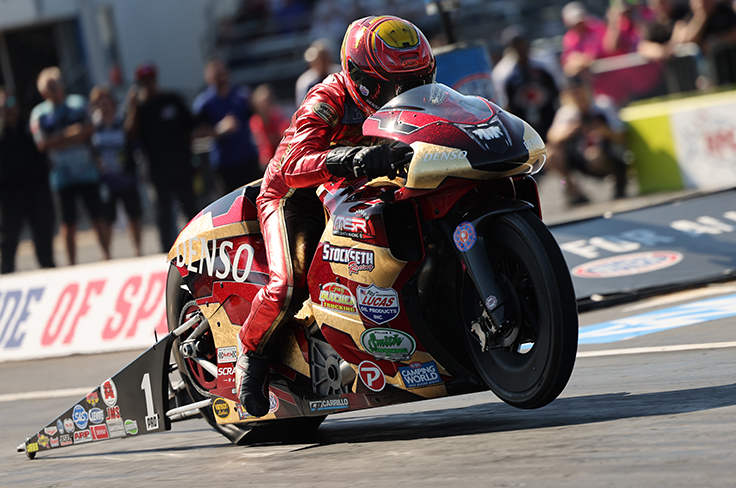 Pro Stock Motorcycle points leader Matt Smith must be looking behind himself and suddenly asking himself, “Where did everyone go?”

Smith, who came into eliminations with a 31-point lead over Joey Gladstone, will leave with a lead of no less than 51 and as much as 158 after second-round losses by Joey Gladstone and Angie Smith, who were second and third behind him.

Smith defeated Eddie Krawiec in their semifinal race while his wife, Angie, had to roll out of the throttle after closing fast on the centerline against Hector Arana Jr., and Gladstone went red by .013-second to Steve Johnson. 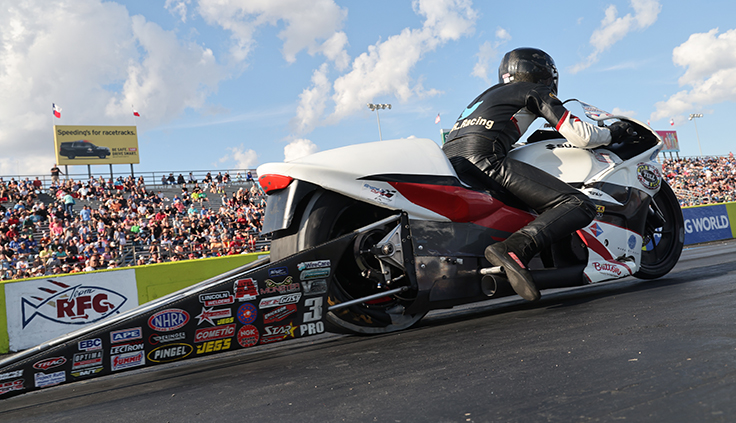 With his semifinal win over Gladstone, Steve Johnson passed Angie Smith for third place in points, but that’s as high as he can get this weekend. 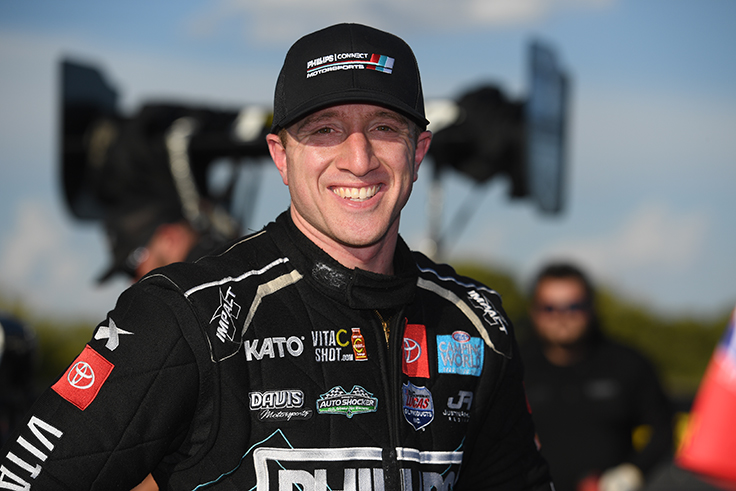 Austin Prock and Antron Brown were both spectacular .045 on the Tree in their semifinal  Top Fuel duel and the .008-second winning margin was decided by e.t. in favor of the low qualifier, Prock, 3.681 to 3.689.

Justin Ashley continued to pile on the points, nailing a tremendous .020 reaction time and running a 3.686 to defeat Shawn Langdon.  Brown’s loss means that Nos. 2 through 8 coming into the day are gone and Ashley will leave Dallas with a points lead of at least 76 points and as much as 96 if he wins the final. 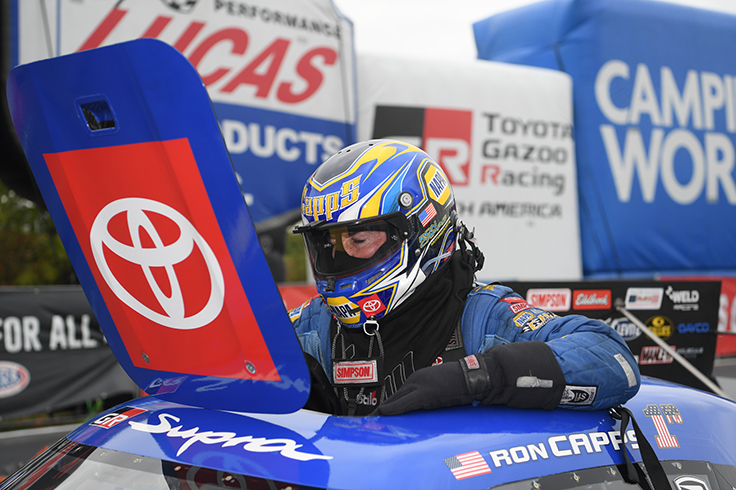 Points leader Robert Hight unexpectedly smoked the tires against second-place Ron Capps, but Hight is still guaranteed to leave with the points lead. If Capps wins the final, the lead will be 10 points; if Matt Hagan beats Capps, Hight’s lead will be 58 points.

Hagan reached the Funny Car final round over Bob Tasca III with a tremendous blast of 338.02 mph, the 10th fastest run in class history and the fastest in three years, since Ron Capps ran 339.28 in  Reading in 2019.

Hagan will have final-round lane choice based on his 3.891 to 3.897 performance advantage over Capps in the semifinals. 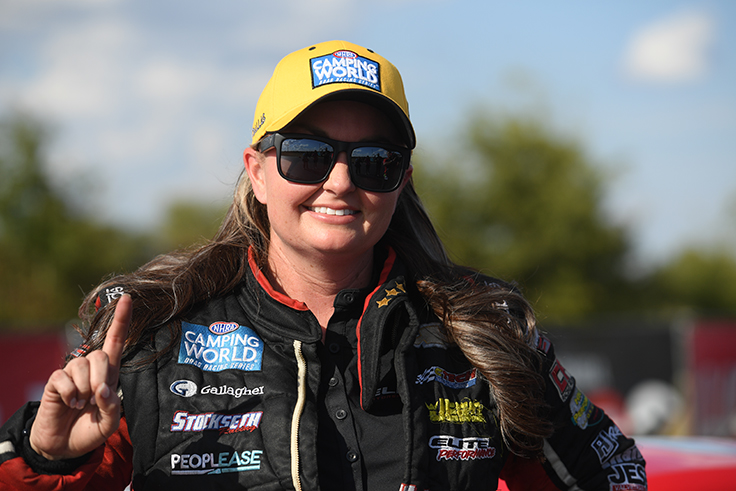 Erica Enders is guaranteed to leave the FallNationals with a lead of 146 points –- her incoming lead was 120 points –- after defeating teammate Troy Coughlin Jr. in the semifinals. Coughlin got a narrow .003-second edge on Enders at the Tree but his car got loose and Enders powered away to a 6.561 win.

Greg Anderson, gunning for career win No. 101, with have to beat his arch-rival in the final to do so and she will have lane choice after his 6.568 victory over Aaron Stanfield.

If Enders can beat Anderson in the final, her lead over Stanfield will be a staggering 166 points with just two races left. 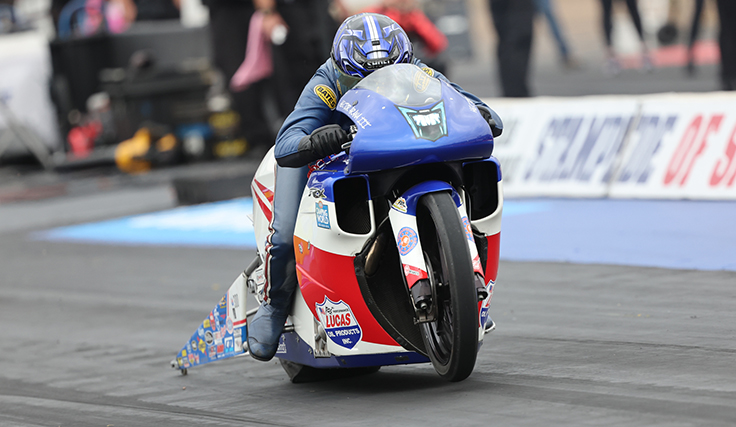 The same snake that bit low qualifier Angelle Sampey in round one and his wife, Angie, in round two claimed points leader Matt Smith in the semifinals as his Denso Buell drifted to the centerline, forcing him to lift and allowing Hector Arana Jr. to reach the final round for the 19th time in his career. The win avenged Arana’s loss to Smith in last year’s final here. Arana’s last win came in Las Vegas in 2019.

Jerry Savoie will be in the FallNationals Pro Stock Motorcycle final for the seventh time in the last eight years after beating Steve Johnson in the semi's. Savoie scored wins in 2015, 2019, and 2020 and three straight runner-ups in 2016-18.