Even after 26 years, Angelle Sampey is her own worst critic. She’s also still hoping to one day make a perfect run. All this from a rider who is the winningest female in NHRA competition, the owner of three world championships and 46 national event wins.
15 Oct 2022
Phil Burgess, NHRA National Dragster Editor
Feature

Even after 26 years, Angelle Sampey is her own worst critic. She’s also still hoping to one day make a perfect run. All this from a rider who is the winningest female in NHRA competition, the owner of three world championships and 46 national event wins.

The frustration came to light Friday night after missing the chance to grab the $5,000 low e.t. bonus money put up by Texas Motorplex for the quickest run of the second qualifying session, Sampey already was in the No. 1 spot after powering the Vance & Hines/Mission Suzuki to a track-record 6.72 pass in the day’s first session, but she double-clutched the engine and ran just 6.80.

“That was my fault,” she readily admitted. “I double-clutched it. That's something that happens every once in a while to every racer. I started to release the clutch, drew it back, and then released it, and your body is not prepared for that, so it lifted me up which upset the motorcycle, which made it lose traction, and we didn't get the money that they were offering, so that was very disappointing. I was looking forward to doing that for my team because I definitely had the motorcycle to do it. But I'm gonna chalk that up as my one mistake I'm allowed for this weekend.” 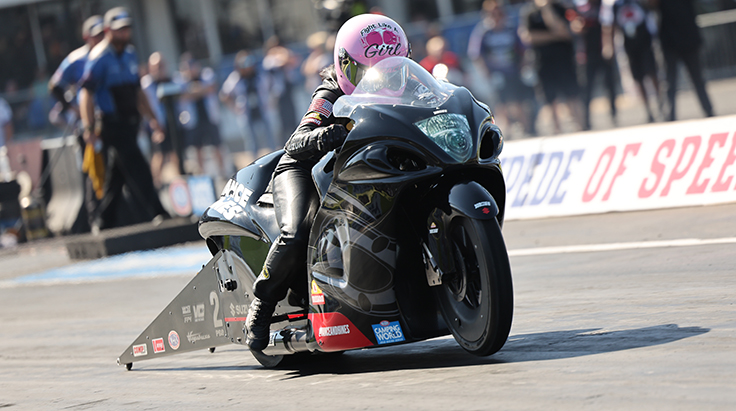 After getting hot in the summer with a runner-up in Bristol, a win in Norwalk, and semifinal finishes in Denver and Sonoma that carried her into the points lead, she’s won just three rounds over the last four races and suddenly finds herself in seventh place.

“Going into the last three races of the year, I have some catching up to do,” she said. “Once again, my mistakes have put me behind because my Vance and Hines/Mission Suzuki is the motorcycle to beat. I just haven't been the rider that it needs. We went testing, which wasn't only good for Andrew [Hines, crew chief] to see what he could do with the tuning, but it was good for me to get some seat time as well. Even after 26 years of doing this, every run down the track helps.”

The high-revving, quick-shifting Pro Stock Motorcycles require sniper-like precision to drop the clutch and nail the shifts while all the time being in the right riding position for maximum traction and minimal air drag.

“The hardest thing about what we do is it's like not a football game, where you have hours to come back, or a NASCAR race when you have hours and laps to come back. We have hundredths of a second and one little, teeny-tiny mistake hurts a run. If I miss a shift, if I'm off by one-tenth of a second, if I’m a little late on the button or a little too soon on the button, or if the bike gets out of the groove a tiny bit and I don't pull it back right away, or even at the finish line if there's a crosswind like we've had a little bit here and you don't have the bike completely straight up and down and you're leaning it just a tiny bit, it scrubs some speed off.

“And the thing that hurts me so bad when I make these mistakes, is that I feel like I'm letting everyone down, especially my team, who work so hard to do what they do. Andrew is amazing, all the guys back at the shop are amazing. Andrew sacrificed his ride this year to be my crew chief and I'm not giving him what he deserves. I'm not giving all of Vance &Hines what they deserve. So, I'm going to keep working. I only have three more races to prove myself this year, but hopefully, they'll have me back next year. I'm going to fight just as hard.”

Even with all of her accomplishments over a quarter-century in the class, the fire still burns hot in Sampey. She hasn't won a championship since winning three straight 2000-2002, and it consumes her, 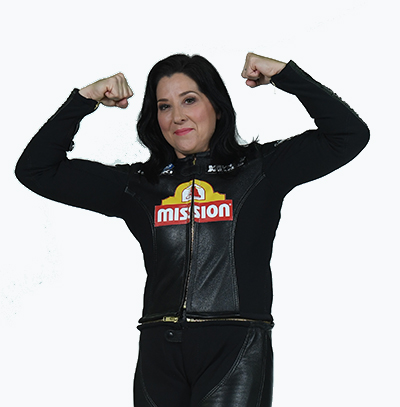 “I think I've shown that I'm trying so hard,” she said. “I'm trying too hard. There aren't words to describe what another championship would mean to me. It's what I want to do before I'm done racing for good, and I have to figure out a way to just stop thinking about that and just enjoy my time out here, enjoy every run on the track. And I try to talk myself into that every time [the media] interviews me, every time I post anything on social media. I'm reminding myself of how lucky I am to be the rider of this Vance & Hines/Mission Suzuki and just enjoy the ride and stop worrying about everything. But it's just hard when you want it as bad as I do. I haven't lost the passion for winning for 26 years. It's only grown. I thought for sure by now it would be no big deal — if I win, I win, if I don't I don't and I still get to go home happy and healthy with a beautiful family. But I want to win it, even more, today than I did 26 years ago.

“The first win as a mom [Englishtown 2016] was the biggest win for me, but if I could win a championship with both my daughters watching, that would be amazing. I'm not gonna give up; no matter how many times I fall, I’m picking myself up and I'm gonna keep going.”