Stampede of Speed will return to enhance fan experience around FallNationals

The Stampede of Speed, a 10-day festival of music, drag racing, and amazing fan experiences in advance of the NHRA Texas FallNationals, will return in 2022 to the historic Texas Motorplex.
09 Aug 2022
Posted by NHRA.com staff
News

The Stampede of Speed, a 10-day festival of music, drag racing, and amazing fan experiences in advance of the NHRA Texas FallNationals, will return in 2022. Hosted once again at the historic Texas Motorplex, the multi-use facility located just 35 minutes from Dallas and Fort Worth, as well as in downtown Waxahachie, the Stampede of Speed will feature non-racing activities, concerts, educational, and business events for fans from across the country. 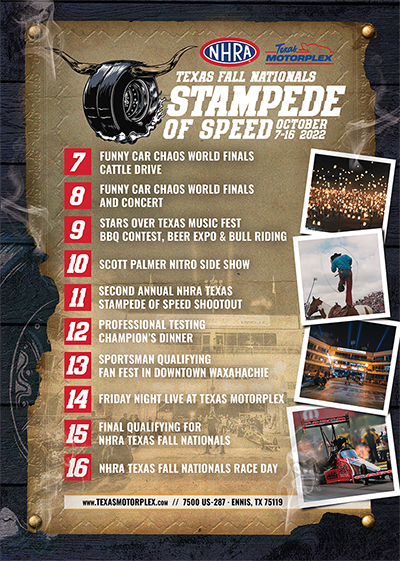 [See the complete schedule at stampedeofspeed.com]

“Last year, we took a leap of faith with the Stampede of Speed, and it paid off with thousands of fans coming to Texas Motorplex, Waxahachie, and Ellis County for 10 days of racing and entertainment,” said Christie Meyer Johnson, Texas Motorplex co-owner. “Over the next two weeks, we will be unveiling new events, a major country concert line-up, fan contests, and additional elements, making the second annual Stampede of Speed even bigger than last year. Our goal is to welcome visitors to the great state of Texas and introduce them to our facility, the NHRA playoffs, and high-quality family-friendly events.”

“We are thrilled to bring Brett Young to the Stars Over Texas Festival as well as a host of talented country music stars,” said Meyer. “Sunday will be a jam-packed day of everything Texas, from bull riding to BBQ capped off with a beautiful lantern release to light up the Texas sky. We’ll have some racing action between the artists to show off what Texas Motorplex has been known for over three decades. I can’t think of a better way to wrap up the opening weekend of the Stampede of Speed.”

The Stampede of Speed event calendar will feature ticketed and non-ticketed events leading up to the NHRA Texas Fall Nationals. Fans can visit www.stampedeofspeed.com for more information.