Female Pro Stock pioneer Shay Nichols: A life well lived (and then some)

Among the many great joys I get in crafting this column beyond getting to share the stories of our sport’s legends and trailblazers is the chance to speak with them. Despite my best sleuthing (and I’m pretty good at that), sometimes it’s hard to track people down (or know if they’re even still alive), and every so often someone that I couldn’t find reads something I wrote about them and reaches out to say “thank you” or offer to share more of their story. 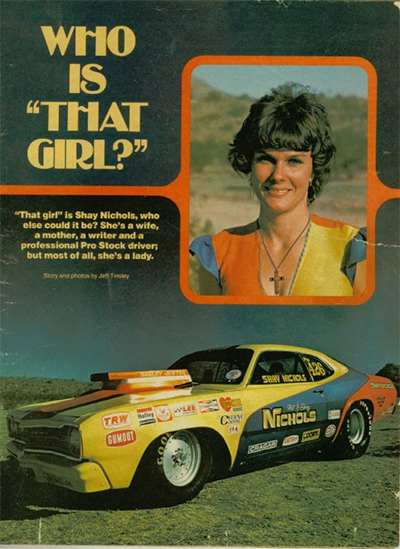 Such was the case last week when Shay Nichols reached out to me after the piece I wrote two weeks ago about the women of NHRA Pro Stock racing. I had written that Nichols — now Shay Hoffman — was one of the first women to compete in the class, alongside Shirley Shahan, based on the fact that both had made their NHRA national event debuts at the same event (the 1971 Springnationals in Dallas), and she wanted to clarify the point that she was the first female Pro Stock driver with some background information, which I was more than happy to do.

“I'm not calling to try to get something I don't think is pertinent, just maybe something you didn't know,” she explained. She had me at hello. I was all ears.

Because all of my information on her in that column had come from a 1975 interview she did with the late Jeff Tinsley for Drag Racing USA magazine, there was plenty more to the story, and she also gave me a rundown of her life after drag racing, a life well lived and widely diversified with the kind of accomplishments most of us can only dream about. I’ll get to that later, but first, let’s revisit the infancy of the Pro Stock class.

Although NHRA Pro Stock made its official debut at the 1970 Winternationals, work had been going on behind the scenes before that as a group of NHRA’s top Super Stock racers — Buddy Martin, Bill Jenkins, Al Joniec, and Wally Booth to name a few — had been drawing up a proposal for a heads-up eliminator with NHRA – initially to be known as Super Stock before NHRA came up with the Pro Stock name — outlining their thoughts and dreams for the class in a 27-point proposal.

While all of that was going on, the AHRA was running Ultra Stock, a very popular heads-up Super Stock-like class, and Nichols was part of that group, driving a ZL1 Camaro for Dickie Harrell.

“At that particular time, the class was a reflection of the war that was going on between Chevrolet and Ford and Chrysler competing for the muscle-car business,” she said. “This particular class was intended to be from the beginning was a manufacturer’s off-the-[showroom]-floor car that was competing. For all intents and purposes, it was gasoline and carburetors and a real car that we would then lighten and race and then run heads-up, unlike NHRA Super Stock, which was handicapped, and it was wildly popular.” 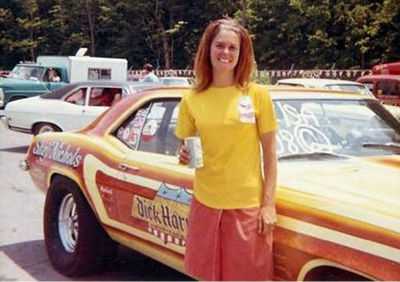 Nichols says that she and a group of Chevy, Ford, and Chrysler racers that would later be known as the Texas Pro Stock Association also would run at NHRA tracks under varying weight breaks to give NHRA data.

“We started experimenting with things differing sets of parameters. ‘OK, this time, we're going to have this many pounds per cubic inch for this,’ and they were trying to figure out how to do it,” she said.

(When NHRA Pro Stock debuted in 1970, there were no weight breaks — those didn’t come until 1972 — but perhaps the data that Nichols and her fellow racers had accumulated aided that process.)

“When NHRA came out with licenses for Pro Stock drivers, those of us who were already [running a Pro Stock-like class in AHRA] were grandfathered in,” she explained. “During those earlier years, often those of us who still ran AHRA, when we would come to an NHRA event [with those cars], we got shuffled off into C/Gas class, though sometimes that line looked a lot like any other Pro Stock line would look. That was just kind of the logistics and the politics of the situation.” 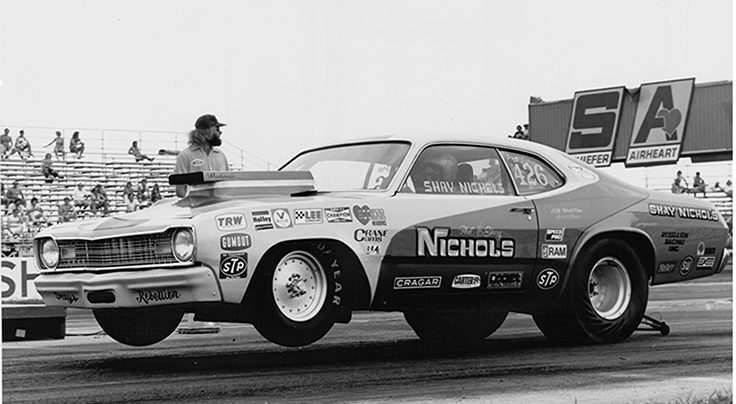 Nichols raced Pro Stock through the 1977 season and was the only female in the class after Shahan bowed out at the end of 1971. She finished second in Division 4 Pro Stock points (behind only Shelby Jester) in 1976, but after her second accident in three years — a terrifying 155-mph accident in May 1976 in Amarillo, Texas — she knew it was time to move on.

“There are so many other things I want to do,” she told Motor Racing News in July 1976. “I’ve accomplished all of these fantastic things, and I’m ready to do something else. I’ve been knocked around in two cars, and the doctor said my back and shoulders probably can’t take any more.”

Leaving Pro Stock behind was not without its sadness because there was so much she enjoyed about competing in the class, especially the people like fellow Mopar racers Ronnie Sox, Dick Landy, Herb McCandless, and many others.

“It was a highly competitive environment, where I was very well respected and very capable of competing,” she said. “What I really liked the most about it was the group of people that I raced with during the time. The people that came into drag racing that ended up building Pro Stock were just great people, and we were doing things that were inventive. We were trying to figure out what to do next, how to do things. There was a whole camaraderie and a sense of belonging to something that was being birthed and doing things that most people thought were impossible to do.”

The next chapters of her life are worthy of books unto themselves, a mega-sized version of the old “Where Are They Now?" column we used to run in National Dragster. And for Shay, where she is now and where she’s been, almost defies descriptions.

“When I quit doing that, I didn't quit living,” she told me. “I just like to stay busy, I guess. Always doing things. Interesting things, I suppose.” 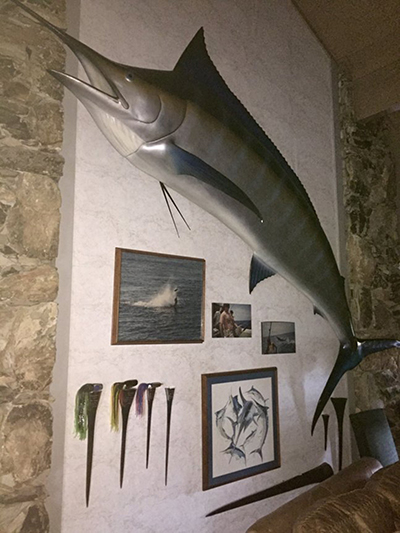 “After I quit racing, I ran a 38-foot Egg Harbor sports fishermen for big-game fishing, and I chased billfish all over, everywhere,” she said. “I later moved to Hawaii with that boat and, in addition to being licensed to fish 100 miles off the Texas coast, I was now licensed to fish in all Hawaiian waters. I did marlin fishing about as seriously as I was doing drag racing. I just moved my serious application into something else. For 10 years, I traveled the circuit from Australia through Mexico and Texas and caught every species of billfish.

“In 1998, I assembled the first all-female crew for the Hawaiian International Billfish Tournament. It took two years to put it together because of the rules involved. It's an invitational tournament with teams from all over the world. I was captain, and then I had a female wire woman and a female gaffer, and then all the anglers were female. 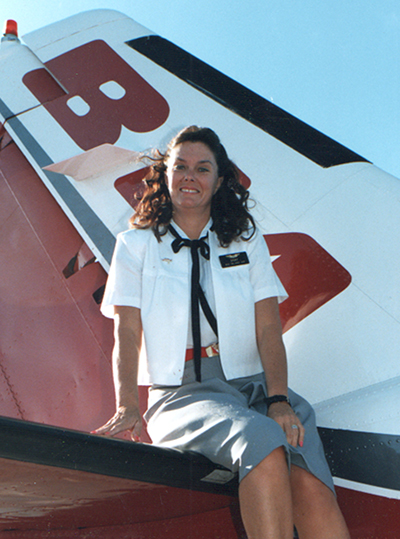 “During the time I was in Hawaii, I decided to become a pilot. I went to the airport just like anybody else does the first time, and said, ‘Gee, mister, I might like to learn to do this,’ and they take you out and give you a little introductory flight. I got hooked really hard and fast on that, and within a very short period, I earned my ratings and ended up being president and chief training officer for Big Island Air in Kona, Hawaii. We put the first and, still today, only jet aircraft on 135 charter flights in Hawaii. I received a commendation from the Hawaii House of Representatives for the supreme effort and successful endeavor.

“I have an airline transport pilot certificate and multi-engine instrument certificate and have one of the very few captain authorizations for a person to fly a Citation 2 jet as a single pilot. Jet airplanes are built for a crew with a copilot, but I'm able to do it by myself without a crew.

“I got into helicopters when I started flying aerobatics. My husband really wasn't into [aerobatics], so we thought getting a helicopter might be fun. We found a Bell 47, and we started doing that. The first checkout I did was for a commercial certificate, not even a private certificate. That's just the way things have been for me.” 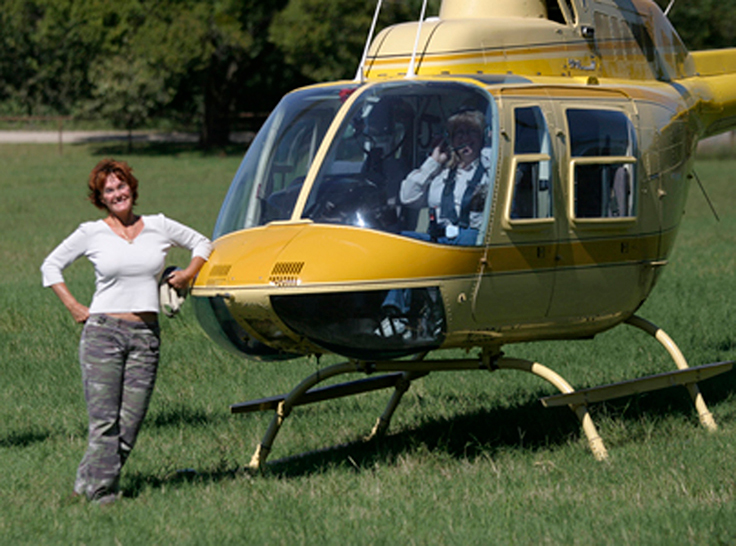 “I love flying helicopters. When we moved back to Texas, we flew from our ranch into Dallas for work to do with the airplane and miss the traffic, or just to run around and look at all the fishing places or take people to see different areas or do things like count cows for people. That was just pure fun.” 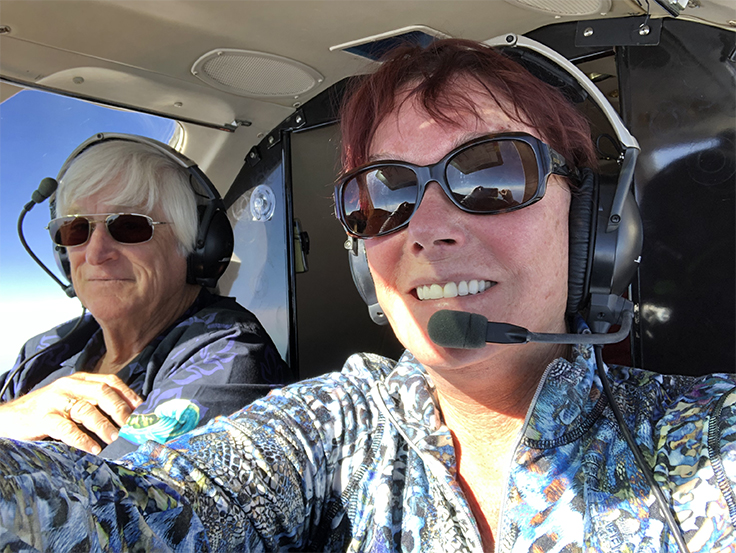 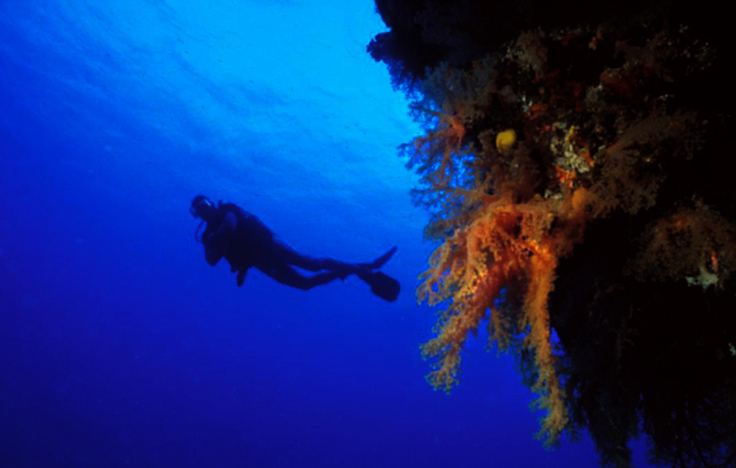 “I also worked as a commercial scuba diver, doing photography that won some international awards for my work. I really enjoyed my diving portion. I still do that. I really enjoy being in the ocean and around people that do things." 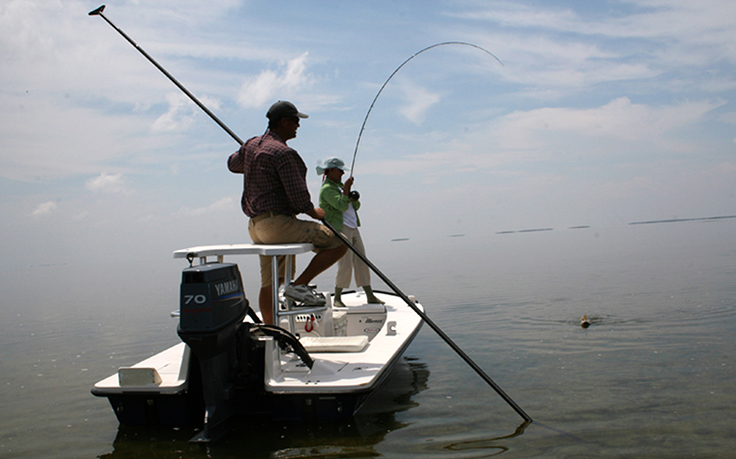 "I'm not very socially good at sitting around and talking about knitting. I'm a fly fisherman, and my friends are fly-fishing people or plane people or car people or boat people. That's where my friends are.” 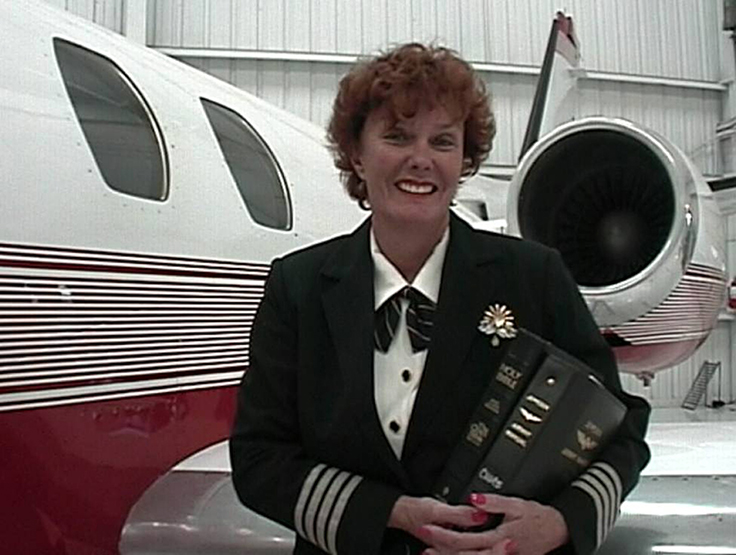 “I sold the piston part of the [airline] company and moved to Dallas, bringing the Citation Jet and two instrumental company employees with me under contract by AMR [parent company of American Airlines] and were instrumental in helping that organization form and operate their entry into the fractional ownership department of American Airlines. Today I am flight operations manager of a private company called Mixed Wing and am an Airline Transport Certified Pilot [ATP] with a CE500 type rating.” 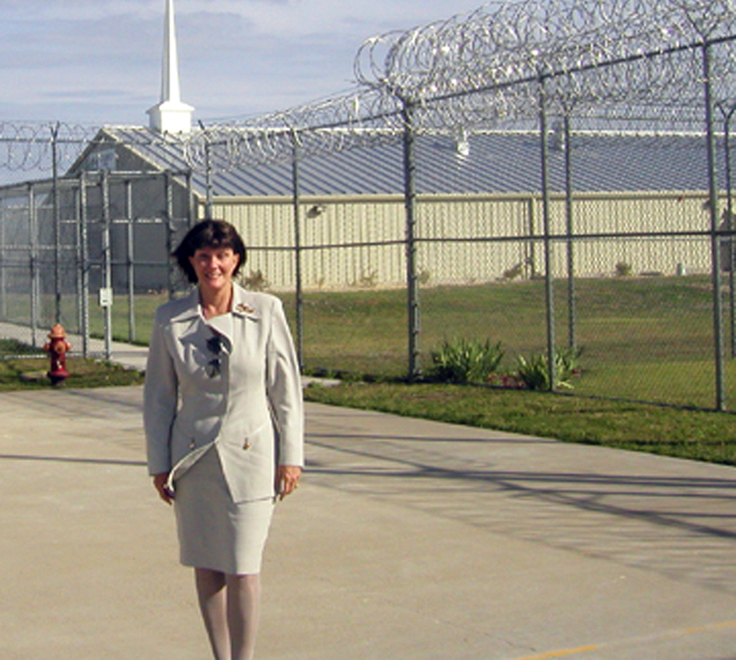 “I have a doctorate in Christian counseling and worked for 12 years inside a prison as a licensed chaplain, doing whatever the [lead] chaplain had me do. I had the keys to the whole place, to go anywhere my assignment took me. It may be that I talked to a woman whose son got killed and [prison officials were] not letting her go to the funeral or I might be sitting and talking to somebody who just tried to kill themselves and were trying to deal with what’s next. I really think the Lord led me into that. It's not something for just everybody to do. I think you really have to have a calling to do it. I do a lot of work in my community and with my church. I'm very active in my church. 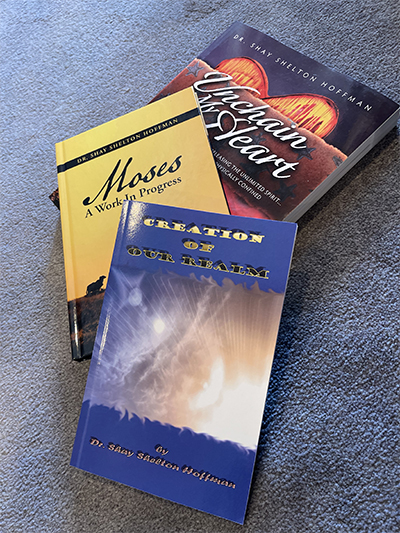 “I've written three books. I guess the major one is called Unchain My Heart, a group of nine sections of 40 days each for a person to be able to learn to deal with their thoughts and their emotions, and then be able to translate that into development which brings about the freedom. Creation of Our Realm is the Genesis creation account through the eyes of quantum physics and quantum mechanics, and Moses, A Work In Progress is an allegorical story about Moses’ 40 years in the desert after being run out of Egypt and how he had to go through periods of time that are very similar to things that we all are very likely to get stuck in, where we think, ‘Gosh, that part of my life is over; what am I going to do?’; the whole premise is that he was a work in progress.”

That seems a very apt metaphor for her life, as she has grown and experimented and learned, and at age 79, she doesn’t seem like she’s much ready to slow down. 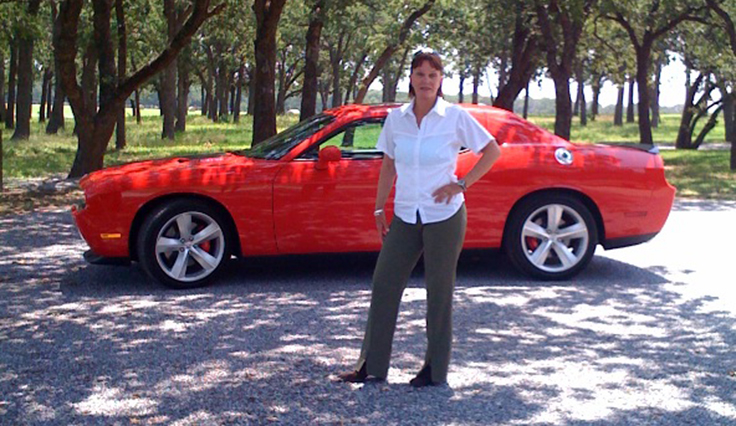 (As you can see, she's still a die-hard Mopar fan.)

As she forewarned me as we tried to set up an interview,  “I am in very good health and extremely active, but it may be hard to catch me.”

I don’t think I ever could. Nor could most people. Thanks for sharing your story, Shay.