Cory Mac is back ... in a Funny Car? Veteran will run nostalgia car in Vegas exhibition

NHRA Top Fuel veteran and fan-favorite Cory McClenathan will be back on the track at the NHRA Nevada Nationals, but this time in a Funny Car as he takes part in the Red Line Oil-sponsored Legends Nitro Funny Car exhibition at The Strip at Las Vegas Motor Speedway.
26 Oct 2022
Phil Burgess, NHRA National Dragster Editor
News

Fourteen years ago, Cory McClenathan stood in the winner’s circle at The Strip at Las Vegas Motor Speedway after winning the Top Fuel title at the 2008 SummitRacing.com NHRA Nationals, and the veteran Southern California competitor hopes to be back there this weekend, albeit in a different class and totally different vehicle.

McClenathan, who won 34 times in NHRA’s Top Fuel class and four times in Top Alcohol Dragster, will be behind the wheel of a Funny Car instead of a dragster this time as he competes in Rick Akers’ Trans Am in the Red Line Oil-sponsored Legends Nitro Funny Car exhibition that features 1979-or-earlier nitro-burning Nostalgia Funny Cars. 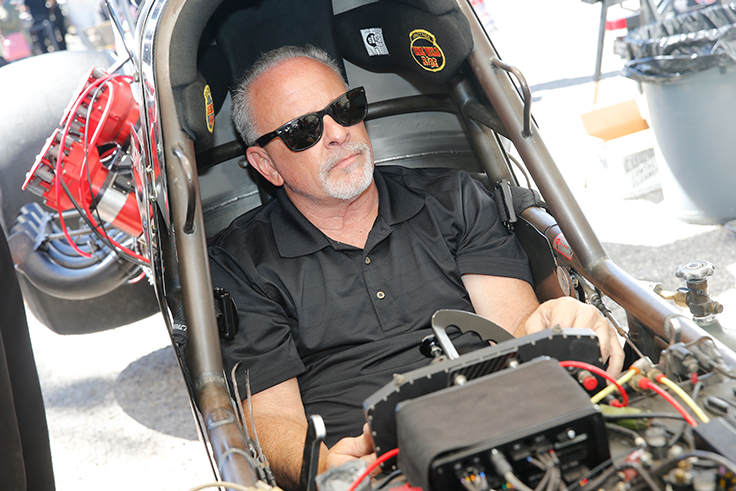 McClenathan, who vied for Top Fuel championships for more than two decades, last ran in Top Fuel at the 2020 NHRA U.S. Nationals but only as an occasional competitor as he sought backing and partnerships, but this year, he turned to a new challenge in the popular Nostalgia Funny Car class that is a mainstay of the NHRA Hot Rod Heritage Racing Series.

After so many years in front of the supercharged nitromethane-burning engine, he’s finding it an odd sensation to have it in his lap, especially in a shorter-wheelbase car to boot.

“When I started trying to drive a nostalgia car, I thought, 'Man, I'll be able to get a handle on this pretty quick,' and it's definitely been a struggle to learn how to drive it,” said McClenathan, who made his debut earlier this year in Bakersfield at the famed March Meet. “They're not what you think they are."

Although the car has run as quick as 5.78, shutting off early at 1,000 feet, it’s been some tough sledding for the fan favorite.

“I got a lot of test runs, got my license, and everything was good, then we started wearing some parts, and [crew chief] Glenn Mikres started throwing some more power at it, and we found some weak links and fixed those,” he said. “And now we’ve got a good solid car. It's got all the ‘big-show’ parts and some of DSR’s innards in it, and now it's running good and not hurting things.

“We think we really have something, and I'm excited because I'm not only learning to drive a Funny Car, but I'm excited to learn them all and start putting down some really good passes in Vegas. The opportunity’s there.”

Despite having made thousands of passes in more than 500 national event outings, McClenathan, who had to withdraw from the Texas NHRA FallNations due to since-alleviated medical issues, admits to being a little anxious heading to Las Vegas.

“With a Funny Car, you don't know what's coming, and it happens so quickly, and you got to drive it from the time you hit the gas,” he said. “The characteristics of it puts me in a position where I can't pedal it like I used to a dragster, so I needed to depend more on short shifting if I'm in trouble and then do it that way. We extended the steering wheel and got it to where I can really try and manhandle the car but, man, if I ever go back into a dragster, I'm really gonna have to slow my steering down.

“I talked to a bunch of guys like Cruz Pedregon and Jack Beckman, and they flat told me that this is a harder car to drive than the ‘big-show ‘car because it struggles where a big-show car has so much power." 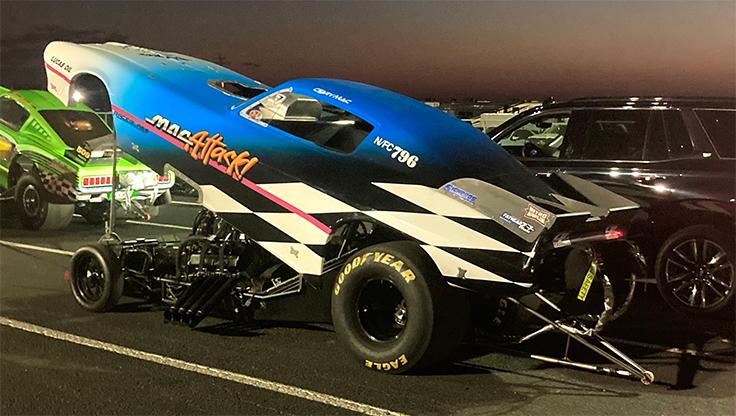 Longtime fans will instantly recognize the familiar blue with checkers paint scheme and the Mac Attack name that McClenathan flew in the early 1990s in Top Fuel.

“Bringing it back to Mac Attack scheme just seemed like the right thing to do,” he said. “It's an iconic design from Kenny Youngblood back in the day that goes with this car. I can’t say enough about the team, from Rick Akers, who owns the car, to Greg Landwehr, who helps fund it and does the clutch, to Glenn Mikres and the crew."

Sponsorship help comes from a variety of sources, including Lucas Oil, Fat Headz Sunglasses, and Cascade Automotive, as well as Akers’ own Akers Demo and Construction and McClenathan’s RaceGlass companies, and he’s looking forward to the exposure that they’ll all get in Las Vegas. 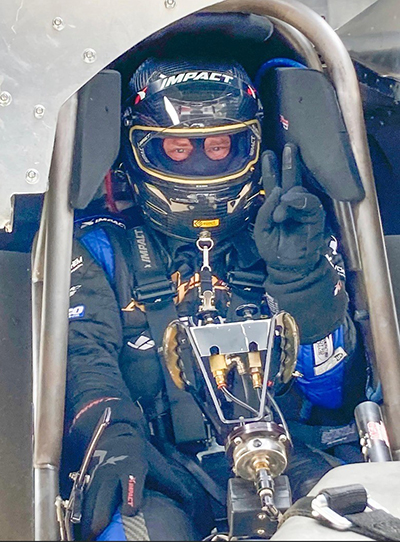 “This is a good class to have at the national event,” he said. “It’s a nitro car, and we get to run in qualifying behind Funny Car or Top Fuel [whatever's running first on those days]. It just gives the spectators something else to look at from the old days.

“It's like stepping back in time for all of us. We’ve got two motors, and we have to be careful with them. These guys all kind run of on a shoestring budget, but I love being back at the track with the folks that I started with, like Pat Austin and Bucky Austin, who’ve got their kids in the car, so, obviously, I'm the old guy of the bunch, but I've been there before. And what I don't know on the racetrack, I certainly know on the starting line, so it'll make it interesting. I think the fans and NHRA are going to be really happy with what we have to bring to the table.

“I'm looking so much forward to Vegas because I think I'll get right back in my driving mode of ‘Let's get this done,’ and this is where I belong. Then my next thing will be I wanted to drive a ‘big-show’ Funny Car and get my license. Now that I'm back in this thing, I'm determined to get my Funny Car license and go out and run some races.”