It’s been three years since Deric Kramer has been able to race Pro Stock at his home track, Bandimere Speedway, but the good news is Pro Stock returns to Thunder Mountain for the first time since 2019 at this weekend’s Dodge Power Brokers NHRA Mile-High Nationals in Denver.
13 Jul 2022
Posted by NHRA.com staff
Feature

It’s been three years since Deric Kramer has been able to race Pro Stock at his home track, Bandimere Speedway, but the good news is Pro Stock returns to Thunder Mountain for the first time since 2019 as the NHRA Camping World Drag Racing Series kicks off the famed three-race Western Swing at this weekend’s 42nd annual Dodge Power Brokers NHRA Mile-High Nationals in Denver.

That has Kramer plenty excited, as the category didn’t race at his home track last year, and a dream weekend for the area native would be his first Pro Stock win at Bandimere Speedway. Coming off his first semifinal appearance of the year at the most recent race in Norwalk in his Get Biofuel Chevrolet Camaro – as well as a solid test session on the mountain last week – Kramer is thrilled to be back racing in Denver, and with a car capable of winning.

“It’s the first time in three years I’m racing just down the street from where I live, so I can’t wait,” Kramer said. “We got to test at the track last week, and I’m just extremely excited. I started racing in Pro Stock here at Bandimere in 2012, and it’s always been a special place to me. I learned how to drive a Pro Stock car at altitude, and just remembering what that’s like, this weekend is going to be fun for me.”

Steve Torrence (Top Fuel), Matt Hagan (Funny Car), and Matt Smith (Pro Stock Motorcycle) won the 2021 event, and this year’s race will be broadcast on both the FOX broadcast network and FOX Sports 1 (FS1), including live eliminations coverage starting at 4 p.m. ET on Sunday, July 17 on FOX. It is the ninth of 19 races during the 2022 Pro Stock season, and Kramer hopes the Norwalk result is the start of a strong string as the Countdown to the Championship playoffs loom. 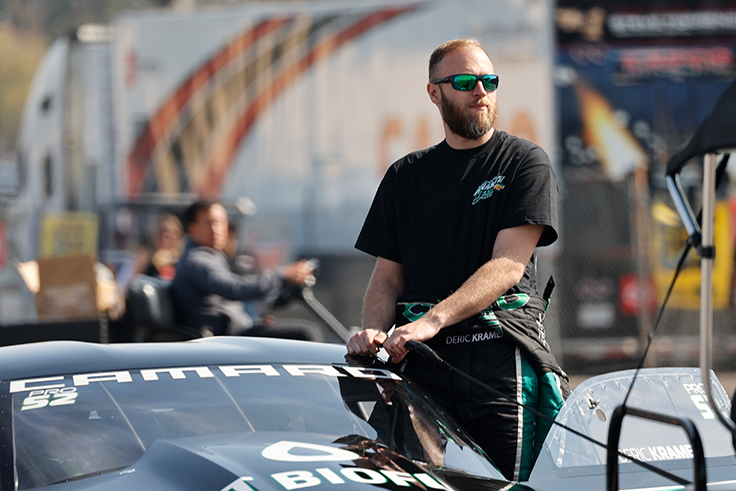 He’s been solid thus far, qualifying in the top five at six of the first eight Pro Stock races, but it’s a nod to just how competitive the class is that Kramer hasn’t won or been to a final round yet. But he continues to push forward, knowing that getting hot on the Western Swing, which also includes stops in Sonoma and Seattle, could be perfect timing for his championship push.

“Testing went well, and things felt great in the car,” said Kramer, who is currently eighth in points. “We tried a couple of things we thought might help in Denver, and I guess we’ll find out when everyone else shows up. We come out there with the expectation to win, but it’s so competitive in our class right now. It’s the most intense competition ever. If you can finish the Western Swing strong going into the playoffs, that’s the best way you can do it. But you can’t just stumble right now and then expect to have a great Countdown.”

Of course, Denver presents some of the biggest challenges on the NHRA tour, as massive changes are needed for each car while racing at an elevation of nearly 6,000 feet. With Pro Stock not racing at Bandimere Speedway since 2019, it will be the first appearance for several young star drivers, including Dallas Glenn, Kyle Koretsky, Aaron Stanfield, Mason McGaha, rookie Camrie Caruso, and Troy Coughlin Jr.

Veterans like points leader Erica Enders, who has an incredible five wins in 2022, defending world champ Greg Anderson, who has 99 career wins, Chris McGaha, and Matt Hartford will also be on hand, posing plenty of challenges for Kramer. But the biggest one in Denver is usually just trying to solve Thunder Mountain.

On Friday, Kramer made a competitive run with a 6.973 but that was only good for the No. 8 spot. On the plus side, he's less than three hundredths of a second off the pace set by low qualifier Aaron Stanfield. Kramer also has two runs on Saturday that he can use to refine his set-up ahead of Sunday's final eliminations.