The opening race of the NHRA Camping World Drag Racing Series Countdown to the Championship takes place at this weekend’s 36th annual Mopar Express Lane NHRA Nationals presented by Pennzoil at Maple Grove Raceway, and Ron Capps couldn’t be in a better place. The Funny Car veteran has the points lead heading into the first of seven playoff races, and he will look to get off to a strong start as he aims for his second career world championship.

His regular season was built on consistency in his NAPA Auto Parts Dodge Charger SRT Hellcat, turning in a brilliant first 13 races that included one victory and four appearances in the final round, as well as qualifying No. 1 at four different events. But it’s a tight field in the loaded Funny Car class, so Capps knows this is not the time to relax. Coming off a final round at the Dodge//SRT NHRA U.S. Nationals in Indy, Capps wants to keep things pushing forward at the same pace that led to a fantastic regular season.

“Going to Maple Grove in just a few days to start the Countdown and having a race car as good as our NAPA car is right now with the consistency and performance is exciting,” Capps said. “I’m really pumped to get to Maple Grove to start the playoffs. We won the championship in 2016 without winning a race in the Countdown, but we were, by far, the most consistent car. We put the pressure on people, and that’s what you have to do.”

All the stars in Top Fuel, Funny Car, Pro Stock, and Pro Stock Motorcycle will look to start the playoffs in impressive fashion, with the beautiful hills of the beautiful Pennsylvania countryside providing a picturesque backdrop. The event, which is the 14th of 20 races during the 2021 NHRA season, will be televised on FOX Sports 1 (FS1), including final eliminations on Sunday, Sept. 12 at 2 p.m. (ET), and Capps will look to keep rolling.

Capps has started from the No. 1 position in the Countdown to the Championship on two different occasions, including his championship-winning year in 2016. But starting in first doesn’t guarantee a thing, especially with Funny Car as tight as it has ever been. The points lead changed hands in each of the past five races, with Capps, defending world champ Matt Hagan, Bob Tasca III, and John Force all holding it at some point in the past month. Capps is back on top for the second time in four races, jumping all the way from fifth to first thanks to his runner-up in Indy. That makes it obvious things will come down to the wire in Funny Car, but Capps is in an ideal position heading to Maple Grove Raceway, even though he’ll also have to deal with the likes of J.R. Todd, Robert Hight, Alexis DeJoria, Tim Wilkerson, and Cruz Pedregon. It’s the first goal checked off and a great indicator to how the car has been performing at a key time.

“We have these small goals we set, and one of those was to be the regular-season points leader,” said Capps, who has 67 career wins and 129 final-round appearances. “Coming into Indy, there were a lot of drivers with the chance to grab that top spot. It was pretty bunched up and exciting for the fans. Things fell our way, and we have a great team with [crew chiefs] John Medlen and Guido [Dean Antonelli]. They’re firing on all cylinders, and it’s really great to drive this NAPA race car." 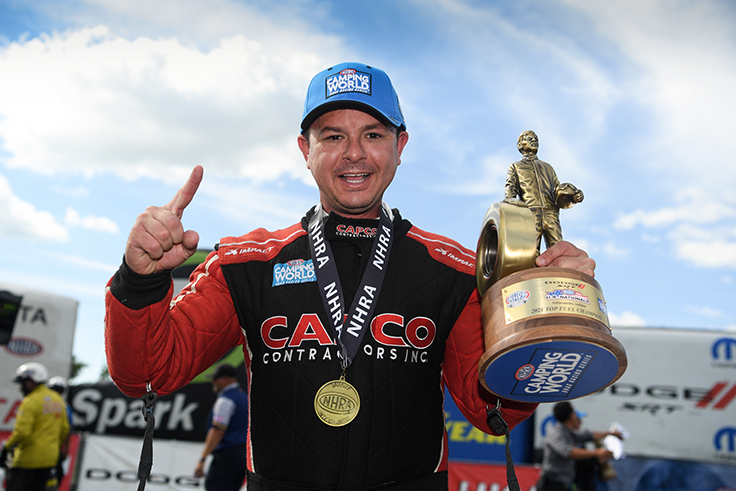 Steve Torrence continues to be a dominant force atop the Top Fuel ranks, carrying the points lead into Maple Grove Raceway as he seeks his fourth straight world title. If anything, Torrence has been even more incredible in 2021, winning eight times in 13 regular-season races, including on Sunday at the U.S. Nationals. He’s been several steps of everyone this year in his 11,000-hp Capco Contractors dragster, but the three-time world champ knows he has to prove himself again in the playoffs.

With the points reset, Brittany Force will be just 20 points back of Torrence when they arrive at Maple Grove Raceway. Torrence will also have to deal with a number of talented championship contenders, including Leah Pruett, Antron Brown, Shawn Langdon, Mike Salinas, Justin Ashley, Clay Millican, Billy Torrence, and Doug Kalitta, but the Texan isn’t altering his approach heading into the Countdown to the Championship. He’s confident with what his team has built, and the results certainly speak for themselves.

“It won’t change the way we do things,” Torrence said of the adjustment. “We go out and try to win every race. That’s what we’ve always done, and I can’t wait to get started again. When you have these Capco boys behind you, you know you’re gonna have a car that can win every week, and the challenge is for me not to mess it up. We’re going to approach [the Countdown] one round at a time and one race at a time, and I’m going to lean on my guys, and they’re going to lean on me, and we’ll see what we can do.”