NHRA and Hot Wheels: Together Again

Earlier this week, NHRA announced a partnership with Mattel’s Hot Wheels brand to bring NHRA-branded drag racing diecast cars to the mass market, the continuation of a relationship that began in 1970. Here's a look back at how it all got started.
05 Mar 2021
Phil Burgess, NHRA National Dragster Editor
DRAGSTER Insider

In case you missed it earlier this week, NHRA announced a partnership with Mattel’s Hot Wheels brand to bring NHRA-branded drag racing diecast cars to the mass market, a release that certainly sent my heart swooning. It’s been more than 50 years since Hot Wheels burst into the NHRA Drag Racing world with the groundbreaking sponsorship of the Funny Cars and Top Fuelers of Tom McEwen and Don Prudhomme, a deal that is widely credited with opening the door to major non-automotive sponsorships that we enjoy today.

Although that initial Hot Wheels sponsorship with the Wildlife Racing partners lasted only three years (1970-72), Mattel has continued to make drag racing-themed products over the years and to salute “the Mongoose” and “the Snake” on notable anniversaries, but the NHRA deal is a great step. 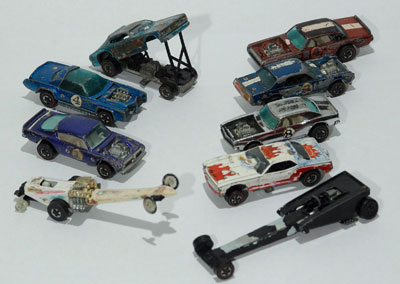 To many of us, Hot Wheels provided an entry point to drag racing, so I thought I’d look back at the deal and some past columns that I’ve posted about Hot Wheels. They certainly opened the door for me, as I’ve explained many times, but most passionately in my ode to small-scale cars, firecrackers, and lighter fluid, Growing Up Boy, that I wrote way back in the infancy of this column in 2008. If you missed it, I’m sure it will spark many similar memories of your childhood adventures and experiments and, again, forgive me for the damage teenage Phil wrought upon his Hot Wheels cars that individually would be worth hundreds of dollars today.

My discovery of Hot Wheels led to my infatuation with drag racing, which led to my employment at NHRA, which led to my typing these very words, a relationship that I also discussed in A Christmas Letter To My Younger Self.

Before I get too far into all of that, for those unfamiliar with the genesis of the sponsorship, the sponsorship was the brainchild of the ever-eager McEwen, who had already broken minor ground with small, non-automotive sponsorships from Tirend activity booster and Gold Spot breath freshener. He had three young sons who inspired him, a mother who worked as a secretary at Mattel, and an attorney stepfather whose clients included Mattel. Those connections opened the door to a meeting with Mattel Vice President Art Spear, who greenlighted the project.

In an interview with Prudhomme a few years ago, he said, “I’ll never forget the day he walked into my shop and said, ‘I’m going to the Mattel toy company and see if they want to sponsor us.’ I thought he was nuts. The balls he had — I was still a shy kid — and I thought they’d throw him out on his ear, but he had the balls to do it.” 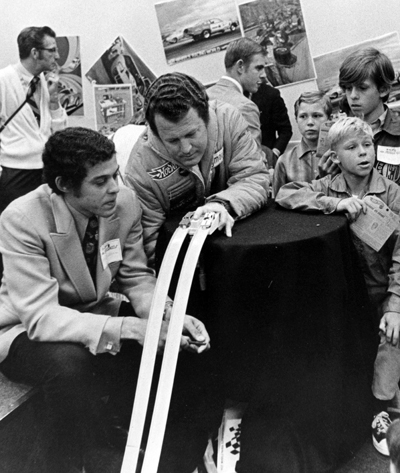 Prudhomme expounded upon that time in his recent autobiography, Don Prudhomme, My Life Beyond the 1320, quotes from which I have excerpted below.

“I can still remember the first time McEwen mentioned Mattel to me. I was hanging out at Keith Black’s. … I didn’t even know what he was talking about, I didn’t know about the toys, but he had kids, and they were into Hot Wheels.

“That vision, he had it. I never would have thought to go outside oil and cam companies to look for sponsorship. When McEwen came to me and asked me about it, I wasn't all that crazy about it because I already had a sponsor and it was Wynn's; plus, my immediate thought was, ‘What would Mattel want with a couple of drag racers?’ Mattel was Barbie dolls, and I didn’t think I needed another sponsor. I was doing fairly well, I was getting some good money from Wynn's and getting a little more from Plymouth. McEwen didn’t need me to get it though. He could see the future.

“Now, I’d had a few meetings before, so this wasn’t my first sponsorship pitch, but I still felt out of my league. Mattel wasn’t wheel or spark plug people who hung around the track and worked out of small shops, it was a big company, but McEwen was confident. We went over there, and it went really well. 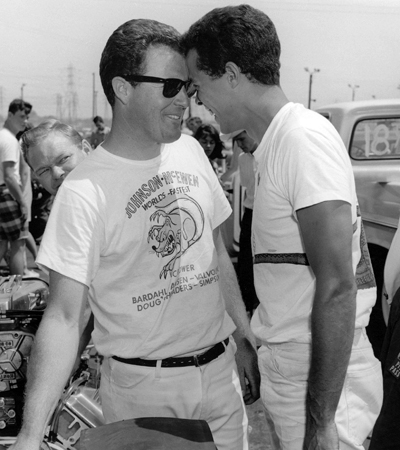 “They already had pictures of how they wanted the cars, and I was surprised to see renders showing full-body cars. I thought McEwen was talking about dragsters, but they wanted Funny Cars. That’s another example of McEwen being ahead of me in understanding something. Tom already had a Funny Car. He didn't run it that long, but he used to tow it around the country with us and do exhibition runs. He understood that the fans really liked Funny Cars.”

Prudhomme went on to explain that their existing relationships with Plymouth and Dodge — McEwen’s first Funny Car was a Barracuda, Prudhomme regularly got Hemi heads for his dragster, and Keith Black had relationships with both Dodge and Plymouth — led them to that marquee for the first Hot Wheels Funny Cars, which also blossomed into additional sponsorships.

“It could've been any cars, but we had the relationship with [Chrysler’s Dick] Maxwell,” Prudhomme wrote. “We could've went to Ford, but we went to Plymouth. They drew up these images once they knew what kind of cars we wanted. It was a Barracuda and a Duster. We took those drawings to Plymouth and showed them what Hot Wheels was going to do. And immediately, they wanted their name on the quarter panel of the cars because their name would be on all the little toy cars Hot Wheels made. Plymouth would be a part of that, and they paid us money and gave us cars to drive. 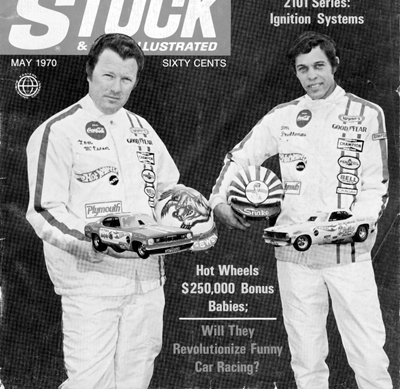 “The brilliance of that sponsorship was that everyone wanted to be on the race car, not because of the race car, but because they would get to be on the toy car.  We went to Coke, to Federal-Mogul, Cragar. All of them put their decal on the car, and they paid us money. Wynn's paid us, too. That's when we started Wildlife Racing, Inc. We had so much money coming in, we had to incorporate.”

Prudhomme remembers the sponsorships totaling to about $130,000, split between the two, which, despite having to add crew and more travel and haulers, still allowed them to buy the parts they needed and confirm that one could make a living at drag racing. (By way of contrast, McEwen told me long ago that he was getting about $1,000 per year each from Tirend and Gold Spot.)

Thanks to Prudhomme and CarTech for allowing me to lift that excerpt from the book. It’s just a small snippet from an incredible book [read my review here]. You can get yours direct from “the Snake” at snakeracinggear.com.

As mentioned previously, Hot Wheels cars have been the subject of several Dragster Insider columns, but here are some of my favorites, as well as some photos and video clips. 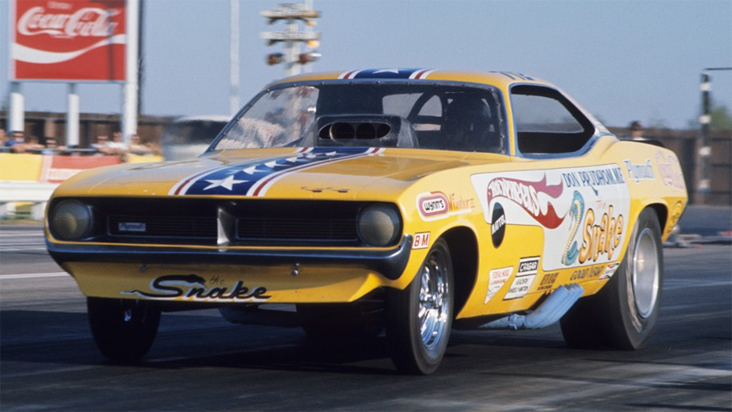 Those first Hot Wheels Funny Cars (the real thing, not the diecasts) were a work in progress throughout their first year. Prudhomme’s Barracuda specifically went through many iterations — roof spoilers, supercharger cutouts, lettering and decaling, and more — that we were able to retrace in this column thanks to the key eyes and inquisitive minds of renowned drag racing artist James Ibusuki and Dragster Insider contributor “Chicago Jon” Hoffman.

Mattel really got behind the promotion of its involvement with Prudhomme and McEwen, bringing film crews to racetracks to get footage of the actual cars and interviews with the duo to include in television commercials. Insider reader Jeff Mittendorf clued me into some of these old Hot Wheels commercials still floating around on YouTube, and I wrote this column to share them with you. You’ll get a real kick out of seeing them again (or for the first time). Note: In the 11 years since I posted that column, the “owner” of the videos has removed the ability to play some of them on the page, but links are provided to watch them directly on YouTube. 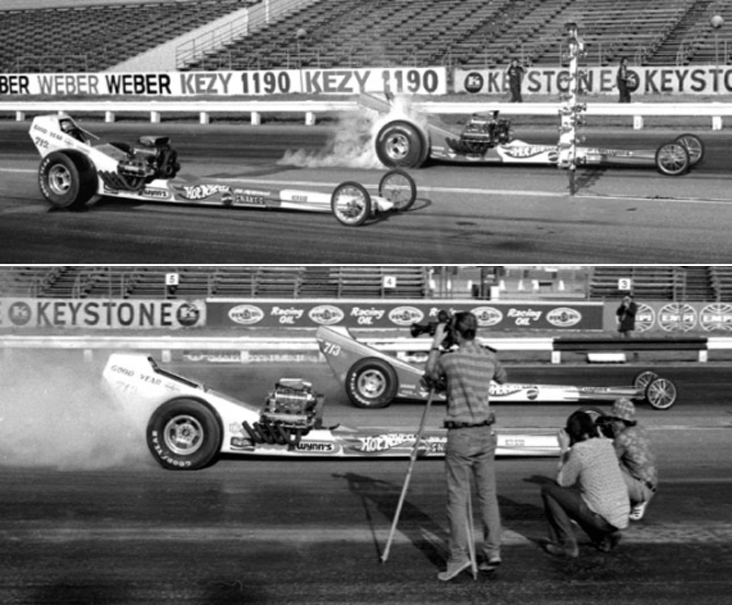 None of those commercials show the Wild Wheelies dragster set, but our old pal Steve Reyes was on hand at Orange County Int’l Raceway for the filming of one of the Mattel commercials with their slab-sided, front-engine machines. Now, the first thing that any hard-core drag fan — especially any of us who had the honor of actually going to OCIR — will pick out is that the cars are headed the wrong way on the track, and that they're also doing burnouts back to the starting line from not all that far up the track. What's up with that?

"Lighting problems," explained Reyes, "so, heck, let's run them the wrong way. They placed the cars going the wrong way out past the Tree and had Prudhomme and McEwen smoke the tires. I thought they were going to crash through the back fence behind the starting line. What a Chinese fire drill."

A few weeks after I posted that column of commercials, Mittendorf shared with me his extensive collection of vintage Hot Wheels memorabilia, including (of course) cars and promotional materials. There are some truly cool cars in there that I wish I owned.

Not a Dragster Insider column, but this cool YouTube video shows some close-up look at those early Hot Wheels Funny Cars and explains why some of them are rarer than others.

Finally, let me end with this. Famed Hot Wheels designer Larry Wood shared a short story of those early Hot Wheels days at the Celebration of Life after McEwen’s passing in 2018 that really sums up this whole column.

“Back in the day, when I was the only guy there, these two clowns come in with this proposal to make a racing team out of Hot Wheels,” he said, his voice quivering. “I have to tell ya — drag racing, Hot Wheels, and the world would never be the same. Thanks, Tom.”