Jason Rupert makes Winternationals debut, with a little help from his friends

The Rupert name was a familiar presence in Southern California nitro racing in the 1970s with Frank Rupert driving  Top Fuelers and then Funny Cars with partner Richard Bays, and now his son, Jason, has made his official Winternationals debut in the class with his own car.

And now in Pomona, at the most famous of West Coast dragstrips, they’ve got another pair of aces in their corner in world champion nitro crew chief Rahn Tobler and veteran crew chief and “fixer” Johnny West, who are heling tune the car and get the team on solid footing. 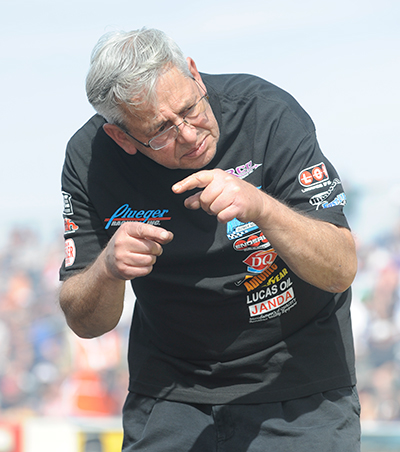 Rupert purchased the car, equipment, and trailer of the late Steve Plueger, and originally was befriended in the transition process by rising tuning star Eric Lane, who helped set up Rupert’s car with a five-disc clutch combination similar to what he was used to while working under Tobler at Don Schumacher Racing and on Bob Tasca III’s car when he transitioned there. Lane’s tragic death last October left a personal and mechanical void.

“Steve was really the one who got me going in this direction a few years ago,” Rupert acknowledged. “At that time, some of the Funny Car fields were a little light, so I started thinking ‘I'm not getting any younger. If I'm gonna do this, I better do it now,’ so we started putting it together and Eric was so instrumental in getting us going. I feel pretty comfortable with how our Nostalgia car ran, but these cars are different with the computers and the ignition and timing.

“After Eric passed away, I reached out to Johnny to help keep us going, but COVID was a real setback for us, because I’m self-employed and trying to run my business and build a Funny Car was a real challenge, and Brad had to help run the family business, too, so we got behind.”

The team had hoped to debut at last fall’s Las Vegas event with former Alcohol Funny car and current nitro Funny Car pilot Jonnie Lindberg at the wheel, but that start got bumped to the four-wide Las Vegas event this spring. They qualified the new car and Rupert earned his license the Monday after the event and made his driving debut last weekend in Sonoma.

“I felt like that Las Vegas event was a really successful weekend – we qualified, I got my license, and we didn't hurt a whole bunch of stuff,” said Rupert. “We went to Sonoma. and failed to qualify, but we ironed out some problems, I got a little bit of seat time, and everyone got acquainted with the car.”

Tobler had been introduced to Rupert by his protégé, Lane, and after retiring from Don Schumacher Racing and moving to Southern California, reached out to offer his assistance to the fledgling team. 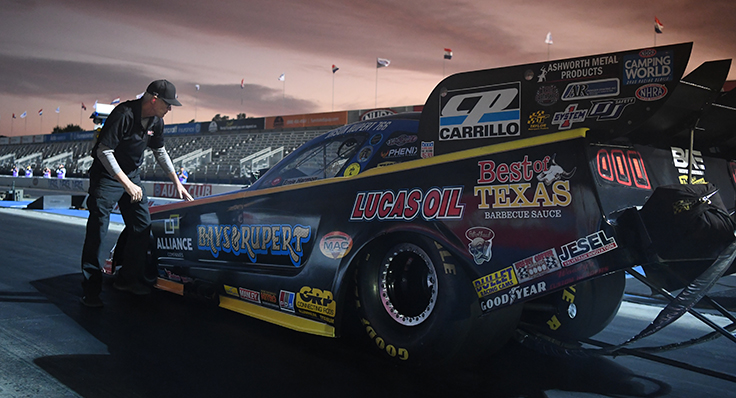 “Jason’s stuff is a clone of what I ran and he got all this general information from ‘hop Sing [Lane] before he passed away and Johnny came along and saved the day. As far as my perspective, I didn't come in here and change a bunch of stuff. We're both trying to learn all this together. And, you know, they have a pretty solid foundation. Horsepower has not been an issue, just figuring out the setup to get it down the track.”

That’s where Tobler’s expertise comes in.

“Do you remember how hot and miserable it was at the summer Indy races last year?” he asked, flipping through a pocket notebook filled with scribbled numbers and notes. “We won the third race there, so I'm looking back and the track temperature was 130 degrees and we ran 4.06, which I think was low for the round, and that’s what we’re looking at here. So we're, we're able to go back and look at some of those things that I have to try to apply.”

There are differences between the cars – Rupert’s was built by Plueger, Tobler’s out of the DSR fab shop – and no two chassis are ever the same, so it’s about adapting

“Even when I was together with J.C. [fellow DSR crew chief John Collins] and he and I were both had five-disc cars, I couldn't necessarily do all the same things that he did. You can rarely clone something and have it be identical. Plus it's not all about what we punch in all these buttons. It's the guy sticking in the clutch, it's the guy doing the blower, it's your guy building the heads that all those things factored into it.”

Which is where West’s expertise comes in, helping show these new teams how to service their cars, how to monitor parts life on crucial valvetrain parts, how to make things run smoother. He’s literally done that for dozens of teams over the years.

“Rob Wendland [Terry McMillen crew chief] called me last week because he's doing a similar thing working on a fuel altered deal back east, and he says, ‘Now I see what it is that you always try and focus on; you're a firefighter,’ and that's all I'm doing,” said West. “I just try to put out these little problems here and there, trying to catch things that can ruin a car and trying to get things to where they work in the right way."

Rupert’s goal is to qualify at this race, a tough task with the hot track, but he knows he’s got good help in his corner.

“Johnny and Rahn have been working together trying to figure out how to make this thing go down the track and, you know, it's a difficult thing, especially when the track temperature is so hot, and no one has run on the track for 18 months. If we qualify, I’d consider it a home run for us.”

After the Winternationals, the team will sit out until the final two events of the season, running the fall Las Vegas race and the year-ending Auto Club NHRA Finals.