It took an extra day to complete, but the Mopar Express Lane NHRA SpringNationals presented by Pennzoil was well worth the wait with a number of surprising and a few not-so-surprising outcomes.
25 May 2021
Kevin McKenna, NHRA National Dragster Senior Editor
News

It took an extra day to complete, but the Mopar Express Lane NHRA SpringNaitonals presented by Pennzoil was well worth the wait with a number of surprising and a few not-so-surprising outcomes. The NHRA Camping World Drag Racing Series visited Houston Raceway Park last October, but this event was quite different from the last one, although both produced their share of memorable moments.

Now five races into the 2021 season, here are five things we learned from the Houston event:

STEVE TORRENCE IS A BEAST 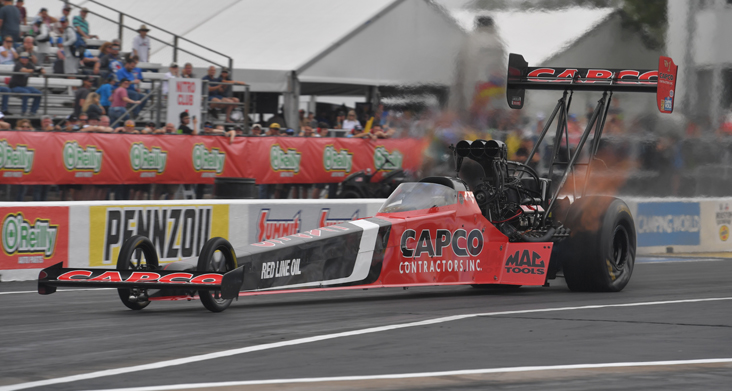 OK, so, we’ve known this for quite a while now, but with three wins in the first five events of the season, one begins to wonder what the Capco team might be capable of this year. When Torrence won 11 events and swept all six races during the Countdown to the Championship in 2018, it was fair to ask if that was as good as it gets. Now, we might be asking ourselves if he’s actually capable of exceeding those numbers.

Torrence was admittedly not at his best in Houston. In fact, he didn’t get to the finish line under power in his round-one win against Mitch King or his final-round race against Doug Kalitta, yet he managed to turn on four win lights on race day to earn his 43rd Professional victory.

Sandwiched in between Torrence’s off-pace runs in the first and final rounds were a pair of rock-solid 3.71 and 3.70 passes in the quarterfinal and semifinal round that proved that the Richard Hogan-tuned entry is still the best car in the class.

Considering all that he’s done the last three years, Torrence is used to winning, so one might expect him to be a bit jaded, but that hasn’t been the case, and it certainly wasn’t this weekend as he celebrated a long-overdue first win in Houston. As a proud Texan, Torrence values wins at his homestate tracks in Dallas and Houston as much or more than any other event on the tour.

ROBERT HIGHT IS OFFICIALLY BACK 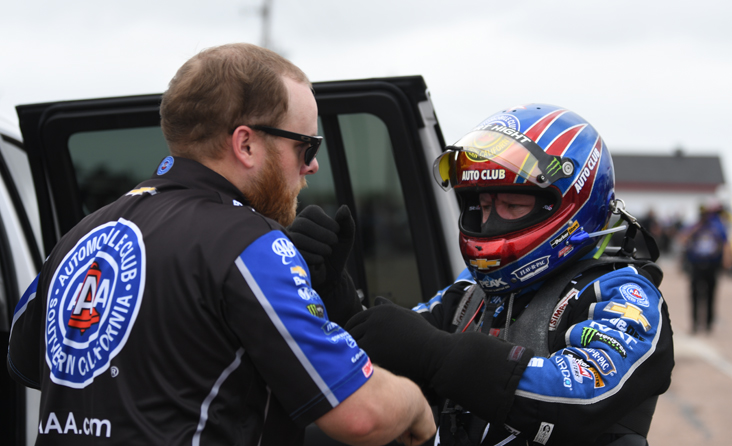 What are the odds that Funny Car teammates John Force and Robert Hight could sit out all but two events of the 2020 season, a full calendar year, and return to each find the winner’s circle within five races? Perhaps it’s not as big a longshot as some might think, but it still speaks to the talent level that the 17-time champ has surrounded himself with, and more importantly, the survivor mentality that has defined his career.

When Force elected to park his team during the pandemic, there were no guarantees that he’d effectively be able to put the band back together whenever, or if ever, he was able to return. And to be honest, the 2021 version of JFR is far different than the one that sat idle for 15 months.

Force went to the final in Atlanta and then returned to bag career win No. 152 at last week’s four-wide event in Charlotte. His Peak Camaro has arguably been the best car all season long, and during a Monday test session at zMax Dragway, the Peak crew helped Hight’s Auto Club team, which has struggled since a runner-up finish at the Gainesville season opener.

In Houston, Hight delivered four runs during Monday’s final eliminations between 3.90 and 3.93 to show that his Jimmy Prock-tuned Camaro is not just fast, but it’s amazingly consistent. And it’s fair to note that the format of the Houston event, where rain shortened qualifying to just one run for most of the Funny Car class and final eliminations were a day late, represents exactly the sort of adversity that tends to bring out the best in Hight’s team.

So far this season, we’ve had four different winners in the first five races with Bob Tasca III winning twice, and J.R. Todd, Force, and Hight have also earned victories. After sweeping every event in 2020, who’d have ever thought the DSR teammates Ron Capps and Matt Hagan would go winless into June? The bottom line is that the competition is only going to get tougher from this point forward.

ONLY THE STRONG SURVIVE IN PRO STOCK 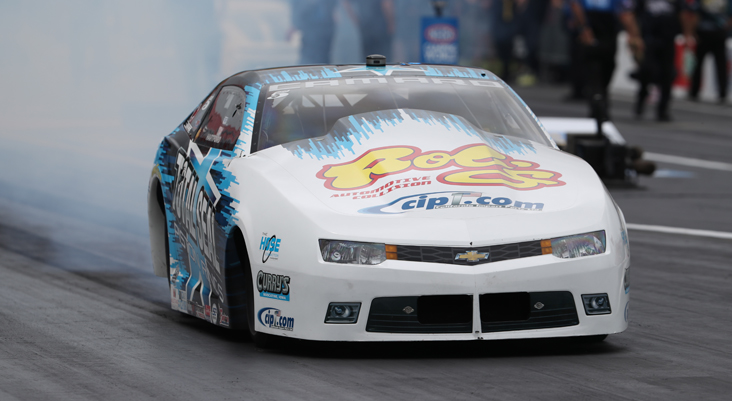 Pro Stock has always been known as a “driver’s class” but even during the so-called “glory days” when legends Bob Glidden, Lee Shepherd, and Warren Johnson were doing most of the winning, horsepower reigned supreme. Today, the best asset a Pro Stock team can have is a driver with a quick left foot because anything slower than a .040 light on race day almost guarantees an early exit.

Case in point is Matt Hartford, who scored his fourth career win in Houston but needed a big holeshot win in order to do it. Hartford did get by with a .038 light in his round-one win against Kenny Delco, but he knew he’d need to be significantly better in the quarterfinals when he faced four-time champion Erica Enders, and he delivered with a .013 to .020 advantage and a tiny holeshot win that featured a margin of victory of just .003-second at the stripe.

Stanfield followed with a .008 light in the semifinals but didn’t need it after 2020 Houston winner Aaron Stanfield shook the tires and shut off.

As for the remainder of the class, the amount of driving talent on display was incredible to watch. In the quarterfinal round, Greg Anderson missed the Tree with a .081 light, but everyone else; Hartford, Enders, Stanfield, runner-up Deric Kramer, Kyle Koretsky, Mason McGaha, and Charlotte winner Dallas Glenn, was .035 or quicker.

On his way to the final in his Get Bio Fuel Camaro, Kramer also did his share of nifty driving with holeshot wins against points leader Anderson and KB racing teammate Koretsky. When an entire field qualifies within a tenth of a second, and oftentimes much less, the bulk of Sunday’s races will be decided on the starting line.

RANDY MEYER KNOWS A THING OR TWO ABOUT TUNING 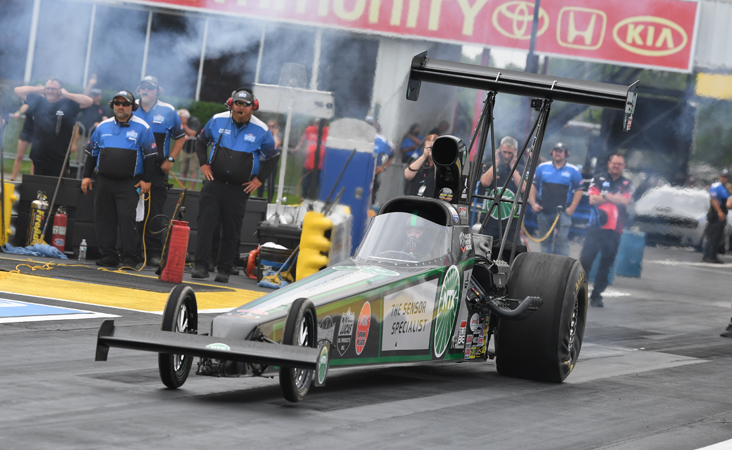 It doesn’t seem to matter who is in the driver’s seat, Randy Meyer-tuned entries represent the best of the best when it comes to injected nitro dragsters. Meyer’s daughter, Megan, won the last two championships before announcing her retirement this year, and now her younger sister, Rachel, has taken over, and the team hasn’t skipped a beat. When you add the achievements of teammate Julie Nataas, the Meyer team packs a very solid 1-2 punch.

In Houston, Nataas suffered a rare round-one loss, but Meyer went the distance to win her third national event of the season in four tries. Meyer ran that table in Houston when she set low e.t. and top speed of the meet at 5.143 and 282.01 mph, and she cleaned house on race day. Meyer never ran slower than 5.200 in her round-wins against championship rival Jackie Fricke, Matt Cummings, Jasmine Salinas, and final-round opponent Shawn Cowie.

In the interest of fair reporting, Cowie did leave first by more than a tenth of a second in the final and appeared to be headed to an easy win, but his supercharged dragster shook and slowed to a 5.632, allowing Meyer to cruise by for the win with a consistent 5.150. In order to win a championship, a driver has to learn to somehow win races they’re otherwise supposed to lose, and the Meyer team also appears to have that part down pat, although it doesn’t come into play often.

There are plenty of Top Alcohol Dragsters that routinely venture into the 5.1-second zone at more than 280 mph, but none of them do it as frequently as the Meyer team cars.

AARON STANFIELD IS NOT INVINCIBLE IN FACTORY STOCK 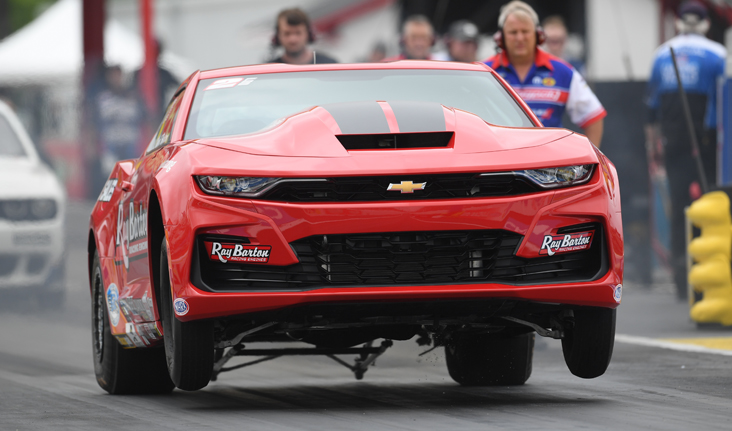 Before he lost to David Barton in Monday’s final round in Houston, anyone care to guess when Aaron Stanfield’s last loss in the Constant Aviation Factory Stock Showdown was? If you answered July 19, 2020, that would be correct. Stanfield lost to Chris Holbrook in the semifinals of the Lucas Oil NHRA Summernatonals held in Indianapolis, and since then, he’s won the last five events of the 2020 season to easily clinch the championship, and he came out swinging again with a season-opening win in Gainesville.

This week in Houston, Stanfield ran his winning streak to 28 straight rounds before David Barton finally got the best of him in the final round. Barton left first by a couple of hundredths of a second and never trailed with a 7.79 to 7.81 victory in a battle between two of the sport’s premier engine builders.

Barton’s win could not have come at a more perfect time since NHRA has just announced the formation of the Constant Aviation Bounty Program that rewards any driver who can beat the winner of the most recent event. Since Stanfield won in Gainesville, Barton became the first driver to cash in on the $1,000 bonus. Barton also finished a distant second to Stanfield in last year’s championship battle, but this year’s competition figures to be even more competitive. After two events, Stanfield leads Barton by 65 points, but the top five drivers are separated by just 90 points, and Bill Skillman, who had arguably the fastest car in Houston, was unable to stay around for Monday’s final eliminations.

The next event to feature the Constant Aviation Factory Stock class will be the Summit Racing Equipment Nationals in Norwalk, and this time, Barton will be the one with a price on his head.