You can’t keep a good man down, especially if he happens to compete in the E3 Spark Plugs NHRA Pro Mod Series. That certainly applies to Steve Matusek and Kris Thorne, who are both racing this weekend in Gainesville less than three weeks after destroying race cars in separate crashes at the Denso Spark Plugs NHRA U.S. Nationals.
25 Sep 2020
Kevin McKenna, NHRA National Dragster Senior Editor
News

You can’t keep a good man down, especially if he happens to compete in the E3 Spark Plugs NHRA Pro Mod Series. That certainly applies to Steve Matusek and Kris Thorne, who are both racing this weekend in Gainesville less than three weeks after destroying race cars in separate crashes at the Denso Spark Plugs NHRA U.S. Nationals. During an action-packed opening round, Thorne lost control of his turbocharged Camaro when the parachute was late to deploy. A few pairs later, Matusek heavily damaged his turbocharged entry after a run-in with the retaining wall. Undeterred, both drivers have arrived in Gainesville this week with new race cars.

Thorne, who is based a couple hours south of Gainesville in Titusville, Fla., is now driving a turbocharged Camaro that he bought from the ProLine team. It’s the same car that was previously raced by Jose Gonzales. Thorne, in his first year in the E3 Pro Mod series, is also using the same ProLine Engine combination that allowed him to set top speed at the first three events this season.

“Shortly after the crash I got a call from Eric [Dillard] at ProLine and he hooked me up with this car,” said Thorne. “I have a new car coming but it isn’t done yet. It takes about a year to get a new car once you order it so I wasn’t sure how long we might be out of action. The car that I crashed isn’t that bad; it can be fixed but it’s going to take a little while. The funny part is that I still had my old car up until two days before Indy. I sold it to a group in Russia and didn’t want to renege on that deal.

Thorne and his crew, led by crew chief Mike Rees, have worked almost non-stop to prepare the car for Gainesville. Although both cars are similar, there are always minor details that need to be addressed as far as engine swaps and driver comfort. Thorne is also well aware of the abbreviated schedule which allows for just two qualifying runs for Pro Mod racers.

After Friday's lone qualifying run, Matusek is No. 8 in the field with a 5.974 while Thorne did not get down the track under power and is not yet qualified.

“We’ve been non-stop on this car since we got it,” Thorne said. “It’s been rough but we’re here. Honestly, I’m not expecting a lot here but you never know. We’ve got the engine and transmission out of our old car so at least we’re running a combination that we know and that we’re comfortable with but there’s always going to be minor differences.” 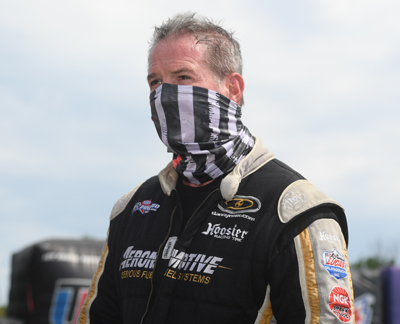 Matusek also has a new car in Gainesville and he went a step even further than Thorne by making the switch from a turbocharger to the new ProCharger engine combination. Matusek’s car was previously raced by Danny Rowe and later sold to Richard Freeman at Elite Performance. The car is flying the colors of Matusek’s new sponsor, Comisario Tequila.

“This is the Rick Jones [built] car that Danny ran in his final season. He sold it to Richard and it’s the same car that I drove earlier this year in Orlando at the Doorslammer race. After my crash at Indy, we sat down to come up with a plan and Richard just said, ‘Take that car’ and that was about it. I didn’t fit very well in Orlando but we’re putting in a new seat and making a few changes to make me more comfortable.”

The other big change for Matusek’s Camaro is the addition of the ProCharger, which represents a big change from the turbocharged cars he’s used to driving. According to Matusek, the change should make things simpler.

“It’s just like driving a Super Gas car,” he joked. “Seriously, with the turbo car the [staging process] is pretty complicated but with the ProCharger you just roll it in and go. We picked this car up from Justin [Elkes] at Modern Racing tested with it last week and it ran pretty well. I had to work so we let Tony Wilson drive it and we were pretty impressed with the results.

“I’m pretty excited to see what we can do,” Matusek said. “If you look at the ProCharger, there is a lot of potential there. We might struggle a bit this weekend because everything is so new but I like the direction we’re headed.”