We go one-on-one with Jimmy Daniels, the man whose SS/AH ’68 Dodge Dart has won the Dodge NHRA Hemi Challenge for the last four years in a row—he’s the one the competition is coming gunning for this year.
28 Aug 2020
David Kennedy
Feature

Where did this ’68 Dodge Dart come from?

We purchased the car from Ray and David Barton, at Ray Barton Race Engines, but prior to that, they got it from a fellow named Tom Parham. Tom raced the car with Ray and David, and Ray purchased the car after a period of time. The car set both the A/Automatic and B/Automatic records a lot back then. It's just evolved over time and then it became the AH class car it is now. We bought the car at the end of 2006, and have been racing it ever since.

What is the Dodge NHRA Hemi Challenge?

Who built the car?

It was a Ken Keir built car. It's well over 20 years old, but in my opinion (maybe I'm a little biased) it's one of the best AH cars out there. It's a great car, and it works great. Ken Keir did a good job building it, and you know, Ray and David have done a good job keeping up on the little updates over the years. They know to really make one of these cars go down the track, it's certainly one of their specialties.  Does the car stay at your shop, or the Barton’s? It depends what's going on, but the car is at our shop right now. I took the Hemi up [to Ray Barton] and we got it all yanked apart and they're plugging away on it already. In this short turnaround time, they will freshen her up and get everything in top-notch shape for us. But it depends, like I said, sometimes it lives out there for a while and sometimes it's back at our place.

Who is Jimmy Daniels?

We know it's a Super Stock Hemi, what's the rest of the car?

It's still torsion-bar up front, with a four-link rear suspension and a Ford 9-inch rear end. It had a Liberty four-speed transmission, but for Indy it's going to have a TorqueFlite.

What's the advantage of each transmission?

My dad acquired the four-speed stuff from our teammate Brian Hard, and wanted to give the four-speed a whirl. He tried it in 2014 and 2015 and we didn't really run it a lot and didn't have great luck with it. Then 2016 came along and that's when I started driving. Ray and David wanted to put the automatic back in for me to learn how to drive the car.  Over this winter they wanted to give the four-speed a whirl again, so we had everything in the car set up for that. You can interchange the automatic and four-speed within like half a day. The four-speed should be faster on paper, but there's a lot that has to go right and the clutch has to stay perfect. The automatic is just bulletproof and they really never miss a beat.

So we've seen you run with an automatic, the four-speed would have been new?

Right. We aren't coming to Indy this year to experiment. We thought we were going to have time to test with the four-speed this year, and if it showed promise, we would have taken it to the U.S. Nationals. But then the whole COVID-19 deal hit, and with the limited number of races and everything going on, we just decided to switch it back to the auto before Indy. 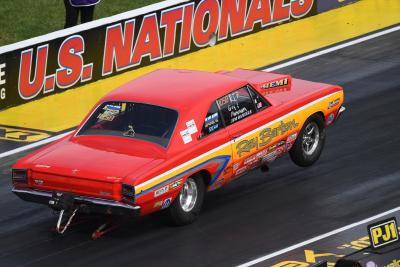 What other secrets does the car have?

I mean, in Super Stock, you know, you're allowed to tub the car in the back and put big tires on it, and you're allowed to port the cylinder heads and do a bunch of modifications to the engine that you're not allowed in Stock. You're allowed to mess around with camshaft more and, you know, it opens the window up to the things you can do inside the engine to an extent. You can do whatever you want to the manifold, but the carburetors have to be stock.

What's the best the car has ever run?

The best I've gone with it was 8.22 seconds at 160.52 mph. That was in pretty good air at Gainesville two or three years ago. Usually in Indy it'll run in the 8.40s or 8.50s—it really depends on the atmosphere.

What makes the car so brutal against the competition?

The attention to detail of Ray and David Barton. I mean, I really cannot say enough great things about those guys. They are the best. They look over that thing with a fine-toothed comb. Ray and I took the engine apart together, and he studied every single part. I put 60 passes on that thing before we decided to freshen it up—and that's a lot for one of those. Most guys don't even put 10 runs on one of those things. That engine in our car is going to be 11 years old, it's the engine that won Indy back in 2010 when my dad was driving. So that really shows you what the Barton's are capable of doing, and what they're able to provide you with. How extensive is a "freshening" of the engine at this level?  It just depends on how everything looks inside. The Hemi spins nearly 10,000 rpm on a pass, and typically gets bearings and rings using a quick hone. They touch the heads and do a valve job and swap out the valves depending on how many runs are on them. Other parts get replaced depending on what stage of life they are at. This time it will get new pistons because we've been running the old ones since 2015.  Does a car this well sorted ever throw any surprises at you?  The Barton’s have run that car and those engines (in various cars) long enough that they have it figured out. I mean, they treat it like a Top Fuel engine. They run the valves after every pass, they inspect the valve train, they look at the data on the computer trying to find a thousandth. That car really never lets us down, even last year at Indy when it spun the tires on me two times.

Bet that surprised you…

They spun in the third round and got my attention. I mean, I was out there hunting for a win and it spun. We went back and took the tires off and ran them down to Mickey Thompson, and those guys threw a brand-new set of tires on it for me. The next run, it went right down the boulevard and went low e.t. of the race. But then in the final it spun again, and you want to talk about your heart in your stomach...but the Barton's had enough power there that I was able to drive around the opponent at about 1,000 feet.

What's next for this program?

There's a lot of people that are pretty close to us. There are some guys that are within .500 of us at times, and the Comella’s, they've outrun us at Indy. If you haven't figured out, the four-speeds really have an advantage in the heat compared to the automatic. When in really cool air with like a 30.0 barometer and around 60 degrees, the four-speeds just can't hang with the automatic, but then in the heat, you know, the four speeds have an edge.

But I mean everyone is getting pretty close… It's great that Ray has the combination of fine-tuned and, you know, we're fast. At times, we have a couple hundredths on an opponent, but as a driver you want to mentally lay off on the Tree. I did that two times last year at Indy, and man, it almost bit me, but thankfully they had enough under the hood to keep the nose out in front.

See what the competition has had to endure

Fans in attendance or watching NHRA on FOX and NHRA.tv will also get to see and hear Hemi cars rumble down Indy’s famed return road—as they’ve done for more than 50 years —with a special Hemi Challenge car parade on Friday, Sept. 4. to highlight these truly unique and pristine race cars, as well as the drivers who race them.