Mopar Super Stock racer Jimmy Daniels has not lost a round in the Dodge Hemi Challenge since 2016, and brings an umblemished 14-0 record and the hope of a fourth straight win into this year's event at the Chevrolet Performance U.S. Nationals.
23 Aug 2019
Kevin McKenna, NHRA National Dragster Senior Editor
Feature

Whenever one contemplates the impact of a perfect 14-0 record in sports, it usually conjures up memories of the NFL’s 1972 Miami Dolphins and their historic unbeaten season. For Mopar Super Stock racer Jimmy Daniels, that statistic has a different meaning because it also represents the unblemished win-loss record that he’s carrying into this year’s Dodge Hemi Challenge in Indy. Since taking over the reins of his father Jim Sr.’s ’68 Dart in 2016, Daniels has not lost a round in the prestigious event. In his debut, Daniels picked up the win and the $15,000 first-place prize after Steven Hebert fouled in the final. A year later, he topped Canadian Wendell Howes in the final with an 8.404, and last year, Daniels topped Gary Wolkwitz’s similar Hemi Dart in the final to keep his streak intact.

“I remember the first year [2016] that I drove in Indy, and I had almost no experience,” Daniels recalled. “I was supposed to drive the car in Englishtown, and we had chassis issue after going back to the automatic [transmission], so I think I might have had four laps under my belt when we got to Indy. I think my first full pass was in Q1. I really just wanted to qualify and maybe win a round or two. I never even thought about winning the race. Then, to go out and win a second and a third time is unbelievable, especially to win a race with so much prestige.”

When it comes to the possibility of a four-peat, Daniels is well aware that history is not on his side. John Friel won three straight SS/AA class titles from 1992-94 but couldn’t get a fourth. Even Charlie Westcott Jr., the most decorated racer in the history of Hemi Challenge events, never won four straight titles. Westcott drove his popular Warfish Barracuda to six wins between 2005 and 2015 but never strung together four consecutive victories. 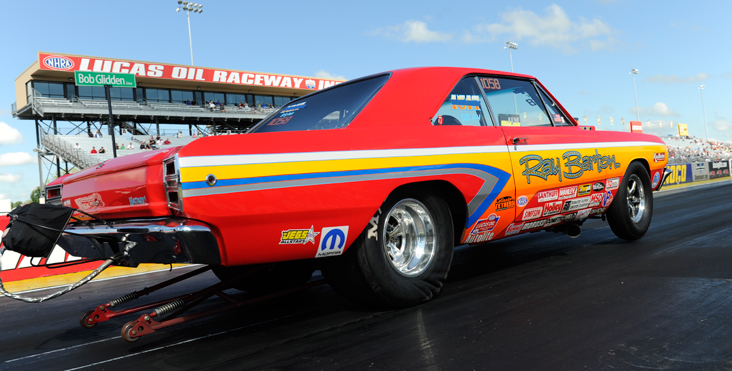 “I think our odds are actually pretty good,” said Daniels. “We finished putting the car together last week, and it’s ready to go three weeks before the race. We’re going to make a couple of runs at the Cecil County [Division 1 Lucas Oil Drag Racing Series race], and if all goes well, we’ll put it in the trailer and head to Indy. We don’t run this car too often, but we’ve got good power. Ray and David [Barton] freshened the engine, and as long as the driver can do his job, I know the car and the engine will be there. Of course, you always need some luck. I think I’ve been coming to this race for about 15 years when my dad was driving, and we’ve seen some crazy stuff happen.”

Daniels recently celebrated his 23rd birthday, which means he’s still most likely the youngest driver in this year’s Hemi Challenge field, but when it comes to experience, age is irrelevant. Unlike many Hemi Challenge racers, Daniels is an active class racer who races a pair of Chevy Camaros in Super Stock and Stock. Last year, he captured the Northeast Division Stock championship, an especially impressive feat considering Division 1 events usually draw upwards of 90-100 cars. Driving two cars at most of the Northeast Division events means that Daniels is able to stay sharp almost year-round, and that’s usually reflected in his reaction times each Friday in Indy. During his 14 round-win streak, Daniels rarely yields much to his opponents on the starting line, and the Barton-prepared Hemi in his Dart has traditionally been strong enough to do the rest. So far this season, Daniels has reached the quarterfinals at a handful of events in Stock and Super Stock.

“It definitely helps to be in another car all year long,” said Daniels. “The other cars I drive are set up a little differently and performance-wise, our Super Stock Camaro drives nothing like the Hemi car, but it’s good to get more hits at the Tree. That’s a big help.” 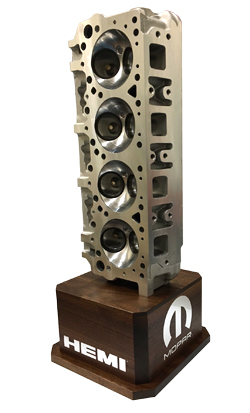 For many racers, the Dodge Hemi Challenge is much like a high-stakes poker game, where no one is willing to show their hand until all the chips are in the center of the table. Most Hemi racers don’t run many events, and even those who do usually save their best equipment for Labor Day weekend. That makes it especially tough to predict pre-race favorites, but Daniels is pretty sure he knows who to watch among the 20 or so expected entries.

“For one, my teammate Gary Wolkwitz is fast because we know what he’s got for power,” said Daniels. “I know Stephen Comella will be right there, and the same for Bucky Hess and Stephen Hebert, and Wendell Howes also runs pretty well. Honestly, there is so much luck involved that almost anyone who enters can win this deal.”

Fielding a competitive car in the Hemi Challenge requires a significant amount of resources and manpower, and Daniels has plenty of support from his parents, Jim and Dawn; his girlfriend, Brittany Boltz; and her parents, Andy and Tammy; as well as engine builders Ray and David Barton. He also enjoys corporate support from Mickey Thompson Tires, Odyssey Batteries, and VP Fuels.

“I’m just really lucky that I get to drive one of these cars, and I’m grateful that after more than 50 years Mopar and Dodge still stand behind this race,” said Daniels. “It’s a special event, and we look forward to it every year. I just hope we can keep our streak going.”