John Kimble, one of the first successful black Top Fuel racers, passed away Jan. 6 and is remembered by friends and family as a quiet giant who loved family and racing. He was 81.
10 Jan 2020
Phil Burgess, NHRA National Dragster Editor
DRAGSTER Insider 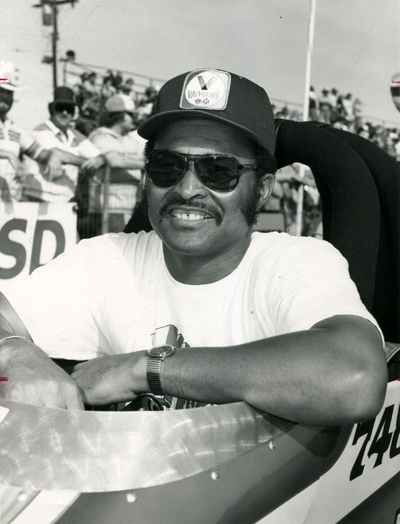 We lost another pivotal person in drag racing history earlier this week when John Kimble passed away. The Compton, Calif., based racer was one of the first black Top Fuel racers to find modern-day success in the sport with the family-owned dragster run out of his Kimble Trucking business.

Kimble never won an NHRA national event –- his finest outing was a semifinal finish at the 1980 Winternationals -– but he left a huge impression of his racing friends and rivals and, undoubtedly, on young black fans looking for a hero.

Kimble was a mountain of a man, standing well over 6 feet tall (6-foot-4 according to some estimates) but was a gentle giant and an inspiration to all. Diagnosed with cancer a dozen years ago, he far outlived a doctor’s dire eight-week prognosis. He continued to drive trucks until he passed away Monday, Jan. 6, of a heart attack.

Kimble started racing motorcycles in 1962 before moving to four wheels in 1965 with an injected ’55 Chevy. Form there he progressed into an injected Funny Car, the George Ramos-driven Kemp & Kimble entry, in 1968 that was eventually crashed.

Kimble made the leap into Top Fuel in 1974 with a car that he ran with his brother, Larry, and a crew of family and friends that often numbered into the 20s. Kimble was all about family and made friends quickly and easily.

Bruce Iversen, who went on to run his own nitro and alcohol Funny Cars, was one of those longtime friends and saw him just days before Kimble died. They met in 1972 and even briefly fielded a nitro Funny Car together, driven initially by Jake Johnston and then Gary Southern, in 1978.

“He was a neat guy; there was only one like him,” remembered Iversen, whose pallet business was also based in Compton. “I was always close to him and his whole family, and they treated me and my wife like family. He was always very respectful and the kind of guy who you were just going to like. He was just a neat guy. 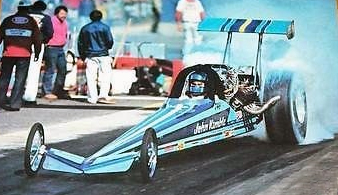 “John never had a lot of money to race with and it was tough, but he always made the most of it. Back then, we all did. If we could get our bills paid and get some new tires, we’d load up and go to Indy. We’d make an adventure of it, and we always had fun."

Even though professional black drag racers were few and far between, the issue of Kimble’s race never was really an issue. In a 1980 National Dragster PROfile article on Kimble, he said that the nature of sport never allowed race to be an issue, and Iversen said that Kimble's gentle demeanor and large frame were probably two of the reasons.

Kimble graduated from a big-block Chevy powerplant to a Hemi and ran with the best of the West Coast Top Fuel cars and also made trips across country, including to the U.S. Nationals. It was at the 1978 Indy event where Kimble’s car shook so badly that he almost passed out, which he attributed to a new, looser six-point cage they had recently installed. Ironically, when the same malady struck Richard Tharp while driving the Candies & Hughes dragster at Seattle last that year, Tharp did pass out and crashed, and Kimble loaned Paul Candies his car so that they could continue their championship battle at the season finale in Ontario. 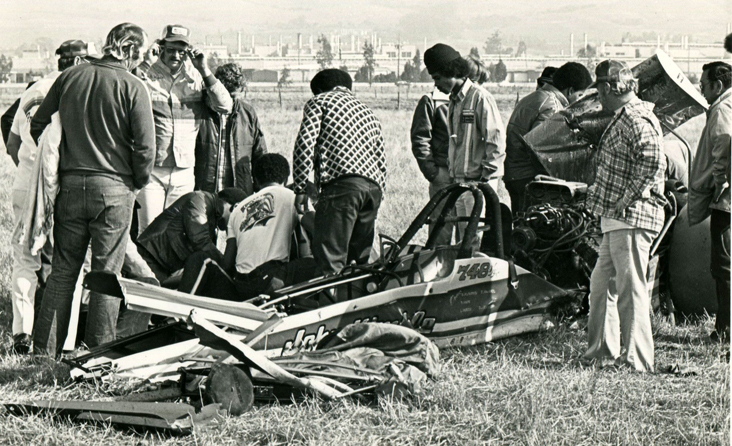 Kimble himself would suffer a car-destroying crash the following New Year’s Day at Fremont Dragstrip’s Nitro Bowl event where, according to famed NorCal photographer Rich Enos, whose photo is above, Kimble’s car swerved out of his lane and although he was able to gather it back into his lane, the car ended up going off the end of the track.

Kimble suffered only minor injuries and bounced back with that final-four finish at the 1980 Winternationals with a car built, as always, by Don Long. He qualified an impressive No. 4 with a 5.86 then beat Jeb Allen and Bob Noice before smoking the tires against eventual race winner Shirley Muldowney in the semifinals. Kimble continued to compete in Top Fuel through the 1985 season before retiring from competition.

I also got a chance to speak to Chris Kimble, John’s nephew and the son of Larry, who passed away in 2012. Chris was too young to remember their exploits but heard the stories of their efforts in the years after.

“My uncle was a big strong guy that I always looked up to and he and my dad were always thick as thieves,” he remembered. “He loved family and was very passionate about Alabama, where he grew up and his parents still lived. We’d go back there two to three times a year, even after my father passed, and we were planning to go again this month. He had a great work ethic and was always pushing people forward to do the right thing. He could be super stubborn but he was a great guy.” 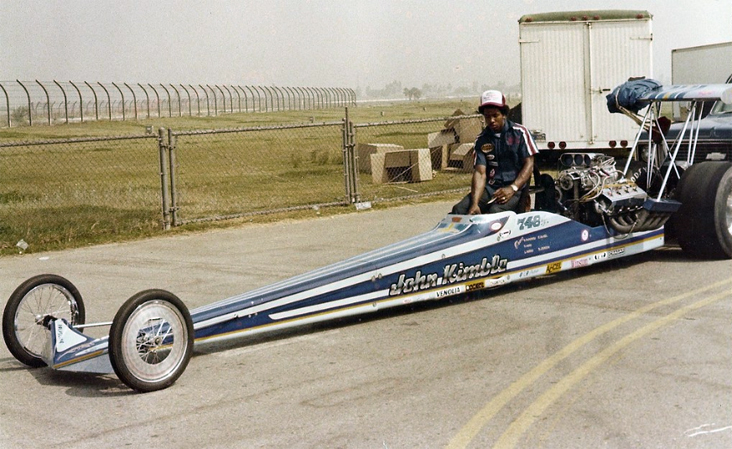 I also reached out to Rodney Flournoy, who had a long relationship with Kimble dating back to working on his Top Fueler in the late 1970s. That’s Rodney above steering Kimble’s car back to the pits at the 1978 World Finals at Ontario Motor Speedway in this great photo from Brian Crawford's Atomic Hot Links Flickr page, where he has some more Kimble pics or here for his entire 1978 Finals album.

“I met John when I was 13 or 14 years old,” Flournoy recalled. “A good friend of ours, Eugene McNeal, asked if I could help him run his car. My dad had taught me all about building engines and working on cars, so it was a great opportunity for me. John taught me the ropes of driving trucks and traveling all over the country from 1976 through 1978 before I got my first Funny Car. I remember our first trip together to Indy in 1976. That was really something for a kid from California.

“We stayed in touch through all the years and I even saw him at the Nitro Revival event at Irwindale last May. He was like a second father to me all those years. He taught me a lot over the years and the first guy who took me to a bar and got drunk! We’d go all over, to places like Union Grove, Wis., to run at Great Lakes [Dragaway]."

RELATED: Rodney Flournoy: Still nitro after all these years

Funny Car world champion siblings Tony and Cruz Pedregon both had connections to Kimble from their days growing up in Gardena, which neighbored Compton. The brothers were also involved in the world of diesel trucks and often did business with Kimble and spent time with him and his family.

“Cruz and I even got to be crewmembers on his car at one race, the 1984 Finals [in Pomona],” Tony remembered. “We were just teenagers and used to hang out at Joe Pisano’s business, and we had gone to the races with Pisano, who was helping Kimble that weekend. He and [crew chief] Gary Slusser put their Funny Car combination into John’s car because Joe really liked John, not just because he was a customer but he was a real gentleman and a genuine guy. The car sounded really cool but we couldn’t get it qualified. On the last qualifying run, it sounded really good but they had a small fuel leak and they had to shut it off. It was still a memorable weekend for Cruz and I because we got to wear his cool blue crew shirts.

“His equipment always looked good; he had really nice trucks. I remember he’d use one of his truck to haul his Chaparral [trailer] out to the races; I think he may have been the first to do that. We'd go over there to visit and they used to have these legendary cookouts where they’d cook alligator and ribs. They were the real deal and John was just a very cool guy that we connected with. He didn’t have the most competitive car, but he always had some of the nicest equipment on and off the track, and he really enjoyed racing. He was always good to Cruz and I. He was a straight-up kind of guy.”

"You know me, I love trucks,  and John's were always high-end Peterbilts, shiny and chromed, just like his racecars," he said. "I'm a detail guy and I notice that kind of stuff. John was a classy guy on and off the track and carried himself like a pro athlete. We used to joke around that he looked like Muhammad Ali. He was big and strong and just carried himself the right way. He didn't have a lot of money to race on but his presentation was always high-dollar, and I admire that a lot."