Rodney Flournoy: Still nitro after all these years

There are just certain racers you know who always bring a smile to your face, and for me, one of them is Rodney Flournoy. I met Rodney and his family my first year on the job back in the early 1980s and fell in love with them. Their Funny Car operation was, as we used to say, “low buck” but what they lacked in finances they overwhelmed with passion and fun.

Rodney always had the biggest smile on his face and always seemed to be laughing, just happy to be living out every kid’s dream of having a Funny Car. His dad, Eddie, was amazing in the lengths that he went to to help further that dream. 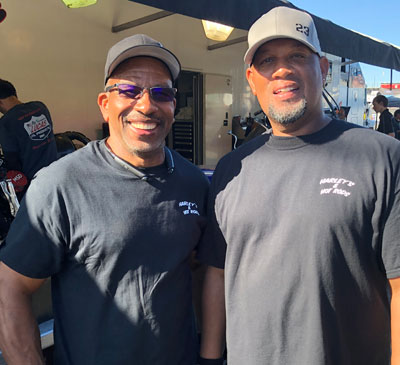 When I ran into Rodney in the pits last month at the Auto Club NHRA Finals –- as I seem to each year –- that same smile and laugh still there all these years later as he and his nephew/crew chief, Ricky, hung out at Del Worsham's pit, and I wanted to share his story with those of you who had never heard of him and bring back fond memories to those of you who went to the drags in SoCal in the early 1980s and remember him as a crowd favorite at places like Orange County Int’l Raceway.

The young kid we all knew and loved will turn 60 is early January (how is that possible?) but he’s still racing like a 20-year-old, competing in George Doty’s Godzilla Fuel Altered and in Doty’s Crazy Horse 5.90-index Funny Car in the NHRA Hot Rod Heritage Series, and racing alongside daughter Thais, who also runs an altered there, continuing the Flournoy family’s legacy that stretched back to when Eddie was crewing for “Jazzy Jim” Nelson in the 1950s.

For the history portion, I’m going to crib a little here from a National Dragster column I wrote back in 2010 shortly after Eddie died of prostate cancer at age 74. 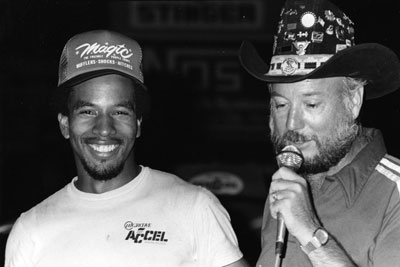 When I first met them in 1982, the Flournoys were among a handful of black nitro racers who frequented OCIR, along with guys such as John Kimble, Leon Cain, and Clarence Bailey, but their popularity transcended any color barrier, and their easygoing manner and obvious dedication made them favorites from the front offices of the track to the far depths of the pits. You could say the name “Rodney” the way people say “Shirley” for Shirley Muldowney and even though there are others with those first names, everyone knew who you meant.

After learning the nitro ropes from his dad, Rodney was tuning Kimble’s Top Fueler in 1975, at the tender age of 15. After Cain suffered a freak eye injury, Rodney made a pass in Cain’s Ebony Prince flopper at Irwindale Raceway and before long the family had its own car, a hand-me-down ’74 Mustang purchased from Jerry Ruth for $5,500, which was a big investment for the family.

“I remember the night he came home from Seattle with that car and watching him back the ramp truck into the driveway,” Rodney told me years ago. “He opened the side door, and there was a Milodon aluminum block that he bought from him as well! 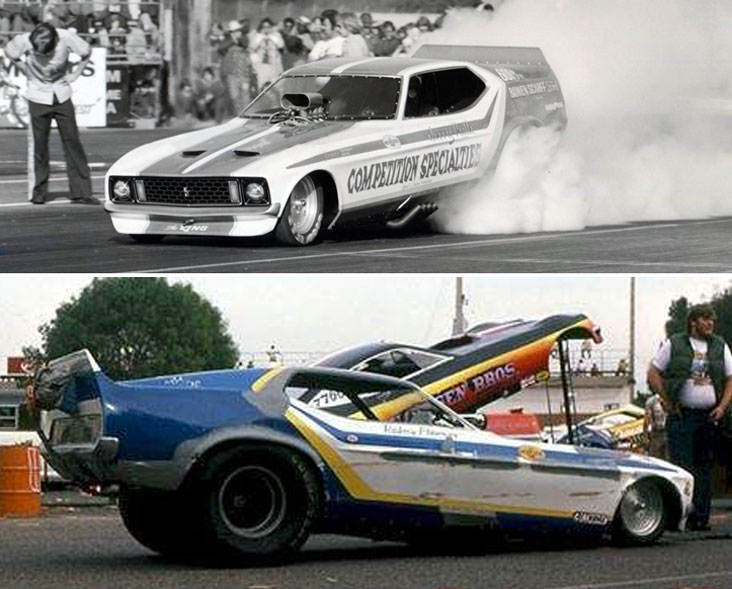 “We took some rubbing compound and took ‘Competition Specialties’ off the side, started piecing things back together, and away we went. I think my dad sent Jerry money every month for a year — I think it was $500 a month.”

The battle-scarred body wasn't especially pretty to look at, but to Rodney, it was a beautiful sight. Rodney was living at home, and both he and his dad were working as mechanics. Every spare dollar they had went into the race car, back in the days when you could actually run a car on that kind of money. 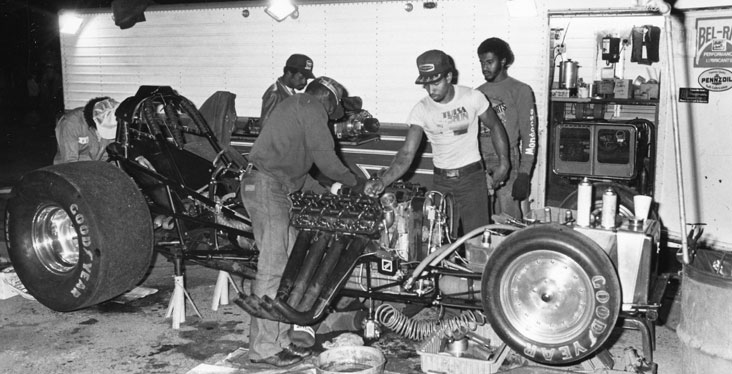 “We were putting as much money as we could into the car,” he remembered. “My mom, Rosa — who actually met my dad at the races in Bakersfield and loved the sport, too — was a big supporter; she told us how much we could spend each month on the race car, but she was always there with us, as were my brothers, Robby and Ronald.” (Rosa is now 82 and still cheering for Rodney.)

Running a Funny Car on any budget was no easy task, but the Flournoys learned how.

“We pretty much had no spares at all,” he said. “We probably had a couple of pistons and bearings, but if we broke a valve or anything like that, our day was done. Knowing when to get out of it and when to stay in it, because I knew what we had to spend, made me a very aware driver. Knowing what we had in our pocket, we gave it the best tune-up we could. It was actually a pretty good time to have a Funny Car. It wasn’t really that expensive to run it like we did, and with all of the match racing, you could pay a lot of your costs. You couldn’t do that today.

“Running at Orange County was the best for me, just being there and being able to go down the track and having all of the fan support. I also credit Lynn Rose, who worked at the track; she was very good to us, and I have to give a lot of credit to Joe Pisano for all of his support. Joe [who owned Venolia Pistons] was very good to us with parts and advice. Even if we didn’t have the money, he’d tell us, ‘Come pick up the pistons; we’ll deal with it later.’ ” 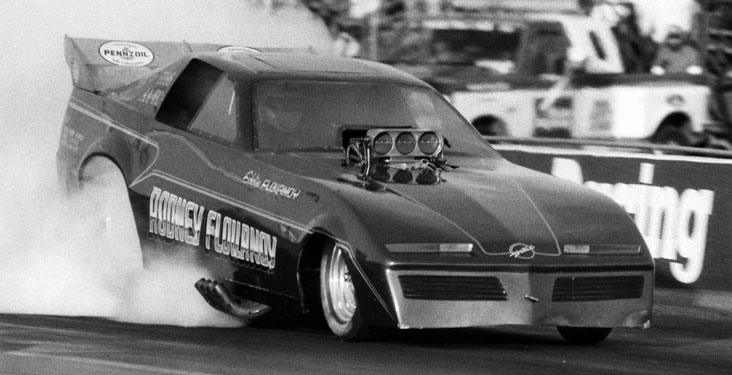 The aging Mustang body gave way to a new Omni, which later was replaced by an ex-Dale Pulde War Eagle Trans Am, a Beretta, and, finally, another Trans Am, that one purchased from fellow OCIR "kid" Mike Dunn (the ex-Ed Abel Snickers body). Despite having more passion than power and more moxie than money, they always ran well; however, they never qualified for an NHRA national event. The closest they came was in Seattle in 1990, when Rodney missed the field by one-thousandth of a second when he was bumped at the last instant by Jim Murphy. “5.746 to 5.747,” he said, the numbers burned into his brain. 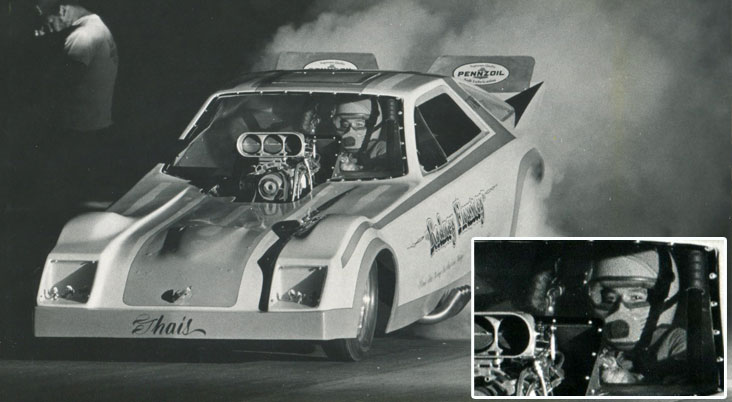 The photo above is one of my all-time favorites of Rodney. It was taken by the late Leslie Lovett at OCIR. He had set up a remote camera flash on the starting line and stood further downtrack to take the actual photo, with the goal being to see the driver better through the flash shining in the side window opening (this was, of course, before fully-enclosed side windows). He nailed it. And when I blew the photo up for a little picture-in-picture action, man, just look at Rodney's eyes gleaming in delight as he puts the gas down for the burnout. Sheer joy.

“Those were good times,” he recalled. “We’d run Seattle, Boise, Spokane every year. Boise was the best because John Force was always there, and we’d all be sitting around the pool having a good time. Force and guys like Gary Densham and John Martin and Jim Dunn and all of those OCIR guys."

By 1993, with match racing dried up and costs going through the roof, it became clear that they could not continue. Rodney drove Charlie Marquez’s Urban Flyer Top Alcohol Dragster for several years at national and divisional events before Marquez moved to Texas.

After he left the cockpit, Rodney stayed involved in the sport with his daughters and nieces through the NHRA Jr. Drag Racing League. Eddie, meanwhile, took his experience to the nostalgia Funny Car scene, working on the Crazy Horse Mustang of George Doty, which eventually opened new doors for Rodney.

I reached Rodney on the phone yesterday morning and he was on his way to do one of his favorite things: work on race cars. He’s still a mechanic for a living –- he’s been with Sparkletts for 23 years servicing their fleet of water-bearing trucks –- and a mechanic for fun and still enjoying the hell out of life.

“Man, every day is a good day,” he said, his familiar, infectious laugh pouring through.

After sitting out for more than 15 years, Rodney's life got a lot happier when he hooked up his with dad’s old team owner, Doty, in 2014 and got to return to the cockpit to drive Doty’s Fuel Altered, dubbed Godzilla.

“My dad had passed away but my brother was working for George, and he asked my brother for my number and offered me the chance to get back into driving,” he recalls. “He told me he couldn’t promise me the Funny Car but asked me to help him put together the altered and I re-established my license and have been running that thing since then. It’s a fun ride. It’s a 6.0 index and we’ve gone 6.11 in it. 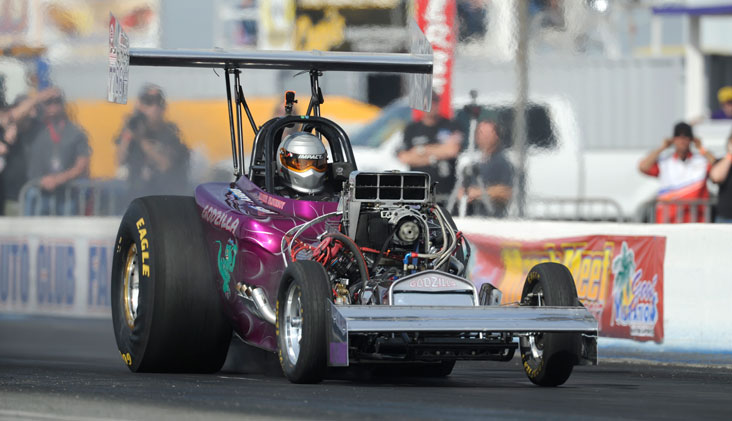 “After a while, George parted company with the guy who was driving Crazy Horse, and when the 5.90 [index] class was started at Bakersfield two years ago, I started driving that car, too. I was runner-up in that class at the March Meet earlier this year. It's a good ride; it takes a lot of money to run 5.50s and run in Nostalgia Funny Car, but we can go out there and have fun, run 5.90s all day, and not hurt our stuff. It’s a treat.” 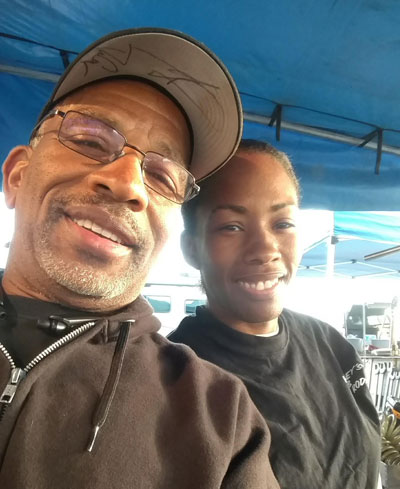 Doty had also purchased Rodney’s last Funny Car chassis -– the one that sat beneath the Beretta body -– and put an altered body on it for Thais (pictured at right with her dad) to run and dubbed it Goldzilla. She bounced back from an accident in the car in Fontana and they’ve built another car for her to run, probably in the Heritage Series’ 7.0 Pro class.

“For us, running the nostalgia series is fun and affordable,” he said. “We’re having a really good time. Like the Funny Car, it’s all family. It’s my brother Robby and his son, Robbie Jr.; my nephew Ricky –- he’s a numbers person and my crew chief; he's done a lot of studying over the years and is a natural with the tune-up. –- Thais, who’s my crew chief (and also the genius behind some great in-car camera work that you can find on YouTube); and my oldest brother’s son, LaRon.”

Eddie would be proud.