NHRA Drag Racing is known for many things, but the success of female race drivers and barrier-breakers in our sport is second to none in motorsports. On Thursday we lost one of the keystones of that legacy, Barbara Hamilton.
24 Apr 2020
Phil Burgess, NHRA National Dragster Editor
DRAGSTER Insider

NHRA Drag Racing is known for many things, but the success of female race drivers and barrier-breakers in our sport is second to none in motorsports, and yesterday we lost one of the keystones of that legacy, Barbara Hamilton. 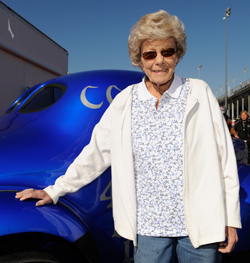 While other female drivers, including Shirley Shahan, Peggy Hart, Roberta Leighton, and Carol Cox, had been competing in their naturally aspirated cars, in 1964 Hamilton was the first woman licensed by NHRA to drive a supercharged car in competition with her blown ’37 Willys gasser. It took about two years and 20 rejected petitions before NHRA finally relented but she answered that faith by becoming a very successful and prolific winner.

Hamilton’s success, of course, paved the way for drivers such as Shirley Muldowney, Paula Murphy, Della Woods, and others to compete in Funny Car and, eventually, Top Fuel.

Although she became famous for wheeling her blue Willys, Hamilton’s first blown car was the ’34 Ford three-window coupe of friend John Latham. She helped him build the supercharged small-block Chevy that powered the car when she first drove it in 1959 in Erie, Pa. She was just a high-school senior at the time, but those early runs changed the course of her life. She bought the Willys and also built its blown 271-cid small-block Chevy engine as well. 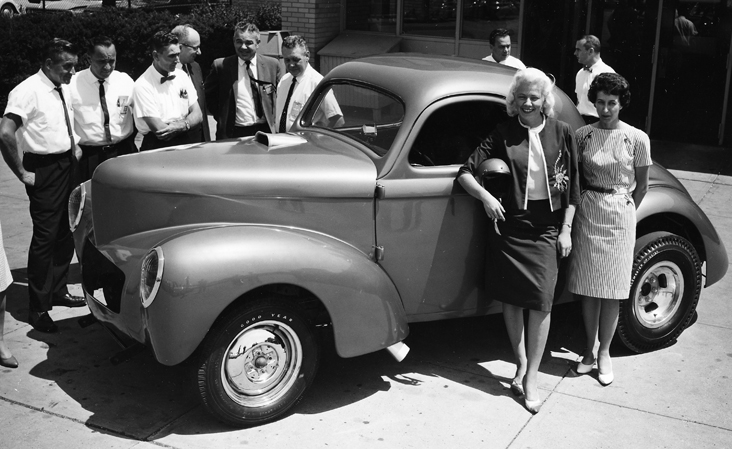 Hamilton was a professional technical writer at TRW during the week, where she met Nancy Leonello, who worked in contracts at TRW and had attended the same high school, two classes ahead of Hamilton. They became friends and racing partners and towed the Willys behind Leonello’s ’65 Impala all over Ohio, New York, Pennsylvania, and Michigan as well as each year at the U.S. Nationals in Indy.

“There were so many great memories,” Hamilton said in 2006, when she was named the Grand Marshal of the NHRA Hot Rod Reunion. “Two gals in their early 20s, racing a blown Willys in supercharged gas coupe and sedan class traveling the Midwest; it doesn't get any better than that.”

“One of the funniest stories I can remember was a race at Quaker City (my home track). We had run there Friday night and had blown a head gasket. We had to take off the blower, injectors, manifold, and one cylinder head. I fixed the O-ring in the block, put on a new head gasket, and finished putting the motor back together. We finished late on Saturday night. We left for the track about noon on Sunday. We got there and tried several times to fire the car, without success. Pulled the line off the injectors and cranked the motor over to see if we were getting fuel from the pump and we were. By that time, we had quite a large crowd gathering to watch us. Pulled a plug out and it was totally dry. As I was standing there, I spotted a tiny piece of duct tape and knew immediately what I had done. I always put tape across the bottom of the blower when I removed it. In our tired haste Saturday night, I had forgotten to remove it. I didn't want to be embarrassed in front of everyone; so we just walked away and went up to the stands until the crowd went away. 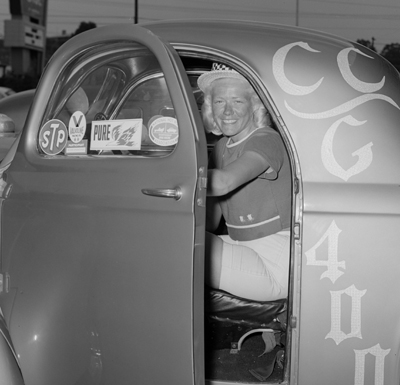 “I can recall another time when I put the Hydro [transmission] back in without the big O-ring, and had automatic transmission fluid running out everywhere when I was warming up the trans on the jack stands at the track. What I miss the most is the challenge.

“I think in many ways that we were pioneers. I think most of us owned, built, tuned, and drove our own cars. We didn't have crate motors, fully assembled cylinder heads, electronics, and computers. We bought parts from junkyards and built short blocks in our backyard garages. It didn't cost us a whole lot of money and most anyone could do it. I sometimes feel sad that some young people today couldn't compete as I did back then. I am glad that I raced when I did. It was simple and fun back then. It is very much a job today.”

Hamilton and Leonello, who is two years older, remained good friends throughout their lives and lived just a few miles apart with a regular weekly lunch date, and I was able to speak to Leonello yesterday.

“We had some great times together,” she reminisced, “and we spent a lot of late nights in her garage working on the car. Back then, we were all backyard mechanics, not like today. It was a lot of work to keep the car running. We ran the car every Friday and every Sunday and then she spent the week pulling the heads off, replacing the head gaskets, and getting it ready for the next race. It was a lot of work, but I met a lot of wonderful people because of it. That car meant everything to her, even to this day."

Hamilton won the CC//Gas class at the 1966 Springnationals in Bristol, Tenn. (above) and set a NASCAR national record drag racing record of 11.94, but storm clouds lay ahead.

In August 1967, just a month before the U.S. Nationals, NHRA unexpectedly revoked the supercharged competition licenses of Hamilton, Murphy, and two others. Murphy, who in late 1966 had become the first woman licensed by NHRA to compete in the new Funny Car class, and Hamilton, did not take it lying down. Hamilton, unable to get clarification from NHRA on the reason for the revocation, traveled with Leonello to NHRA headquarters in Los Angeles. Murphy, who was sponsored by STP, had the support of automotive titan Andy Granatelli.

“She was really upset about that because she had worked so hard to build a car and then get the license and then they took it away and they wouldn't tell her why,” said Dick Advey, her husband of nearly 50 years and love of her life for nearly a decade before that. “She already had an entry for the Nationals that year this way they told her she could compete in a Stock class, but she wasn’t interested in that, so she went all the way to California to ask in person. She left without getting an answer; they told her to go home and sit tight.”

She and the other ladies finally got their licenses back in January, but Hamilton had not been idle. She had built a bigger 295-cid engine and replaced the 4-71 blower and Hilborn two-port injector with a 6-71 and four-port injector. They even towed the car out west to compete at legendary strips like Lions and Irwindale and in 1968 -- where "Bones" Balough, drove the car. Later that year, Hamilton was the C/Gas Supercharged class runner-up at the U.S. Nationals. She moved up to B/GS before her retirement in 1972 and her marriage in 1973 to Advey.

For more than two decades they enjoyed life away from racing and lived in Florida, far from the cold Ohio winters.

“We bought a place in Florida right on Kissimmee Lake, bought a bass boat, and we went fishing,” her husband told me yesterday. “I have to be the luckiest guy in the world because the two things I love most of all are drag racing and fishing, and so did she. We had a great time and she was better than me at fishing. In the 11 years we were down there, she's caught two 10-pound bass and I didn't catch one.”

Even though the Willys was housed in Don Garlits’ Museum of Drag Racing, each May they’d get the car and take it on tour to more than a half-dozen nostalgia events in the summer beginning in the late 1990s then return the car to the museum, and Barbara Hamilton was introduced to a new legion of fans and recognized by her past fans.

“I think what is so remarkable is the number of young adults that show such a great interest in how the racing was in the '60s,” she said in 2006. “They are so knowledgeable, which amazes me, and so eager to hear our stories. I so enjoy talking to them all. 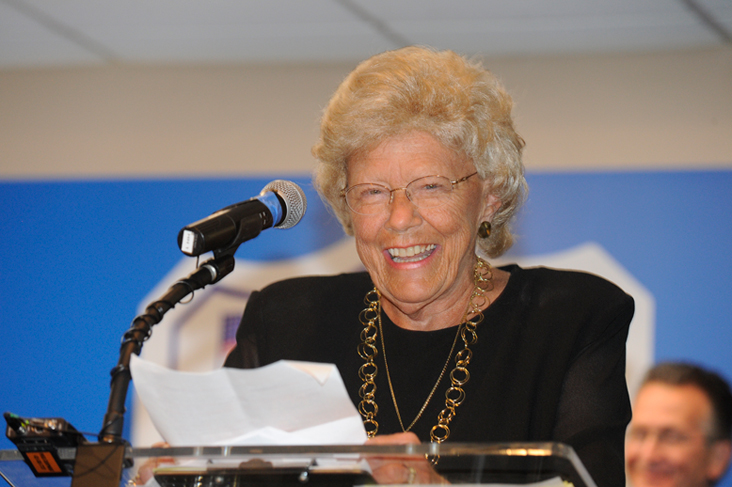 “I would have never believed that I would be honored so many years later. I think all of us racers are amazed at the interest and the homage being paid to us. I always felt that no one would ever remember that I was the first female to receive an NHRA license to drive a supercharged car. It wasn't until I was notified by ‘Big Daddy' Don Garlits in 1991 that I had been selected for induction into the International Drag Racing Hall of Fame for the 1992 class, that I realized that someone had remembered. I am surprised in some ways that people remember my racing. We were rather low-key and my car was very plain -- no lettering, and I never had my name on it except when we went to the Nationals at Indy.”

Although John Force was one of her favorite drivers, she was in awe of the accomplishments of many of today’s female racers. “They are living their dreams; been there; done that,” she said. “I know their frustration, joy, and satisfaction.” 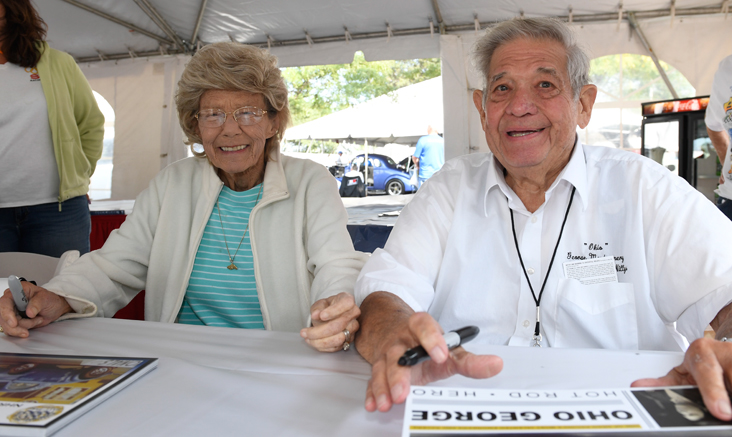 “She was surprised that she was still being remembered and honored,” said Dick of his wife, pictured above with fellow supercharged gasser legend "Ohio George" Montgomery. “She was really delighted with the fact that people remembered her and thought it was just wonderful that people cared enough to want her autograph. She was a delightful lady; she loved everybody.”

In 2014, Hamilton was named the winner of the Pat Garlits Memorial Award, which recognizes the female sportsman racer whose dedication, determination, and passion for the sport of drag racing embodies the spirit of Pat Garlits. 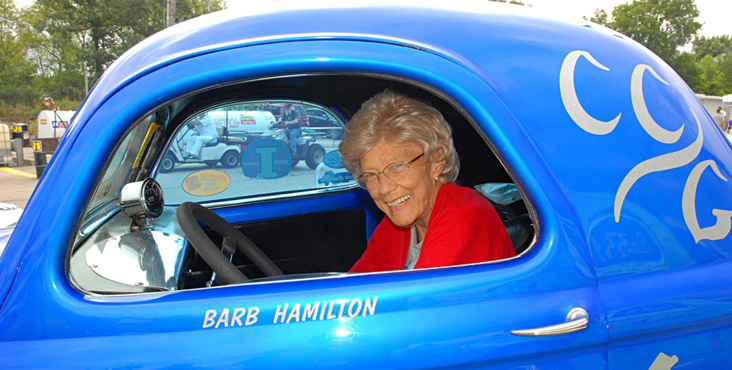 As a testament to her character, Hamilton tackled and beat cancer seven years ago and remained in reasonably good health until March 21, when she was hospitalized for three weeks and doctors were unable to determine the cause of her illness (it was not COVID-19). She was later released to a nursing home where she spent two weeks. During that five-week period, heartbreakingly, her husband was not able to visit her due to the coronavirus regulations. As the end grew near, Dick was finally able to bring her home to him and to her brother.

“Not seeing her, that was as tough as it comes,” he admitted. “But I was glad to have her home and she was happy to be home, and we got four wonderful days together before she passed. It was a combination of dementias that got her in the end; at least that’s the only thing that the doctors could tell me.”

Hamilton may be gone, but we’re all very lucky that last August she finished a book, Supercharged, about her racing days. Dick is selling them from their home, and you can get your copy. Send $34 ($28 plus $6 shipping and handling; cash or check) to Dick at 37201 Beech Hills Drive, Willoughby Hills, OH 44094. I can’t wait to get mine.

Thanks for following along, remembering our heroes and legends, and the continued appreciation of my remembrances. And please, be safe out there.