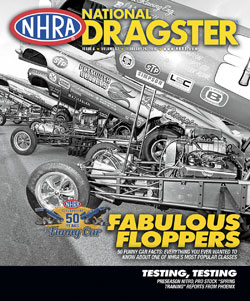 Sometimes you just never know who’s going to be on the other end of the phone (especially in my line of work), so it was a great pleasure – and great timing – when I learned that the voice on the other end of the line earlier this week belonged to pioneering female drag racer Paula Murphy, the first woman to be granted a license to drive a nitro-fueled car of any kind – in her case, a Funny Car.

She had heard from friends that her car had been on the cover of a recent issue of NHRA National Dragster and was calling for details and to get a few extra copies of the issue, which included several features on the history of the Funny Car class as part of NHRA’s yearlong celebration of 50 years of floppers.

The cover, pictured at right, included her Barracuda as well as the floppers of Roland Leong, “Big John” Mazmanian, and Candies & Hughes lined up along the guardrail at Orange County Int’l Raceway in 1969, presumably for a mass fire-up. We loved the photo – one of many shot that day -- and thought it would make a great cover for the issue, and we were right.

Well, you know what happened next on that phone call. “Of course I can send you a few extra copies, Paula, and hey, while I’ve got you on the phone ... ” 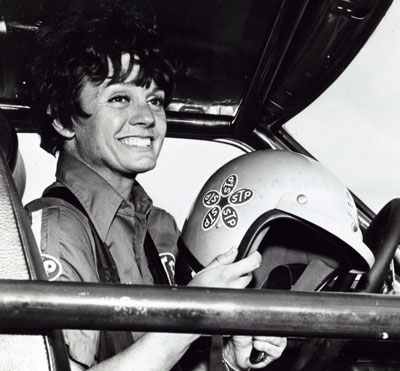 Paula Murphy certainly came to the task well equipped and experienced, especially at being a pioneer. She had raced sports cars for almost a decade and had set hundreds of women’s records in a variety of motoring feats. And at a time when women weren’t even allowed in the pits at the famed Indianapolis Motor Speedway, she became the first woman to drive an Indy-style race car there, thanks to her lifelong friendship with STP’s Andy Granatelli, in whose Novi race car she lapped the fabled Brickyard oval. Speed clearly was not an issue either, as she had driven Walt Arfons’ Avenger jet dragster to a female land-speed record of 226.37 mph at Bonneville.

In 1964, she got her first taste of drag racing when she was offered an Olds 442 by the LA and Orange County Dealers Association. The car was prepared by Mopar legend Dick Landy, and she raced it for two years in Stock eliminator.

After one race at Southern California’s Irwindale Raceway, a young helper insisted that they stop by The Irwindale Inn, just south of the dragstrip at the corner of Irwindale and McKinley avenues and the local watering hole and hangout for Irwindale’s fast and famous. There, she met Jack Bynum, who would become her mentor, crew chief, and dear friend.

“Fat Jack,” as he was known at the time, was a familiar face among the Top Fuel ranks but obviously thought the timing was right for Funny Car.

“He came up and introduced himself, and we chatted for a while, and he said that I should consider running a Funny Car.” she remembers. “I said, ‘I don’t know about that,’ because back then, the Funny Cars were pretty crude, but one thing led to another, and I said OK, I’d give it a try, and before long, I had a Funny Car.” 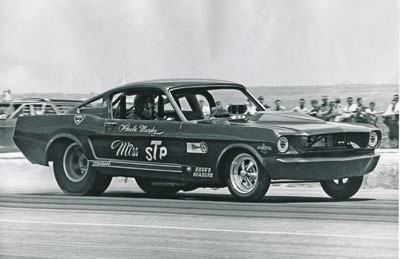 Bynum built the chassis and the 392 engine that sat beneath a Mustang body. Granatelli provided sponsorship for Murphy, who quickly became known as Miss STP. Tom McEwen, then the president of the UDRA, was the first to welcome the idea of a female Funny Car racer – especially one with a sponsor and a powerful ally in Granatelli – and oversaw her licensing at Lions Drag Strip in late 1966. It took a couple of outings before she got the required signatures, provided by none other than McEwen and Don Garlits, and, once she had proven herself capable, NHRA acceded and granted her a license.

The Mustang ran low-eight-second passes through 1967, and Murphy found herself a popular draw with track operators all eager to see the “lady racer.”

“I was a real oddity, and I think a lot of strip operators thought it was pretty good to sell tickets,” she said. “I didn’t have problem getting booking dates. I was very well accepted not only by the tracks but by my fellow racers. Back then, there was a lot of camaraderie between the teams helping one another out. We were a big family.”

Late in 1967, however, word came down from ever-cautious NHRA that her license had been rescinded, along with those of several other female racers in the faster classes, and that the quickest class in which they would be allowed to compete was Super Stock.

Fortunately for Murphy, STP was an NHRA sponsor, and Granatelli again interceded on her behalf. The decision was reversed, but not before it cost Murphy and Bynum bookings at NHRA tracks. 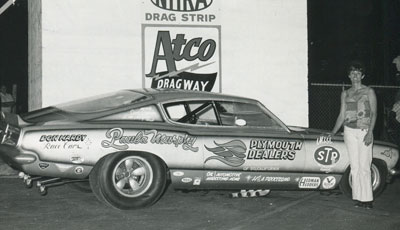 Murphy broke into the sevens and cracked the 200-mph barrier in 1968, but the crude Mustang – which didn’t even have a windshield when she first started racing it – was on its last legs. For 1969, Murphy bought the Don Hardy-built Barracuda, originally constructed for Larry Reyes before he signed with Leong for the 1969 season.

Della Woods, another early female Funny Car racer, was a regular opponent in those days, especially when Murphy rented a summer home at Geneva on the Lake, on the shores of Lake Erie just east of Cleveland, and plied her trade on the same Midwest tracks as Detroit-based Woods and her brother, Bernie, with their Funny Honey Dodge. Murphy only had a few dates with Shirley Muldowney, and breakage and bad luck intervened to the point that they never got to run against one another.

As for a lot of the Funny Car teams then, match races were where the money was, and Murphy and Bynum rarely competed at NHRA national events because AHRA and IHRA would pay her an appearance fee to run their big meets, and NHRA would not. Murphy and Bynum were often accompanied by her teenage son, Danny; her father, Paul; and their Alaskan Malamute. 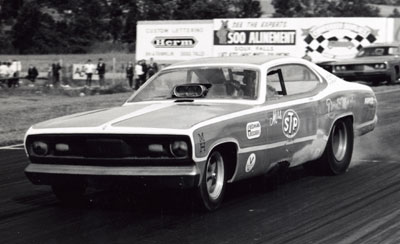 In 1971, Murphy was invited to Talladega Superspeedway to drive the STP Dodge stock car of Freddie Lorenzen, with which she broke the NASCAR women’s closed-course record at 171.499 mph. The team got a new Duster-bodied Funny Car that not only toured the country but also went to England in 1973, along with Don Schumacher, as part of a three-weekend trip organized by Tony Nancy. A buyer was already in place for her car, which would stay behind, while Murphy pursued a new assignment as a rocket-car driver. She had wheeled Tony Fox’s Pollution Packer to a 258-mph pass at the Winternationals and was slated to drive Ky Michaelson’s rocket dragster in 1974.

In early 1974, on a fateful day at Northern California’s Sears Point Raceway (now Sonoma Raceway), Murphy rocketed down the strip, and after crossing the finish line at 258 mph, the hydrogen-peroxide-fueled rocket engine would not shut down, and when she deployed both parachutes, they ripped right off of the car. She went off the end of the track at approximately 300 mph, skillfully threaded the car through a narrow gate, then hit a hill and went airborne (she estimates 70 feet off the ground), then went end over end several times on landing. She suffered a broken neck but was lucky to escape with her life.

“I remember seeing sky and saying, ‘Oh no’ and a couple of expletives, but I was knocked out on landing,” she remembers, “but that was the end of really fast cars for me.” 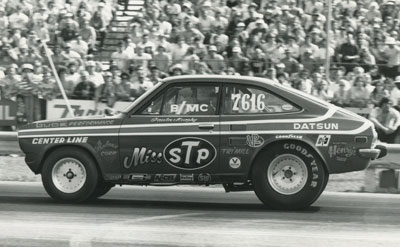 She continued competing – setting a record for an around-the-world drive – and returned to drag racing in 1976 with a B/Modified Compact Datsun and later a front-wheel-drive Z/Stock Honda Civic, having “a ball” touring around the country before retiring from racing. She was inducted into the International Drag Racing Hall of Fame in 1992.

“I got really, really lucky,” she said modestly. “I don’t think many people have gotten the opportunity to do some of the things that I did. I don’t look at myself as anything special; it was just the time for a woman to try to drive a Funny Car, and I felt rather proud that I was the one.”

Since Murphy opened the door, 13 other women (Woods, Muldowney, Carol Yenter, Rodalyn Knox, Susie Spencer, Paula Martin, Vicky Fanning, Cristen Powell, Ashley Force Hood, Melanie Troxel, Alexis DeJoria, Courtney Force, and Leah Pritchett) licensed with NHRA to compete in the class, and four of them (both Force sisters, plus Troxel and DeJoria) have won an NHRA national event in the class, including the biggest of them all, the Chevrolet Performance U.S. Nationals (Force Hood in 2009 and 2010 and DeJoria in 2014).

Force Hood, oldest daughter of class legend John, also recorded the highest female championship finish in class history, second, in 2009. Unlike in the three other NHRA Pro classes, a woman has never won a world championship in Funny Car, but sometime in the future, someone will, and she’ll have Paula Murphy, and the others who followed in her trailblazing path, to thank.