During the 50th anniversary Amalie Motor Oil NHRA Gatornationals, each of the Team JEGS entries will carry a unique throwback paint scheme of cars campaigned by family patriarch Jeg Coughlin Sr., was known as an individual who could drive (and win) in just about any race car.

Recent Arizona Nationals Pro Stock winner Jeg Coughlin Jr.’s JEGS.com/Elite Performance Camaro will carry a nostalgic paint scheme reminiscent of the Pro Stock cars campaigned by his father while brother Mike’s supercharged Top Dragster, meanwhile, will bear a striking resemblance to Jeg Sr.’s Top Fuel dragster from the 1970s and 1980s. In the Top Alcohol Dragster class, Troy Coughlin Jr. will compete in Gainesville with a retro look on his Rich McPhillips-owned dragster reminiscent of the Pro Comp entry raced by his grandfather in 1976.

During his long career, Jeg Sr. was known as an individual who could drive (and win) in just about any race car and he proved it when he stepped up to Pro Stock in 1972 with a Chevy Vega. Jeg Sr. later made the switch to a Ford Pinto for the 1973 season.

“Personally, running the Pro Stock scheme from the 70's is going to be really fun,” said Jeg Jr. “I can remember and still sense the smell from the enclosed ramp truck that it rode in. I recall the team, the nights in the shop and seeing the pictures and that's about it. Rocking the 70's JEGS logo, paint scheme and the throwback bell-bottom, want-a-be, fire suit will be epic!

“Also, watching Mike and Troy Jr. in the Division 3 championship trim from Top Fuel and Top Alcohol will be awesome. I was a couple years older at this point and remember quite a bit of those races, working on the cars, and the winner’s circle celebrations!”

Mike Coughlin’s supercharged Top Dragster will bear a striking resemblance to the Top Fuel dragster that his father raced during the late 1970s and early 1980s. 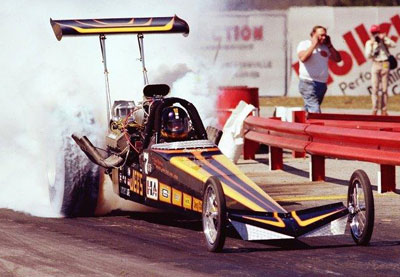 The JEGS Mail Order patriarch dominated the Top Fuel class in the North Central Division, winning titles in 1977, 1978 and 1980. During the 1978 season "The Captain" made the quickest run of his career with a 5.82-second elapsed time at Edgewater Sports Park in Cincinnati. A year later, Jeg Sr. qualified a career-best No. 2 at the Cajun Nationals in Baton Rouge, La., where he reached the semifinals.

“During the ‘70s and ‘80s there were several different chassis builders in Top Fuel, so you got to see a lot of different styles and ideas in their work,” remembered Mike. “This car was Dad's first ‘new’ car that he bought, in 1979 from Al Swindahl out of Tacoma, Wash. Within a few years, Al would become the top chassis builder in the nation. Dad, our family, and crew chief Ron Barrow did very well with this car, winning some races and setting top speed several times along the way. I am very honored to drive this car at the 50th Gatornationals to pay tribute to my dad.”

Comming off a successful debut season in the Top Alcohol Dragster class, Troy Coughlin Jr. will compete in Gainesville with a retro look on his Rich McPhillips-owned dragster. Coughlin’s nitro-burning A/Fuel dragster will pay homage to the Pro Comp entry raced by his grandfather in 1976. 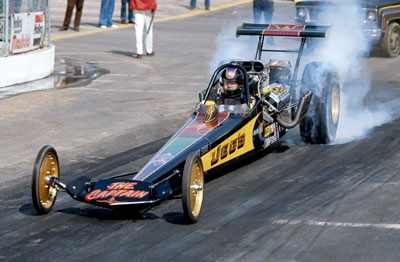 During the ’76 bicentennial year, no one was tougher in Pro Comp than Jeg Sr. He easily won the North Central Division title with a performance that included four wins in five final-round appearances at the divisional level. "The Captain" also reached the final round of national events in Montreal and Englishtown, N.J., that season. Riding the momentum built in 1976, Jeg Sr. made the bold move to Top Fuel in 1977 and continued his successful run with three Division 3 championships in four years.

“It’s an absolute honor to fly Pappy's colors,” said Troy Jr. “It really pays homage to his creativity and his passionate mindset for competition. It really shows just how fortunate we are to have been taught by Pappy and not just in racing, but in life lessons as well. I am going to give my best effort in each lap to bring Pappy and the McPhillips boys a Wally! Big thanks to Woody [Scott Woodruff] for all his hard work and putting all this together and making this tribute as awesome as it is!”