The story of the first Gatornationals Top Fuel win, from the inside

Dave Chenevert was the first Gatornationals Top Fuel winner way back in 1970 and the first of 30 different drivers to win Top Fuel at Gainesville Raceway. Relive that wild weekend from the memory of one of his teenage crewmembers, Fred Mooneyham, himself a future Top Fuel driver.
22 Mar 2019
Phil Burgess, NHRA National Dragster Editor
DRAGSTER Insider 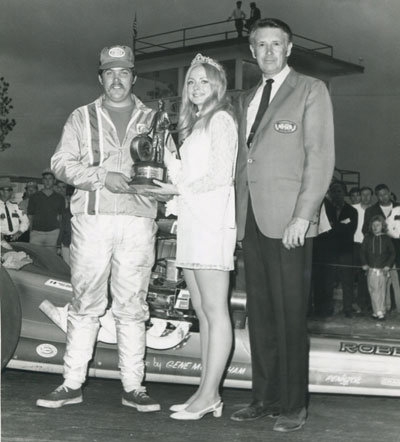 With his back-to-back victories at the 2018 and ’19 events, Richie Crampton became the 49th and 50th Top Fuel winners in Gatornationals history, but does anyone remember the first?

Former Top Fuel driver Fred Mooneyham does, because he was part of the crew when Dave Chenevert defeated Jim Paoli to win the 1970 Gatornationals to become the first of 30 different drivers to win Top Fuel at Gainesville Raceway.

For whatever reason, people don’t remember how good Chenevert was in that a one-year span. At the wheel of the Shreve Automotive dragster he won the Division 2 championship in 1969 and came within one round of winning the 1969 world championship, losing to Steve Carbone in the final round of the World Finals at Dallas Int’l Motor Speedway. He partnered up with Gene Mooneyham for the 1970 season and together they won the Gatornationals.

But Phil, I can hear you saying, that's Chenevert driving the Robert Anderson dragster in the first photo, not the Mooneyham car. What the heck? Glad you asked, because there's a story behind the story (there always is). 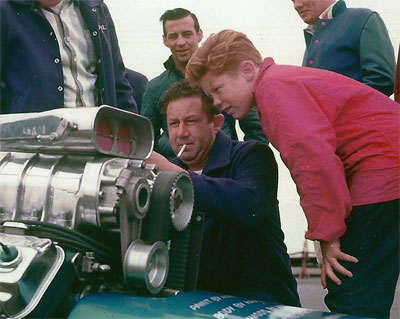 The Mooneyham family had recently returned to its Louisiana homestate after a number of years in California where Gene was the head engine builder for Keith Black. At right is a sweet photo of young Fred,  who was featured in my Teen Terrors of the ’70 thread a few years ago in this column, paying very close attention to what his dad was doing in those halcyon SoCal days. Back in Louisiana, Gene ran Car Shop Inc., an all-around high-performance/engine-building business in New Orleans.

But as fate would have it, just before the Gatornationals, the chassis of the Mooneyhams' very quick dragster had been damaged in a forklift accident in the shop and had been sent back to Woody Gilmore's California shop for repairs. Enter Robert Anderson, who also owned a Top Fueler that Mooneyham had built for him.

“My dad was a very likable guy and we met Robert Anderson at a social gathering that involved raw oysters and Southern Comfort," recalls Fred. "Robert started coming around Car Shop and then wanted to sponsor our race car. On the cowl we had RARE Inc. (Robert Anderson Racing Enterprises) on it as a bit of a joke as Robert had a great personality. Robert was a young rich guy in his 30s living off a family trust, and rarely went with us to the races. On that [Gatornationals] weekend he was a patrol volunteer for the local police department and couldn’t come, so he let us take his car. My dad, my brother [Gene Jr.], and I were the total crew and we took our engine with us."

(Ronnie Martin had driven Anderson's car at the Winternationals, and it's not clear why he wasn't the driver at the Gatornationals other than that maybe the Mooneyhams wanted their own driver; Fred can't remember the details. Martin, also a transplanted Californian, resumed driving the Anderson car later that year and delivered the world championship to Anderson by winning the 1970 Finals by beating John Wiebe in the final at DIMS.) 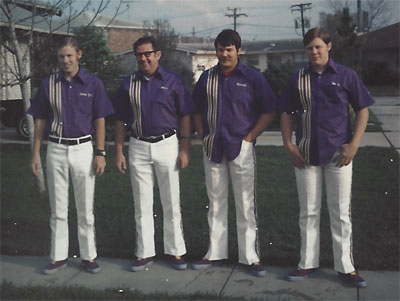 “I was 15 and in high school and worked at the shop after school," the story continues, "We couldn’t take much time off, so we would leave on Friday after work and usually drive straight through to the races (depending on the distance). As soon as the races were over, we loaded up and again drove straight through to get back to work on Monday. At right is a photo of our team as we prepared to head out for Gainesville. That's me at far right, next to Dave Chenevert with my dad and my brother on the left.

“Gainesville was only about an eight-hour drive, so we left Friday after work. We had our Oldsmobile 98 push car and our makeshift truck and trailer combo. When we went through Mississippi, we ran into a very severe fog bank that went on for a couple of hours as we were traveling really slow. The car hauler was ahead of us and we were in the tow car. A friend of ours, Skippy, was driving, dad was in the passenger seat, and I was in the back. I distinctly remember that dad had his head out the window, and I was behind the driver with my head out the opposite side. We were looking down to find the lines on the road so we could guide Skippy to stay on the road. Every now and then we would lose the lines and find us driving off the shoulder of the road. The scary part was that we could hear 18 wheelers coming and we couldn’t see them until they were almost right next to us.  I remember hearing some truck go past us that we never saw. It was a long night as we were only going about 10 mph for a long time. We made it through the fog bank and then caught back up to the car hauler. We later ran through a pack of wild dogs in a valley in northern Florida that ran us off into a ditch.”

Once the team finally arrived safely at Gainesville Raceway for Florida’s biggest drag race, where Florida’s favorite son, “Big Daddy” Don Garlits was, naturally, heavily favored. By this time in his career, Garlits had already won five events, including three times at Indy, and was the class; undisputed king and, as he told me a few weeks ago, he really wanted to win his homestate event. 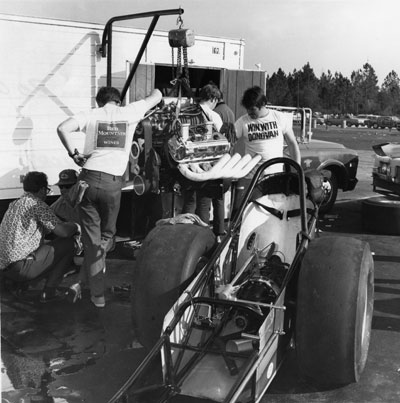 “That’s our pit in the photo at right,” said Mooneyham. “Dave Chenevert is the one standing by the motor in the Donovan t-shirt, I’m right behind him with my back turned, my brother is behind me looking in the truck, my dad is on the ground with his Pennzoil hat on (I’m not sure who is with him in the dress shirt). I think Skippy is the one in front of the motor. I’m pretty sure that this is after qualifying; we had a clutch issue and that’s why the car was apart.  The truck is our hauler that we built at our shop, and if you look to the right you can see our Olds 98, with the front nose of the dragster sitting on our tow car. That was our total rig; not many spares!”

Garlits ran 6.56 in round one to beat Cliff Smith and the Shreve Automotive entry when everyone else was in the .70s and .80s, then “Big Daddy” blasted out low e.t. with a 6.50 in round two to bury Tom Chastang’s Wheeler Dealer. Chenevert, meanwhile, had advanced on red-lights by Ron Colson and future (1972) Top Fuel world champ Jim Walther; his times weren’t mentioned in the National Dragster coverage, but my guess is they were nowhere close to Garlits. Chenevert advanced to the final with a 7.79 over Ron Potter, who had upset No. 2 qualifier Davis and “Starvin’ Marvin” Schwartz in the first two rounds.

In the other semifinal, as the photo above attests, Garlits was long gone on Paoli’s Yankee Packrat dragster (ironically built in Garlits’ chassis shop), but Garlits broke the transmission. The Gatornationals back then was held in mid-February and the broken transmission was an ugly portend to what would happen to “Big Daddy” when the transmission broke again at Lions Drag Strip a few weeks later, on March 8, forever changing his life and the face of Top Fuel.

Chenevert, who never won another NHRA Top Fuel title or even got back to the final, won the race on his starting-line prowess, leaving on Paoli and winning on a holeshot, 6.74 to 6.61, with the Mooneyham-brewed horsepower carrying the car to top speed of the event, 231.95 mph.

“It was a really great time, because Garlits was so heavily favored, and our low-budget New Orleans team won,” said Mooneyham. “Robert didn’t even know we won until we got home (no cell phones). The prize money was $1,000, and Robert gave it to my dad and David got his percentage. I remember my mom being really happy when we arrived home as that was a lot of money.

“My fondest memory was my brother and I riding on the hood of the yellow Oldsmobile as my dad drove down the track, back to the starting line pushing the car with David on the roll bar after the final-round win. It was certainly a simpler time of Top Fuel racing. 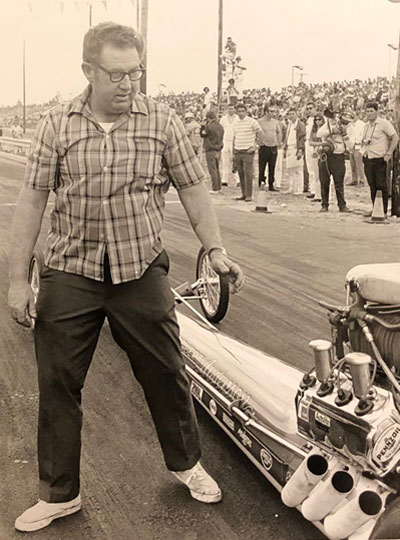 “My dad [pictured right] went on to be the best blower builder in the sport, and built a very successful business. David drove for us for a while; he was a good guy but made a wrong turn in his life, so when he had his issues, I got my Top Fuel license in 1971 at LaPlace Dragway in New Orleans and, as you know, was the world’s fastest teenager there for a while.

“My brother went on to travel as the mechanic for Steve Carbone and won the [1971] Indy race against Garlits in the final round in what became the famous burndown. It was his idea to try this tactic as Garlits was heavily favored. My brother made sure and chilled the motor, even putting ice in the block, as they thought that was their only chance was to upset Garlits. It worked, and he called us that night from Indy to tell us the story.

“Great memories like this as a young boy last a lifetime and I hope the memories of my wonderful father as an NHRA lifetime achievement honoree are always remembered. He was a very fine man -- the finest man I ever knew -- and from the turnout that came to his funeral, it's obvious that I'm not the only who felt that way.”