Let’s continue our journey through the decades with another batch of images from the Ron Lewis collection. Over the past month or so, I’ve shared photos from his five-decade collection covering the 1960s and ‘70s (Top Fuel and Funny Car) and now we’re on to 1980s Top Fuelers.
14 Dec 2018
Phil Burgess, NHRA National Dragster Editor
DRAGSTER Insider

Let’s continue our journey through the decades with another batch of images from the Ron Lewis collection. Over the past month or so, I’ve shared photos from his five-decade collection covering the 1960s and ‘70s (Top Fuel and Funny Car) and now we’re on to 1980s Top Fuelers. As big a fan as I am of the 1970s, the 1980s was a pretty interesting era in Top Fuel, from the Larry Minor superteam to the emergence of Joe Amato and a return to aerodynamic matters and comebacks by Top Fuel legends “Big Daddy” Don Garlits, Shirley Muldowney, Gary Ormsby, and Eddie Hill. It was an interesting decade.

From a selection of more than 100 photos, I homed in on the following 14 as talking points. As with the previous installments, it’s not intended to be a historical look back at the era as much as a chance for me to make observation and tell stories about the subjects. Hey, it’s my column, right? 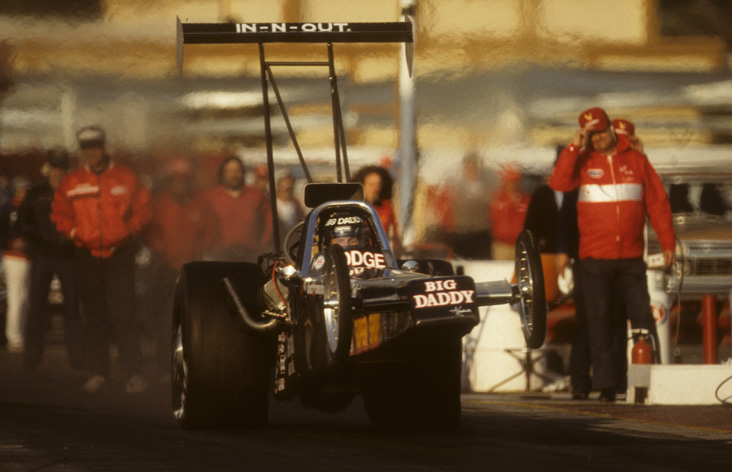 Garlits followed his comeback and signature win at the 1984 U.S. Nationals by shelving the outdated Swamp Rat 26 (built in 1981) and, with the late Herb Parks, building Swamp Rat 29. (Swamp Rat 27 was the sidewinder and SR 28 was the equally short-lived turbine car, both built in 1983) for the 1985 season. SR29 made its debut in spectacular and memorable-for-the-wrong-reasons fashion at the pre-season event at Firebird Int’l Raceway in Phoenix where he beat Gary Beck in a two-of-three match race. At the conclusion of the third and final round, the wing struts on Gar’s new digger –- which he admitted afterwards used tubing that was too thin -- collapsed, sending him tumbling down the top end.

Fortunately, Garlits was not injured and stopped off at nitro veteran Johnny West’s nearby shop to seek help repairing the car and building new wing struts in time for the Winternationals. West was not home but Garlits convinced his mom that Johnny would be OK with his good friend Don Garlits using his shop. It was locked, Johnny had the key, but Garlits apparently had a big enough hammer to “break in” and get the job done. They made it to Pomona where he fought wheelstand problems like this and eventually qualified and reached the semifinals before losing to Joe Amato. Garlits, who had seldom been on his head in the first 30 years of his career, crashed again in 1986 (the famous Englishtown blowover in SR XXX) and ’87 (the less-famous Spokane blowover on just the sixth run in SR 31). 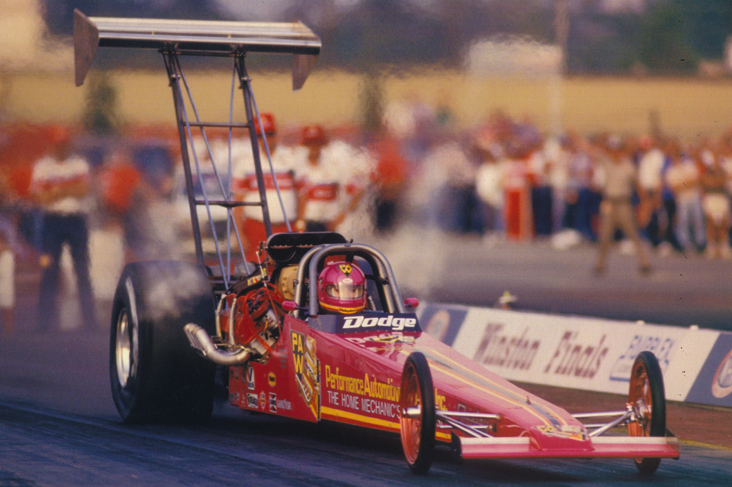 Muldowney also made an extremely impressive comeback, returning to action in early 1986, just 18 months after a terrifying June 1984 crash in Montreal that left her with major injuries to her legs and put her career in jeopardy. The comeback car was, of course, pink and featured cool little sideview mirrors (both her and Garlits liked having them, presumably as a way to look at the rear tires and engine). Her comeback victory was a little longer in coming, but she finally did reach the winner’s circle again at the 1989 Phoenix event for her 18th and final victory. 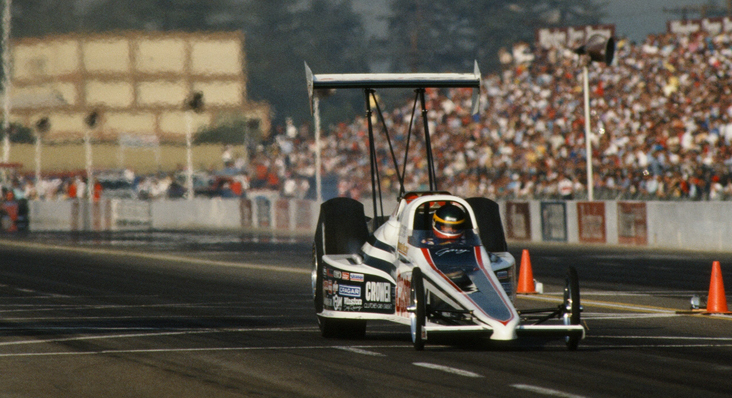 Gary Ormsby, a prolific Top Fuel racer in the 1970s, sat out almost three seasons before returning to the class in 1983 with an unexpected victory at the Popular Hot Rodding Championships and won the 1989 Top Fuel championship, but is perhaps best remembered for fielding the ambitious Castrol GTX streamliner in 1986. This great pic shows G.O. in the lights at Pomona which assuredly is from the World Finals because we all remember that an ignition backfire on its first burnout at the Winternationals blew the top of the body off. The body was repaired (and raced Garlits in the final round of the only all-streamliner Top Fuel final at that year’s Cajun Nationals) but the car proved too heavy to be successful, not uncommon for the breed [check out this past Insider column about the great streamliner revolution of 1986]. 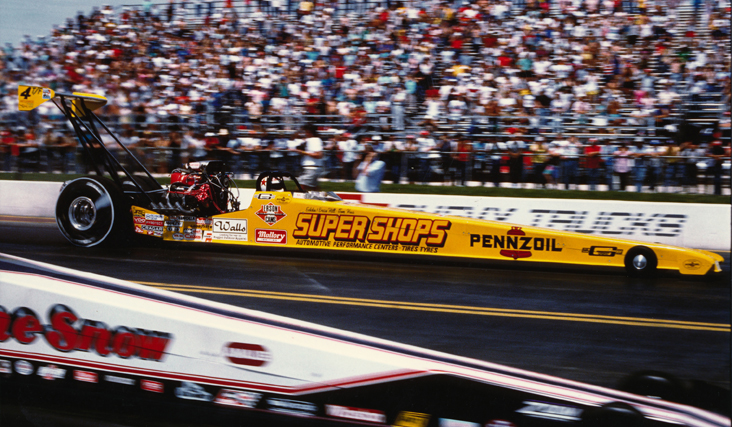 Eddie Hill sat out even longer than Ormsby. Hill was a star in Top Fuel in the 1960s and retired in 1966. He came back to racing -– albeit it in a drag boat -– in 1974 and was a superstar there, too. He returned to the asphalt wars in 1985 and quickly became a force and, eventually, a world champion. His signature moment was the breaking of the four-second barrier at an IHRA event at Texas Motorplex in April 1988; this is the actual run, with fellow Texan Gene Snow –- who later that year in Houston would make the first official four-second run in NHRA competition –- in the near lane. 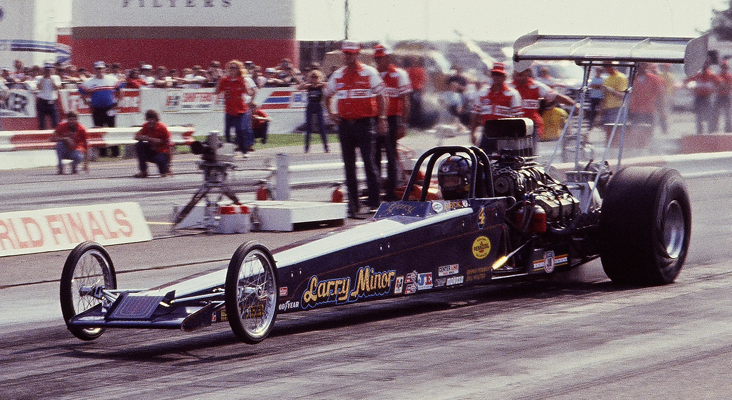 Gary Beck and the Larry Minor dragster went on a reign of terror in the early 1980s with their feared blue dragster, which was one of the first to benefit from Sid Waterman’s “Big Red” fuel pump. Tuned by Bernie Fedderly, the car made the first 5.4-second quarter-mile pass at Indy in 1982, then ran 17 of the 18 quickest passes of 1983, including another barrier-breaking pass, a 5.39 in Fremont, which he duplicated two weeks later at the World Finals at Orange County Int’l Raceway (pictured). 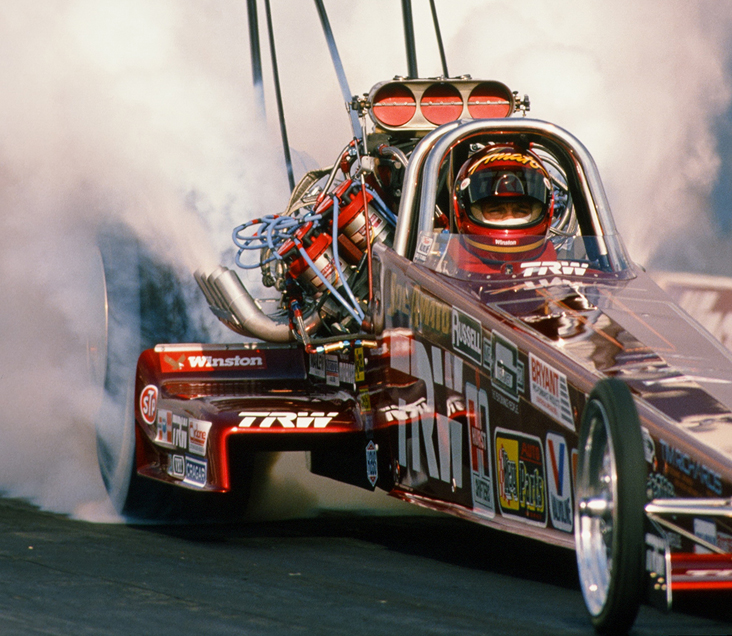 Joe Amato and crew chief Tim Richards revolutionized Top Fuel racing in 1984 with the first tall, laid-back rear wing but they didn’t stop there, also experimenting a few years later with ground effects pods. This is Pomona in early testing with the rear wing still in place, but they finally bit the bullet and made a run in Houston with no rear wing. I was there and remember the run looking impossibly sketchy, and apparently the team agreed as I don’t remember seeing the car run in that configuration again. 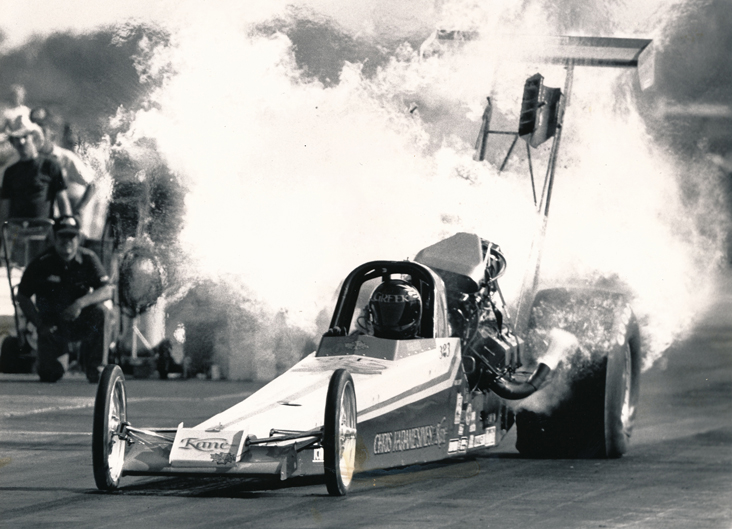 Here’s Karamesines in a less memorable pose, blowing the supercharger to smithereens in the Karamesines & Kane dragster. Everyone knew who the Karamesines was but it wasn’t until he’d been running the car for a few months that “the Greek” revealed that "co-owner" Kane was the first name of the young son of his longtime friend and fellow Midwest racer John Loukas. 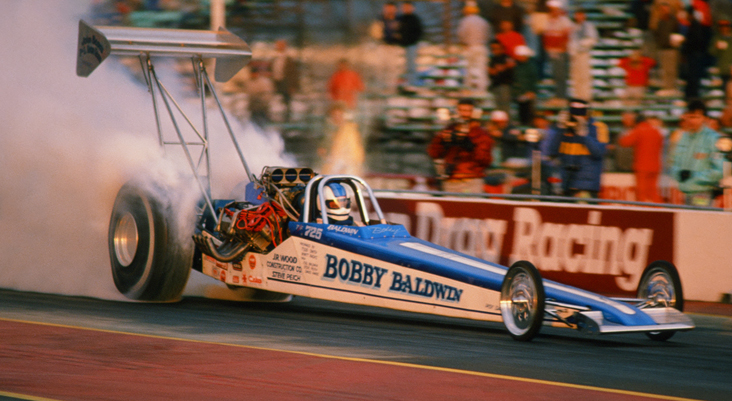 Speaking of Karamesines, he’ll always be linked in my memory to SoCal Top Fuel favorite Bobby Baldwin, who married “the Greek’s” daughter, Paula, and together gave us their daughter, Krista Baldwin, who’s upholding the family legacy as she races in a very competitive Top Alcohol Dragster while working at McLeod where he does marketing for the company and her boss, Funny Car racer Paul Lee. Baldwin was a Pomona treasure who went from being a fan in the stands –- he attended every Winternationals beginning in 1965, when he was 10 -- to the guy helping set up the sand trap and driving the water truck (from his own grading business) that wet the Fairplex ground to prevent dust, to driving a Top Fueler. Baldwin had some of his greatest days at Pomona Raceway -– fitting because the Pomona parking lot was built on land once owned by his great-grandfather -- including his first four-second pass there in 1992 and a semifinal finish at the Winternationals in 2001. We lost Bobby to a brain aneurysm in September 2001, but I see him every time Krista makes a run. (And, for the record, that’s our late, great Photo Editor, Leslie Lovett, in the background in the blue and yellow jacket. Miss him, too!) 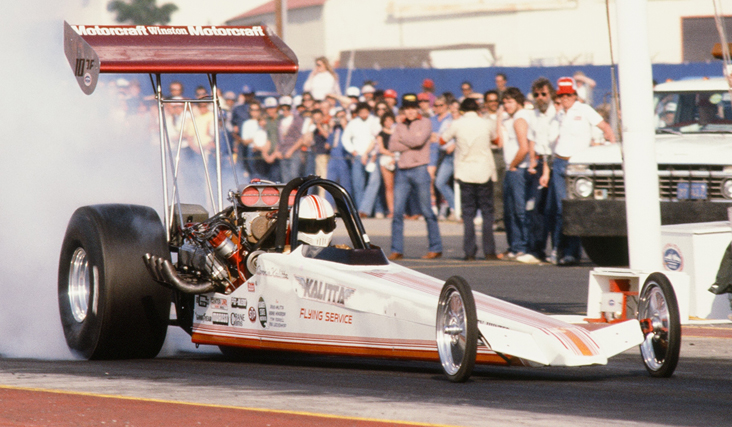 After racing in the Alcohol Dragster class, the late, great Scott Kalitta finished in the Top Fuel Top 10 in his first season, in 1983, with this car. He switched to Funny Car late in 1984 and won his first national event in Houston in 1989. No one would could have guess that when he switched back to Top Fuel in the early 1990s that he would go on to win back-to-back championships in 1994-95 with Dick LaHaie tuning. 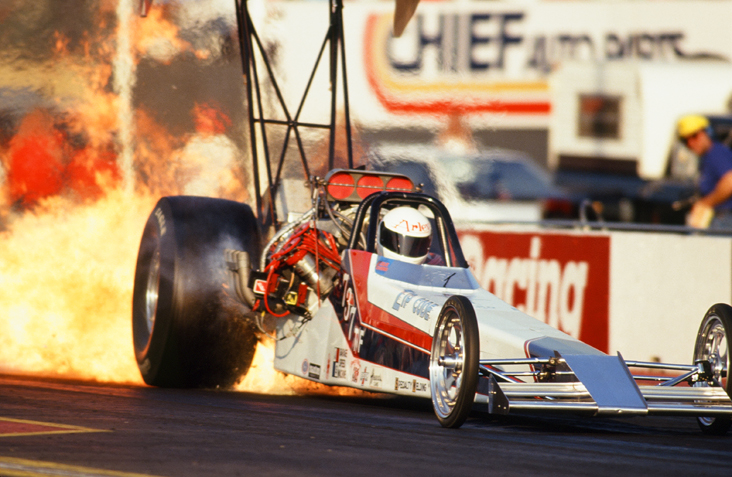 Arley Langlo was the low-buck Top Fueler we always cheered for in the 1980s, as his and partner Jay Roach’s Zip Code dragster battled it out – usually at just the Pomona events – against the big guns. All too often his runs in those early days ended up in calamity but they hung tough, which made us love them even more. In a poetic paean to the team, wordsmith Cole Coonce wrote of them in an article titled “Who’s afraid of Arley Langlo?” in the September 1995 issue of Super Stock & Drag Illustrated, “A ramshackle trailer, a 10-year-old short wheelbased Top Fueler, an anti-matter black 1967 Dodge camper, and a race crew whose uniform consists of straw cowboy hats and stark-white coffee-stained t-shirts, which define their existence, at least tangibly.” The team, bless them, continued to run Top Fuel through the middle 2000s and I heard at one point they were building a dry-lakes streamliner. Roach died in January 2012.

Fabled Southern California race starter Larry Sutton had a long history of racing in Top Fuel and Alcohol Dragster when he signed on to drive the new Whitmore & Reed dragster in 1987, which was the first half of a Top Fuel and Funny Car team put together by Tommy Whitmore, Eric Reed, and Greg Badger. On this qualifying pass at the 1987 March Meet, the throttle hung open backing up from the burnout but Sutton deftly saved it. He rebounded to not only qualify No. 1 but reach the final, where he red-lighted to March Meet king Don Garlits. Two years later, Reed would create a shockwave in the sport with a Funny Car runner-up behind Mike Dunn at the 1989 Southern Nationals. 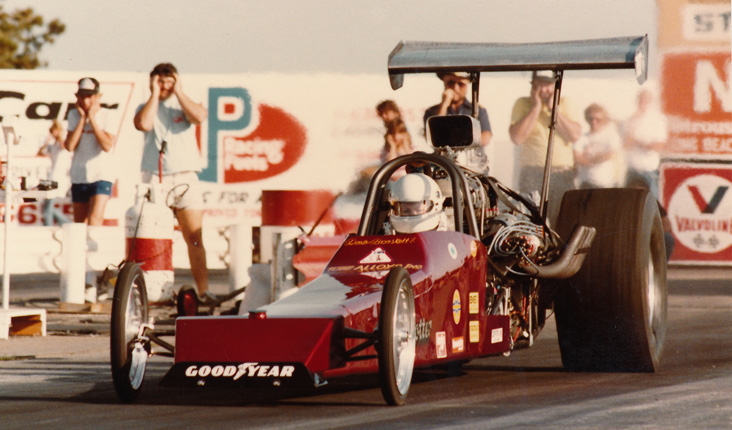 One of the most intriguing cars of the early 1980s was the McGee brothers’ entry, which was powered by their 32-valve quad-cam nitro engine, which had been under development since the mid-1970s (nice history of the engine here). The car, tuned by Chris and Phil McGee, had a number of drivers over the years, including David Grubnic, Robert Reehl, and the aforementioned Gary Beck, who probably had the car’s best outings in the late 1980s. The engine showed a ton of potential –- so much so that even Dale Armstrong bought one for possible use in Kenny Bernstein’s Budweiser King –- before it and other similar engines were outlawed by NHRA in 1997 after nitro racers (notable exceptions: Bernstein and Jim Head) launched a petition. The cowl on the car in this photo, which I believe is from 1983, says Dave Braskett but I think (based on enlarging the pic and peeking inside the helmet) it’s actually Sue Ransom, a multi-discipline racer and stuntperson from Australia. Chris McGee’s daughter, Kaitlyn, carries on the family name in Jr. Dragster competition today.

OK, gang. That’s it for 1980s Top Fuelers. Thanks again to Ron Lewis for the use of his images. I hope you enjoyed this trip back in time.