Top Fuelers of the '70s: The evolution

Five decades of refinement has brought the design of the modern-day Top Fueler to a knifepoint of precision. Today’s Top Fuel dragsters are mission-proven works of art; you know this because they all basically look and work alike. Oh sure, there are subtle tricks that lie under the body panels and inside the beating hearts of the nitromethane-burning powerplants and in the brains of the control boxes, but lined up side by side with their skins removed, they’d probably look like a row of identical skeletons hanging in the window of the Halloween store. That’s not a knock, just an observation.

Back the 1970s, it was an entirely different tale. The box was wide open for experimentation and we saw it. The switch from front-engined slingshots dragsters to rear-engined cars. The adaption and advancements in aero experimentation, from wings to enclosed cockpits. The 1970s had it all, and veteran photographer Ron Lewis was there to capture it, which I present this week in Part 2 of a multi-part visit through our past as seen through the lenses of his cameras.

Last week I gave you a mix of 1960s action, but after drooling over more than 800 of his 1970s photos for hours, and noticing the progression of the class on display, I decided to break the ‘70s into two parts, with fuel dragsters this week and Funny Cars next, with perhaps a dash of Pro Stock and fuel altereds.

The design of the 1970s slingshot had not changed much from the preceding decade, as evidenced by this shot of “Big Daddy” Don Garlits beating Herm Petersen in the first round at the 1970 Supernationals at Ontario Motor Speedway. There’s a lot going to say about this photo (starting with: check out the toe-in on the front wheels!) because of its historic impact on Garlits’ career.

Garlits, of course, was still recovering from having half of his right foot severed in the infamous March starting-line transmission explosion at Lions and already had the game-changing Swamp Rat 14 on the jig in Florida but had resumed driving again earlier that year at an AHRA event in Bristol. The car was the same unlucky Swamp Rat 13 from the accident, repaired and sold by Garlits to his right-hand man, T.C. Lemons, who had hired Connie Swingle to drive it before a frustrated Garlits (who in the meantime had hired fellow Floridiana Marvin Schwartz to repainted his car in “Big Daddy” colors to fulfill Garlits' bookings) climbed back behind the wheel for the first (and only) time as a hired driver (for 40 percent of the gross). After beating Petersen in Ontario, he got by red-lighting John Wiebe in what would be his final NHRA round win in a front-engined car. He lost to Danny Ongais in the next round them of course, unveiled SR14 with his win at Pomona in 1971. 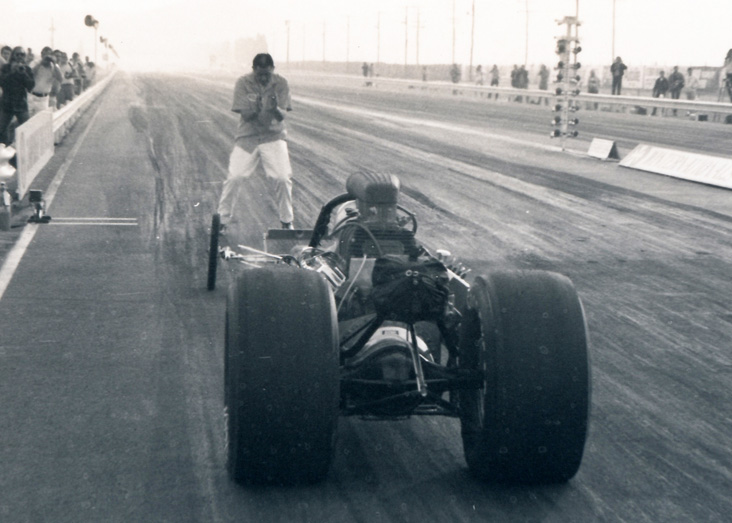 Speaking of Swamp Rat 14, here it is being lined up for one of its early runs in Pomona. The car did not yet have a rear wing -– common in all of the rear-engined predecessors –- which was added in April and immediately made the car two-tenths quicker and 15 mph faster. 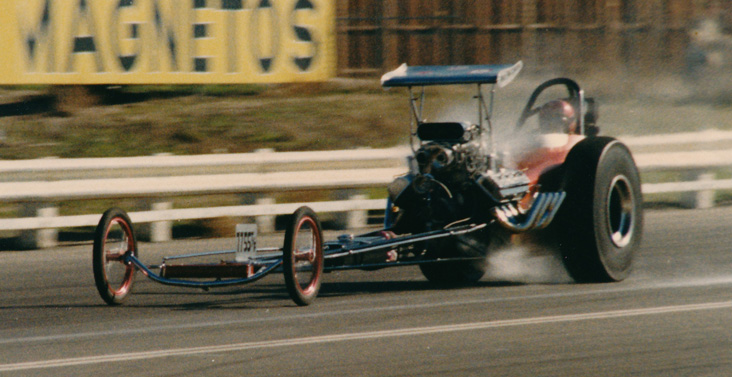 Even though Garlits’ car did not have a rear wing, even front-engined cars were trying to use aero downforce to improve traction. (Garlits had been one of the first with Swamp Rat 5 in 1963.) Here’s Roger Gates in the Cracklin’ Rose of Sonny Diaz and Ralph Wagner going through the traps at Orange County Int’l Raceway circa 1971 and oiling his goggles in the process. 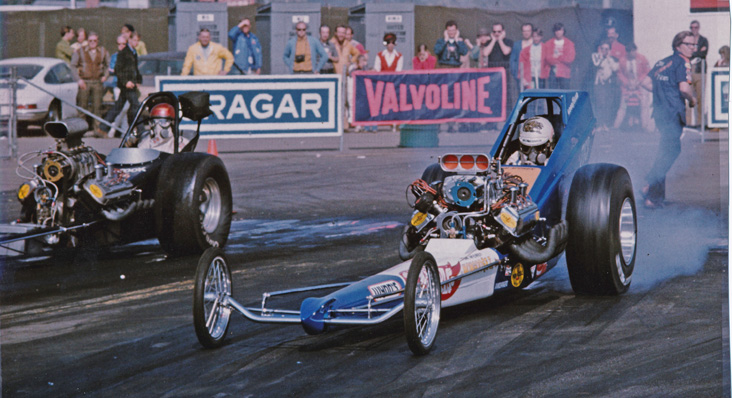 As Garlits was in the process of revolutionizing the class at the 1971 Winternationals, Hot Wheels teammates Tom McEwen and Don Prudhomme were not only still in the front-engine mode but were saddled with a pair of ungainly cars with bodies designed by Mattel to fit the new Hot Wheels Wild Wheelie set. Here’s “the Mongoose” in the bleach box at Pomona alongside Don Cook’s more conventional slingshot. McEwen beat Cook but then lost fire in round two against Jim Dunn, who had made the field as an alternate for Pete Robinson, who had been killed in a qualifying accident the previous day. 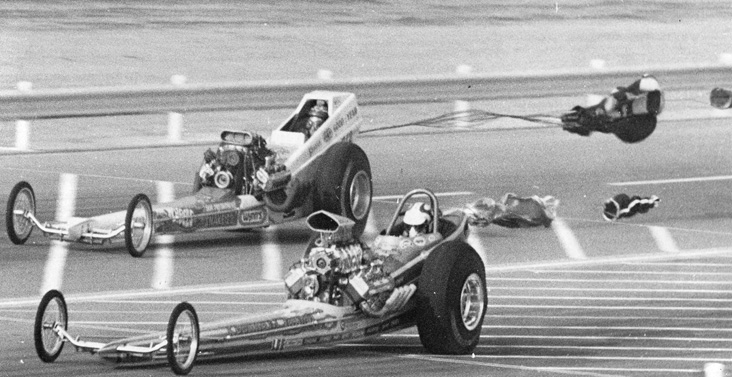 And here’s “the Snake” getting routed by Rick Ramsey and the Keeling & Clayton California Charger machine in round one. By Bakersfield a month later, Prudhomme had ditched a lot of the bodywork as he would from time to time when the need for performance outweighed the need for appearance. 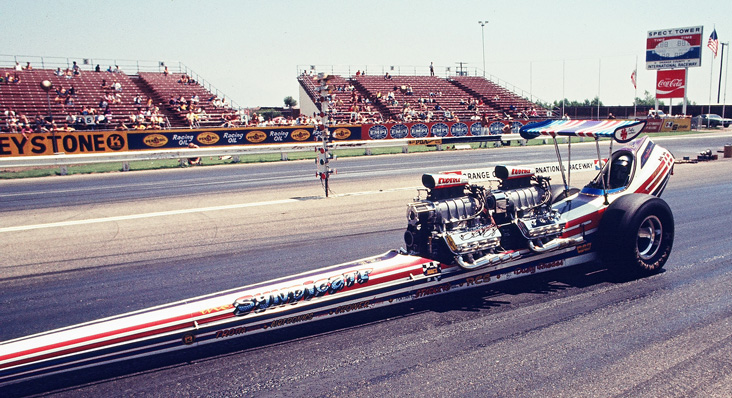 In an effort to stay true to its front-motor roots and compete with the growing onslaught of rear-motored cars, the Syndicate team of Al Forthmann, Jack Raitt, driver Phil Ditmar, and Butch Butorac had Frank Huszar at Race Car Specialties craft this gem, one of the few (and certainly the last) twin-engined Top Fueler. The car only ran about one season and was never truly competitive before being retired after the 1972 Winternationals. It was recreated in the early 2000s and was a popular site at Cacklefest shows.

As rear wings bean to sprout on the rear-engined cars, there was a wide assortment of ideas about how to mount the wings. Here’s just a few: 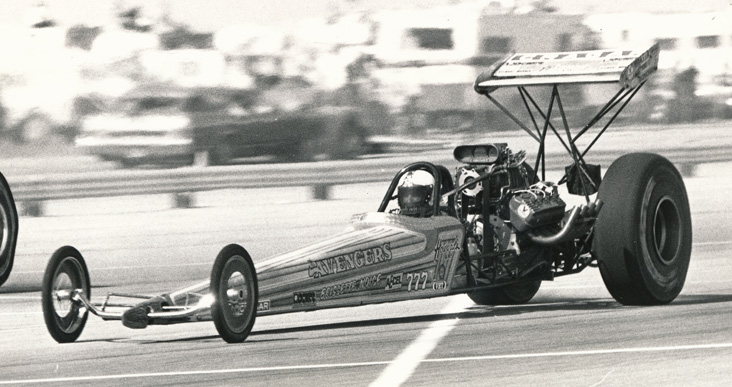 Bob Noice and the Jim Brissette-tuned Avengers dragster, shown at speed in Bakersfield, went with the “more is better” approach in wing strut volume. 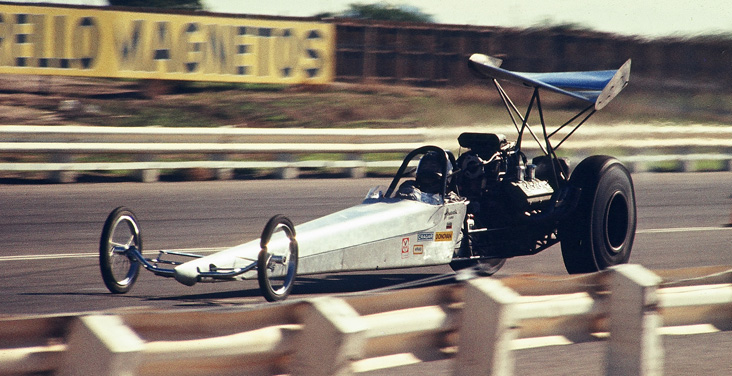 Without paint, there’s no way of knowing whose car this is, but the wing struts and the car do look a lot like the Avengers car above. The wing is different -– thinner and only a single element –- the vale covers and cowl are different, but maybe this is the before of the better after version? Either way, that wing is in a world of hurt. So much to learn! 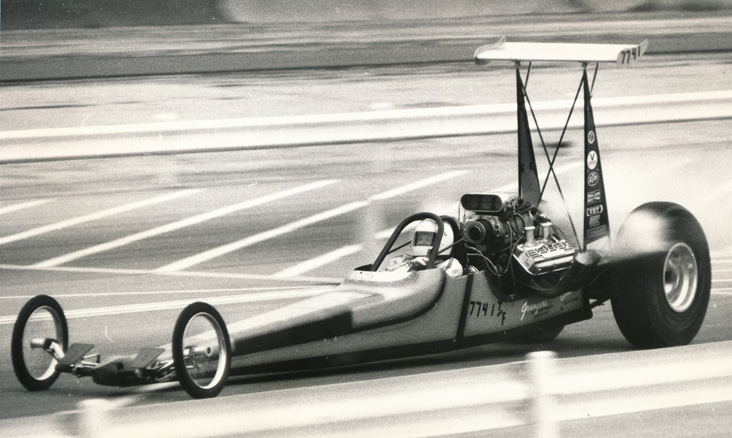 Denny Fitt, maybe decades ahead of the crowd, went for a smaller wing on taller struts. It’s not exactly Amato-esque in layback and strut design, but it certainly was eye-catching.

Jim Gordon had the market covered on wings, with one on the nose, some side-mounted canards, and one on the back. I’m no engineer but I think that the wing struts might have needed to be spread a little further apart where they attached to the rear wing.

Don Long went a an entirely different route with the dragster he built for Wes Cerny and Don Moody, which featured a T-tail rear stabilizer, a fin mounted vertically between the rear wheels with small canard wings near the top on each side; one might easily conclude that Long’s wing was the predecessor for the “monowing” like the one Don Garlits would make famous with his later Swamp Rats. Cerny and Moody got the car just before the 1971 Supernationals, where they failed to qualify. The next year, with a more conventional wing, the team made a stunning 5.91-second pass at the Supernationals not long after Mike Sniveley had broken the five-second barrier with a 5.97.

Long explained the premise to me in a column a few years ago: “The idea was rooted in the poor overall record of REDs at the time, and a nature law of stability -- separation between the center of gravity and the center of pressure (like an arrow and parachute). In layman’s terms, for horizontal stability, one wants the weight in front and the drag in back, and the tail (or rudder) is somewhat of a ‘stability on demand’ answer. It was an idea ahead of its time.” 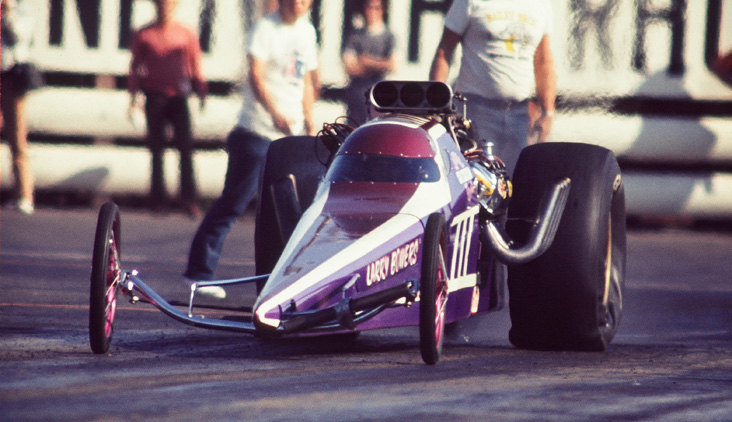 Speaking of ahead of its time … It certainly wasn’t the first fully-enclosed cockpit on a fuel dragster, but supercharged manufacturer Larry Bowers’ sleek machine may have been the first for a rear-engined car when it debuted in 1972, more than 40 years before Tony Schumacher had one on the U.S. Army dragster. The purple wonder debuted sans wing as shown here, but quickly added one, as shown when it made the cover of the August 1972 issue of Drag Racing USA magazine.

The Lisa & Rossi wedge – -known to many as “the Flying Doorstop” -– went a whole other route, too. Built by Roy Fjastad at SPE, originally for Fred Farndon, the car was sold to Vince Rossi and Tommy Lisa before it was completed. The design did show some merits. Billy Tidwell set the national speed record in the car in July 1972 at Lions at 239.64 mph, and Danny Ongais, shown at the wheel here in Bakersfield, bettered it to 243.24 later that year at the Supernationals at Ontario Motor Speedway for the first 240-plus-mph national record. Jack Martin also drove the car in 1974. A few years ago, I wrote a whole column about the car, which you can read here.

Front-wheel pants were another aero experiment in the 1970s –- or rather the rebirth of a trend from the mid-1960s -- and best epitomized on the gorgeous California Charger. After a number of accidents with fairing-wearing dragsters, NHRA outlawed them beginning with the 1977 season. Here’s a column on the whole 1970s wheel pants phenomenon.

Here’s another Exhibit A on why Top Fuel drivers loved the rear-engined car. That’s quite some fireball chasing Gaines Markley down the track at Ontario Motor Speedway. I’m pretty sure this was the 1974 Supernationals, a year after a blower explosion shredded the rear tires on a winning semifinal run, causing Markley to roll several times and giving Garlits a bye in the final round. 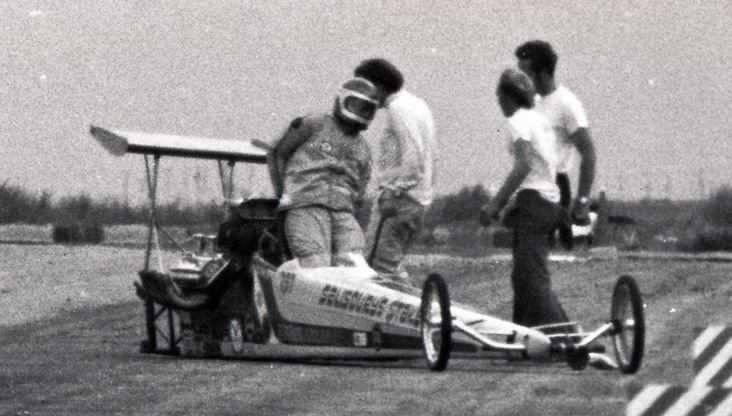 And here’s Exhibit B, with Dwight Salisbury exiting his car after losing the entire rear-end assembly at Bakersfield. In the old days, the driver might well have gone with the rear end. Salisbury encountered severe tire shake on a run and the bolts holding the rear end housing in the chassis sheared. When he applied the brakes just prior to the turn-off, the whole rear end assembly ripped off the car and got tangled in the parachute and it passed him on the left as he ground to a halt.

OK, and because Top Fuel in the 1970s was very much about Don Garlits (and because, sadly, there were no Shirley Muldowney pics in this group of photos), here’s a couple more “Big Daddy” shots to round us out.

Classic Orange County Int’l Raceway nighttime photo of Garlits. The pipes are cackling evenly and you can see the staging light reflecting off the front wheel and the starter’s hand poised on the switch. It’s go time!

This one has quite a story. It’s Swamp Rat 24, at the 1978 Winternationals. Unfortunately this is a black and white photo so you can’t tell that the car was blue and white and not black and white (that would have required a blue and white photo; we don’t have those). Garlits painted the car blue as part of a $50,000 sponsorship he had gotten from the Navy to replace longtime backer Wynn’s. Garlits also had painted a cross on the cowl, with the words “God is love” on it. According to Garlits, in his book Don Garlits and his Cars, “the Navy was unhappy; they wanted the cross removed at once or moved into the cockpit where it couldn’t be seen by cameras. I wouldn’t comply, and the Navy withdrew the sponsorship … I’m a Christian and I figured God would work it out – and did God ever!” This was Garlits’ first year with Herb Parks as crew chief and over the next two years they won a reported 24 of 30 NHRA/AHRA/IHRA events they attended.

OK, gang, thanks again to Ron for the pics and to you all for following along on what was a very interesting decade of Top Fuel racing. I’ll be in Las Vegas by the time you read this, but will answer all emails when I get a chance, then come back next week with Lewis’ 1970s Funny Cars collection.