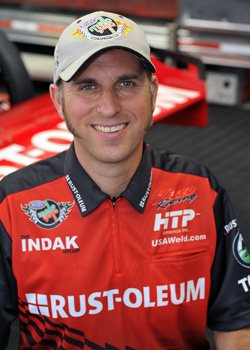 A long but busy offseason for TJ Zizzo has the driver of the Rust-Oleum Top Fuel dragster ready to make his 2016 debut at the K&N Filters Route 66 NHRA Nationals at Route 66 Raceway in Chicago.

“It’s my home race,” said the Lincolnshire, Ill., resident. “We’re excited, for sure. I’m excited to go. We have Rust-Oleum with us. It’s all good. It will be neat to compete against these guys again.”

Zizzo and his team led by crew chief Mike Kern have been working hard to not only improve their performance but also to minimize the chances of oildowns. They tested their dragster at Route 66 Raceway in preparation for the season.

“We went testing and got a lot of help from a lot of valuable people,” said Zizzo. “We outqualified some good cars last year, but it was disheartening blowing stuff up every third run. The team has spent a lot of time in the shop this offseason. We’ll keep plugging away.

“Some of the things we did include making a bigger, better oil pan, using fireproof paint on items in the back of the car we don’t want to burn through, buying some special fireproof absorbent, changing procedures on our car like the way we bolt the cylinder heads on the motor, making a bigger fuel tank, changing our fuel pump and fuel system, getting some help from other teams, and changing the way we drive and tune it. We have more and better parts and pieces than we did since 2007, and we want to be nice to them and take them along for the ride.”

Following the Chicago event, Zizzo is heading west to the Toyota NHRA Sonoma Nationals and the Protect the Harvest NHRA Northwest Nationals presented by Lucas Oil in an effort to showcase his sponsors with the FOX network’s live NHRA coverage during the Western Swing.

“TV is rolling,” said Zizzo. “I hear these good, positive vibes. We are putting our eggs in a basket for Rust-Oleum to give them return on their investment. I just can’t wait to go racing again. I’ve been enjoying it watching on FOX Sports 1 and NHRA All Access, but it’s going to be great to get back out there.”