Not long ago, Hector Arana Jr. was a championship contender in the Pro Stock Motorcycle ranks, and after winning two events during last year's abbreviated season, it is apparent that the second-generation rider has not lost his edge.
12 Jan 2023
Kelly Wade
Feature

Not long ago, Hector Arana Jr. was a championship contender in the Pro Stock Motorcycle ranks, and after winning two events during last year's abbreviated season, it is apparent that the second-generation rider has not lost his edge. Running less than half of the NHRA Camping World Drag Racing Series events, Arana claimed back-to-back victories in Dallas and Las Vegas, and played the role of spoiler in the Countdown to the Championship. The boost of morale and motivation is set on simmer as he contemplates what lies ahead for 2023.

"Originally, we didn't have a sponsor for last year – but we knew we had a really good package, and we love drag racing," said Arana. "So, my dad and myself put together four races that we were going to do for 2022. Eventually, with the help of some great people, that turned into seven." 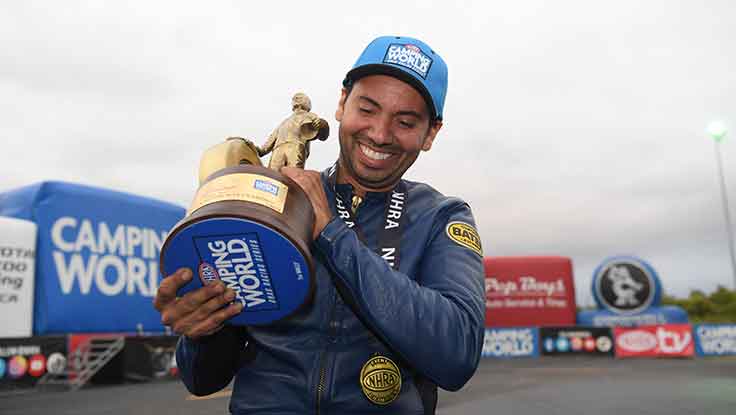 After a warm-up race in Charlotte, Arana qualified in the top half at Norwalk and raced to the semifinals. He recorded an unsightly red-light there and faced trouble at the starting line again in each of the next two events, but in no way does he believe that those too-quick starts should be chalked up to "rust."

"We had an issue, and I was trying to idle the bike so it wouldn't stall when I went on the two-step. That was throwing me off my normal routine," he explained. "Even if I'm off [the motorcycle] for a while, maybe the first pass I might feel a little rusty or some extra nerves, but I was born into Pro Stock Motorcycle. It's like riding a bicycle, you just hop on and go."

Despite those frustrating scarlet endings in his early efforts, Arana continued to pursue the magic they knew they held in their hands. With the assistance of Jim and Flo Gottmann and AllTech Sign Service, LLC, Arana made the trek to Reading, and although he came up empty-handed, they turned their attention to Dallas and the raucous 10-day festival known as the Stampede of Speed.

The race wasn't part of their original plan, but they had done well there in 2021 – Arana reached the final round next to event winner Matt Smith – and, enticingly, part of the Stampede of Speed was a complementary test session.

"We tested really well," said Arana. "We got to make some changes that we'd been wanting to make, and the motorcycle responded. We qualified sixth and were really happy, but Sunday was a whole new day with totally different weather. There was a really strong crosswind, but we were able to compensate for the weather, and I was able to get the bike down all four runs. That's what got us the win."

Arana's ability to maneuver his motorcycle effectively brought triumph over seasoned rider Chip Ellis; championship gunners Angie and Matt Smith; and in the final, he hammered out a win over former world champ Jerry Savoie, whose three previous Dallas trophies tie him with Eddie Krawiec as the most victorious Pro Stock Motorcycle rider at Texas Motorplex.

"It was the best feeling ever," Arana said of the trophy that was his first since the spring race in Las Vegas in 2019. "It charged us up, and it was supposed to be our last race of the year, so we celebrated. We don't usually do that – we usually pack up so we can get home or get to the next race, but we were like, 'We're just going to enjoy this.' It was a nice party, and that's when we were introduced to Steve Bryson. The next thing I know, we're negotiating a sponsorship deal to go to Vegas, and that same night it turned into, 'Let's do Vegas and Pomona.' "

Reality soon set in, though, as the team began to grasp the enormity of the task at hand. Sitting in Dallas, they were halfway to Las Vegas; however, they didn't have the parts or pieces necessary for two more events. They headed home to prepare, but roadblocks immediately began to appear.

"On the trip back to Indiana, the motorhome started to have issues. We barely made it back, then we had to fix that and rebuild the motors for Vegas and Pomona; it was a huge scramble," said Arana. "Parts didn't show up in time, the technician who was supposed to put the transmission together got Covid. We had to borrow another motorhome, but the hitch we ordered for it didn't show up, so we had to make one. Wednesday of Las Vegas, my dad was at the shop cutting up and welding a hitch. We hired a truck driver to help us drive through the night, and we broke down on the way there. We had so many issues, and it was like, 'Are we not supposed to do this?' " 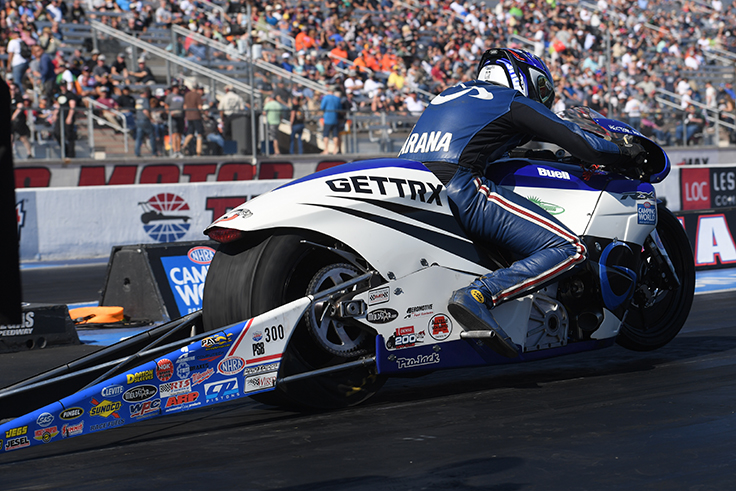 The Aranas were committed, though, and they showed up for the first qualifying session at the NHRA Nevada Nationals with their freshly wrapped GETTRX Buell and got to work. The bleak misfortune carried into qualifying but starting from the No. 15 position did not hold Arana chained.

A first-round victory over a too-hungry red-lighting Angelle Sampey set up a quarterfinals match with Eddie Krawiec, and there Arana was first to leave the starting line and quicker to the final stripe – with the second-quickest pass of the round – to gain even more momentum. In the semifinals and the final round, he came dealt another double-edged blow to Mr. and Mrs. Smith, first defeating Angie in the semifinals on a holeshot and then replicating the feat to oust Matt in the final.

The Smiths had stated their intentions early in the Countdown: they wanted to finish No. 1 and No. 2 in the Pro Stock Motorcycle points. They didn't count on Arana.

"I did kind of feel bad, knowing they were racing for a championship and I wasn't – but listen, he won," said Arana. "He had the top bike, but we were also a top bike when we raced full-time. There has definitely been a really big rivalry when it comes to Matt and Angie, and it felt awesome to knock them out. I think it made it interesting that we were a factor this year, and if it wasn't for us, [the championship chase] might have ended sooner.

"I had a fire in me, and I rode my butt off, but we also had to perform. Every run on raceday, we ran faster and faster.  To get another win, it was like, 'Man. We're back.' I missed it so much."

The racing future is yet to be determined for Arana, but on the heels of such an encouraging experience, he's excited and hopeful.

"To win two races – one of them with a new sponsor – it was just amazing," he said. "I can't thank Steve and Scott Bryson and the whole GETTRX/Global Electronic Technology group enough for the opportunity. Even if those two races are all there ever is with them, I'm forever grateful and honored to have made that new friendship.

"We'll be out there this year, we just don't yet know how many or how often. We have a great package, we're making really good horsepower, and we definitely want to race. We're prepping the bikes to run Gainesville, and if sponsorship comes through for a full season, we'll be ready."