Flawless: The Eight Most Impressive Victories of 2022 (Part 3, Funny Car)

In this third editions of a four-part series, NHRA's Brian Lohnes takes a look at the most impressive Funny Car wins of 2022. It was hard to nail down just two, so he opted to go with three standout performances.
10 Jan 2023
Brian Lohnes, NHRA on FOX announcer
Feature

It seems counter to accepted logic that the nitro Funny Car category would be the one class which had three wins that were so good, so well executed, and so thunderous that it forced us to break our “two per class rule” for this series. After all, these things are the bad apples of Professional drag racing, right? They throw parts, they change lanes, they occasionally catch fire, so there’s no way one could ever match the consistency found in vehicles with 10% of their power.

The three victories we’re going to look at here are studies in the mastery of Funny Car racing that some teams seem to have a fleeting hold of and others replicate on a near-weekly basis. Two of the names you’re sure to expect, but the third one you may not.

The eventual 2022 NHRA Camping World Drag Racing Series Nitro Funny Car world champion had this incredibly nasty habit of reminding us that his name should never be far from our lips over the course of 2022. While Capps had tasted success with wins in Las Vegas, Bristol, Indy, and Charlotte, it was Dallas that showed us the full-potential greatness of the Napa GR Supra and its veteran team. With crew chiefs Dean Antonelli and John Medlin locked in for the championship haul and Mother Nature providing the necessary conditions to make the event a 3.80s weekend, they went to work.

The ”Big Three” of the Funny Car class — Matt Hagan, Robert Hight, and Capps — all let fly in qualifying. Capps landed third with a 3.865, Hight was second with a 3.854, and Hagan with a Watusi-rattling 3.825 lead, all comers when the dust settled on four sessions of qualifying at the Texas Motorplex.

In the first round, Capps drew Jeff Diehl and set the tone for the rest of his race day with a 3.889. John Force was in the other lane for the quarterfinals, and amazingly, Capps ran 3.885, within four thousandths of his round-one performance.

A pivotal battle would face the team in the semifinals, and little did we know how important this one would end up being later, in terms of a championship. Ramping up his personal performance on the Tree to a .036, the car went 3.897, getting the better of Hight’s tire-smoking 7.486. In the final, Capps took on Hagan, who was having his own romping-stomping day, having run 338.02 mph in the semifinals against Bob Tasca III.

Once again, Capps owned the starting line with a .035 reaction time and a 3.911 against the .033/3.923 of Hagan. Talk about an instant-classic final. Talk about a driver and team synched like a perfectly running engine. Talk about a win that would later result in Capps being a three-time world champion. 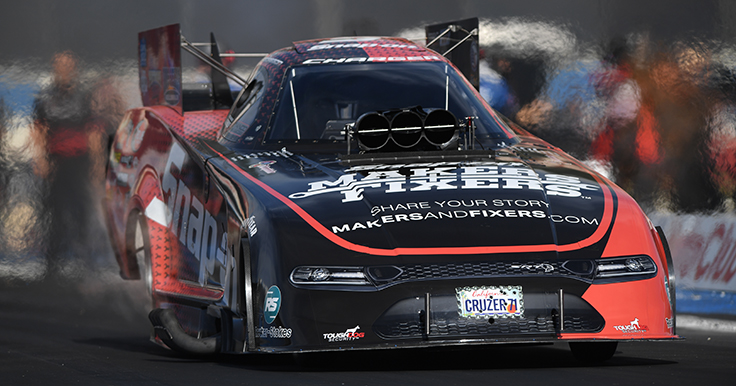 It was a tale of two seasons for Cruz Pedregon and the Snap-On Dodge team. They had frustration, they had runs that were off the expected pace, and they had not much to show for a lot of work, time, and sweat, as the last third of the season kicked off. It was at that point that Pedregon circled the wagons, made the decision to transition to a six-disc clutch program and also bring in Lee Beard to work alongside crew chief John Collins. As labor intensive as the process was, the car turned into a much more fearsome weapon, and that all culminated at the last race of the season.

Pedregon’s car was locked into a series of 3.84 runs, which landed them second after Ron Capps and crew snagged the No. 1 spot with a last-gasp 3.837 during the final session. Buoyed with the confidence of the quickest set of qualifying runs he had made in his life, eliminations began with a strong 3.862, which stopped Jason Rupert.

John Force then ran into the Cruz buzz saw, and he was thwarted with a 3.876. Alexis DeJoria, who has made a perennial habit of being a disruptor at the finals, didn’t have enough for Pedregon’s 3.864, and then it was down to a scrap with Capps to close the event in the gathering Pomona darkness.

The true magic of nitro racing is on display when a team has a handle on the car and parts to the point that it not only repeats but they can command it to actually work harder and go faster when they need it to. This was exactly the scene for the Snap-On team when they hammered a 3.839 at 335.65 mph in the final. The quickest run of Pedregon’s career stopped now-champion Capps’ 3.850.

Amazingly, Capps was one run away from winning a race where his car was even more consistent than Pedregon’s, but when it all mattered, John Collins and Lee Beard wore the red badge of courage in a slightly more robust fashion by truly pouring the coals to their now seemingly tamed and trained nitro funny car. 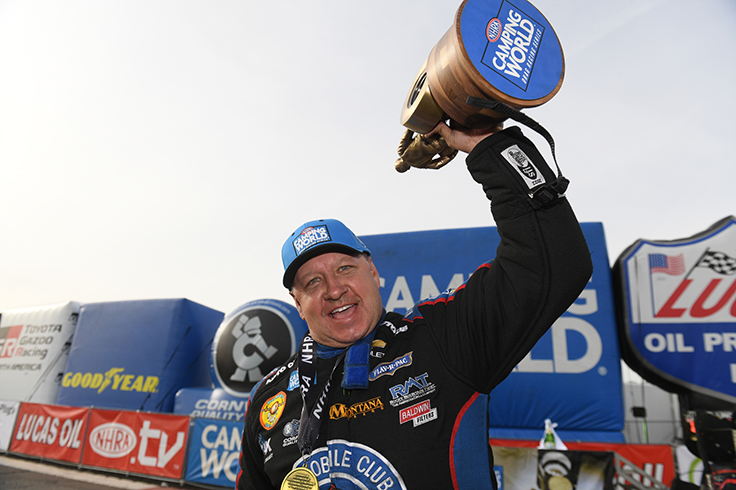 When it comes to impressive Funny Car wins in 2022, the single greatest example of a team exhibiting full mastery of their equipment and jobs came at the NHRA Arizona Nationals, where the Auto Club Chevrolet Camaro of Robert Hight captured their second straight victory to open the season. In the early part of the season, Arizona presented incredible weather conditions as well as a consistent surface for the teams to ply the trade on.

Hight qualified second, running 3.838, which is a world-class number, but Matt Hagan had unlimbered a 3.823, which held as the quickest run of the year. When eliminations started, true masterclass in Funny Car racing began. Paul Lee was the first to get doused when Hight laid down a 3.864. This set the table for the second round, where Bob Tasca III would be stopped with a 3.855.

Like Michael Meyers slowly stalking a victim, Hight, Jimmy Prock, and Chris Cunningham continued to ratchet up their pace and pressure. The semifinal run was an all-JFR meeting, and the team’s namesake was stopped in his tracks with a quicker-yet 3.847.

Of course, this set up a battle that had been forming as a virtual inevitability over the course of the day because Hagan had been shellacking his side of the ladder with a flurry of 3.80s runs as well. In the final, it was Hight with a sledgehammer exclamation point on the weekend, running 3.837.

The way the team went quicker every round, the .011 variance consistency of Hight on the starting line, and the fact that they had to take down a car that had proven their equal, if not their momentary superior, in qualifying makes this the best Funny Car win of the season. Put it this way, if the Labors of Hercules included a stop at the Arizona Nationals after he took out the Hydra and the Nemean Lion, the book would not have had a fourth chapter.

Robert Hight's performance gain from round one to four on Sunday: .027

Whew! There were many great races run in Funny Car over the course of 2022, but these three signature wins certainly stand alone in their impact, strength, and resonating effect for the teams involved. Threading the needle in a funny car is so hard for drivers and crew chiefs, so when performances like this are executed, it’s fun to recognize them. We have one class left, and if the nitro Funny Car class is a thrash metal band, the Top Fuel class is like a precise and finely tuned and timed orchestra. They’re up next, and yes, there’s plenty of stunning numbers to dive into there as well.