For a final look back at the 2022 season, NHRA's Brian Lohnes takes a look at the eight most impressive victories of the season, beginning with the Pro Stock Motorcycle class.
04 Jan 2023
Brian Lohnes, NHRA on FOX announcer
Feature

As Paul Simon once noted, there’s 50 ways to leave your lover, but he failed to mention there are approximately three million ways (or more) to lose a drag race.

We’re not here to look at losses. Instead, we’re here to look back at the eight most pristine, shiny, awesome wins of the 2022 NHRA Camping World Drag Racing Series tour. We’ll take you through two from each Camping World Series class, beginning with Pro Stock Motorcycle. 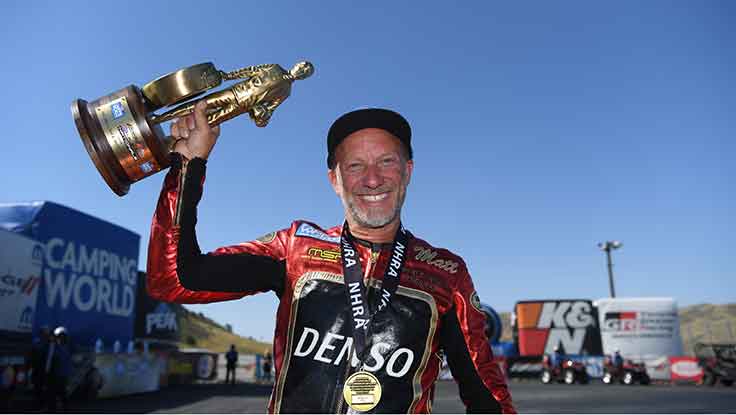 As we all know in this sport, the atmosphere giveth and the atmosphere taketh away, and when it comes to Bandimere Speedway, there’s a whole lot of taking because the track sits more than 5,800 feet above sea level.

In 2022, someone apparently forgot to tell Matt Smith’s Buell that Denver has thin air. This is the second most flawless victory of the Pro Stock Motorcycle campaign because of the track record-destroying performance that had fans’ jaws dangling and competitor’s jaws firmly set.

Smith became the first rider in the history of the track to run under 7.10 with a 7.09 in qualifying that placed him in the No. 1 position by a six-hudredth-of-a-second train length. His first-round 7.115 on a bye run was still trending four-hundredths better than the second-best qualifying time set by his wife, Angie, at 7.15. Smith proceeded to throttle Mark Ingwersen in the second round with a 7.103 at 189.87.

At this point, the world wondered if 190 mph could actually happen at altitude. They didn’t have to wait long, as Smith came out and ran 7.121, 190.03 against Angelle Sampey in the semi’s to claim the other side of the barrier-breaking honors for the weekend.

In the final, Smith put all the pieces together and unleashed a truly hateful-looking 7.097, 190.22 to just remind everyone that his qualifying elapsed time and third-round speed were by no means accidental. 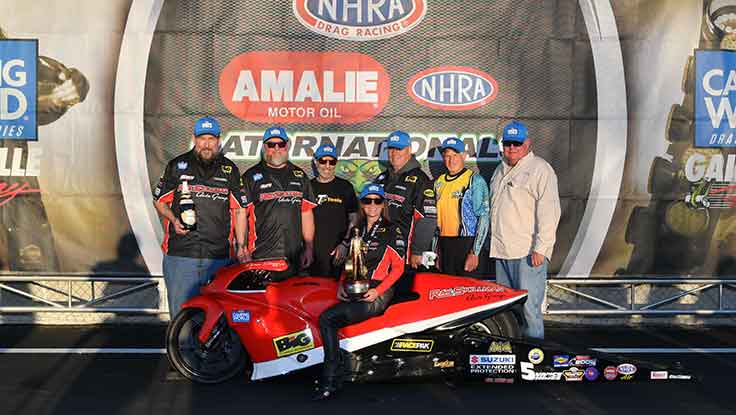 Matt Smith’s Denver win was one thing, but Karen Stoffer’s mauling of the Pro Stock Motorcycle record book in Gainesville was on an entirely different level.

The season for NHRA’s two-wheel racers didn’t start the way anyone had planned, though. Anyone who was there won’t forget the Biblical levels of rain that fell at Gainesville Raceway for days on end. The schedule was nuked, remade, nuked again, and by the time cars and bikes were on the track, the whole weekend seemed hopeless.

The one chance Pro Stock Motorcycle was going to have to qualify came at the moment that a brutal cold front was rolling into Gainesville, and riders declined to run in risky conditions with the blessing of race control. As a result, the field was laddered on 2021 points. Karen Stoffer was placed fifth, and while we knew Sunday would be fast, no one had any idea what she and crew chief Tim Kulungian had in the tank. The short answer? They had all of it.

In what will stand for some time as the single greatest single day of performance in the history of Pro Stock Motorcycle, Stoffer didn’t just dominate the race, she matched or bettered the existing world record four times on her way to a victory.

Angelle Sampey and Matt Smith were both upset victims in the first round, proving that power management was necessary given the frigid conditions. Stoffer leveled Jimmy Underdahl in round one with a record-shattering 6.682. She took the record from the existing 6.721 and knocked it square into the next tax bracket.

A round later against Eddie Krawiec, Stoffer lowered the boom, yet again running a stunning 6.665 at 200.71 mph. This run was met by a gobsmacked response among the Gainesville faithful and an incredulous one by not only her own team but every motorcycle outfit on the property.

Stoffer’s own teammate, Jerry Savoie, got a dose of smoke in the next round when a 6.721 was thrown at him. Savoie’s early shutoff 7.735 allowed him a good vantage point of the slowest run she’d make all day.

In the final, Angie Smith rode her Denso Buell to very game 6.723, which was the best effort anyone mustered against Stoffer, but it wasn’t nearly enough to cover a winning 6.700.

Stoffer turned in what was arguably as close to a perfect race as any drag racing team could ever hope for. Running under the national record four times without the benefit a single qualifying pass and winning in conditions that flummoxed some of their most experienced rivals while not missing a lick on the Tree or the tune is why this is the most flawless Pro Stock Motorcycle win of the 2022 season.

That’s one category down and three more to go. Can it get any better? Believe it or not it can. Stay tuned for part two.