After two seasons with Alex Laughlin in his dragster and Laughlin accepting a full-time ride in Funny Car for 2023, Scott Palmer can get back to the business of being Scott Palmer, which means driving Top Fuel and nitro-fueled Pro Mods.
06 Jan 2023
Phil Burgess, NHRA National Dragster Editor
Feature

Scott Palmer never planned to be the guy who rents his Top Fuel dragster out for someone else to drive. The Midwest fan favorite has too many other fun irons in the fire — including his popular Top Fuel-engined Studebaker or Corvette Outlaw Pro Mod — to tie himself down, but that all changed in mid-2021 when he put Pro Stock driver Alex Laughlin in the saddle of his dragster at the Mile-High Nationals to help him fulfill obligations to his sponsor, Havoline. That proposed one-race deal with Laughlin morphed into 10 more that year and then 12 more in 2022, leaving Palmer precious few opportunities to drive the car himself or to fulfill the growing business of match-racing his other cars.

But with Laughlin accepting a full-time ride in the Jim Dunn Racing Funny Car for 2023, Scott Palmer can get back to the business of being Scott Palmer.

“Racing with Alex was awesome and exciting because we love Alex Laughlin and his whole family,” he said. “We enjoyed racing with them, so we just kept doing it, but it was just time that he needed to go further and I needed to go do my crazy Pro Mod stuff.

“I knew I had to go back to driving more for Marck Recycling, Interpack, RJS, Trask Performance, and Tommy Thompson Motorsports, and everyone who has helped me over the last 20 years because they want to see me drive,” said Palmer. “They don't care if I'm running a Pro Mod, the Nitro Studebaker, or the Top Fuel car; they just like to go racing with me, and I just felt like I couldn’t go further. 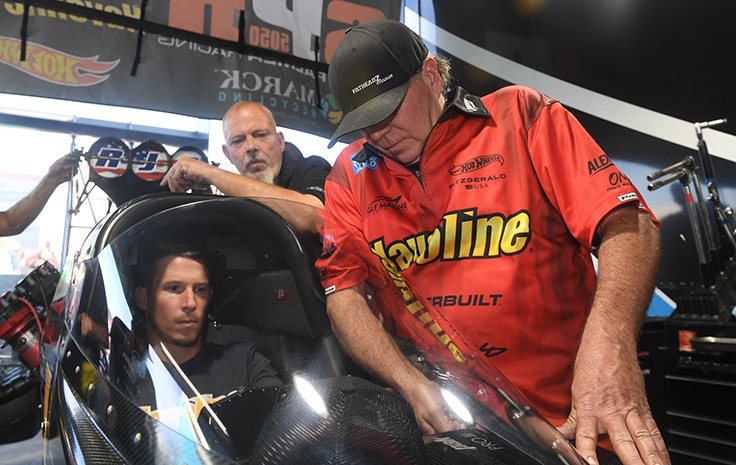 “And Alex wanted to run more races, but I just wasn’t prepared to go back to running an entire season of Top Fuel. I’d done that before and it was fun to be able to do it, but I need to run my Studebaker and [nitro-engined] Chevelle because I enjoy doing that and it works for me. I like driving all the crazy stuff and it’s kind of come back in style, and I don't want to miss that either.

“So I just think Alex getting the Dunn deal is a perfect fit for him because he can run all the races with a solid team that is going to run a full season because Jon Dunn is the best in the business at finding money and I get to go back and run for these sponsors I have — most of them I’d call more friends than sponsors — and get back to my 2021 plan.”

Since putting Laughlin into his car in mid-2021, Palmer only raced his dragster seven times, most of the time trying to do it at the same event, but the performance of both cars struggled when he did that.

“I don't want to be a two-car team that has two half-assed cars, you know?” he said. “I have the greatest crew ever, but I felt like I was burning my crew out when I did that. There were a few times I would make one qualifier and just park it and say, ‘OK, we're not prepared to do this,’ and that’s not fair to my crew guys or my sponsors.” 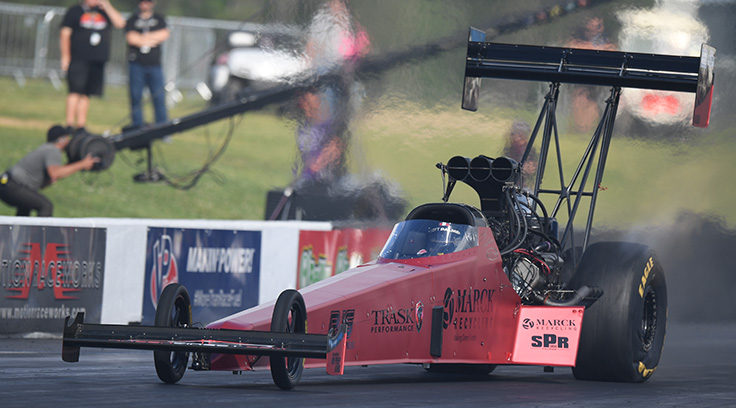 “Alex and I talked about it at the start of 2022, that it was going to be difficult for me to do any more races than we did in 2021, but the truth was, we did more. Don’t get me wrong — I enjoyed doing that for sure. I never woke up and said, ‘Oh, man, we gotta go because Alex is driving this weekend’ — but I have to take care of the other people who have got me here and he deserves the chance to run the full season.

“I've run a whole season before. I loved it. It was awesome. But I don't want to do it for the rest of my life. I want to go run Pro Mods and when I show up to an NHRA race, I want to have a competitive race car, and I just didn’t feel like I could do all the things I want to do and began to feel like I was getting spread a little too thin.

“I've told Alex all along, ‘Listen, people are going to be coming after you with deals,’ and I've always told him to entertain any offer that comes your way, that it would not offend me because everybody knows that I don't want to quit driving, and everybody knows that he wants to run more races, so, no hard feelings from me because I want him to carry on. I think he's great for our sport. He told me they had talked and asked me for my honest advice, and I said I think you should consider it. I said, ‘Listen, I'll be your biggest fan. I'll back you 100% and I'll help you do anything you can to get that deal because I think it's one of the best deals out there to run the full season when you don't really have the budget to do it.’ And Alex will be good for them, too; he’s so good at representing a company.”

So, what’s first for Palmer?

Although Palmer plans to run eight to 12 races in Top Fuel this season, his first competition of the year will be behind the wheel of his blown Corvette Outlaw Pro Mod at the big-dollar early-season race in Orlando, Fla, the week before his Top Fuel debut at the Amalie Motor Oil Gatornationals.

“I got invited to the big $100,000-to-win Pro Mod race, so right now my shop is completely focused on that Corvette because it's an honor to get invited. We're going to start testing it on January 18 in Noble, Okla., weather permitting, then run Orlando and then Gainesville.

“I haven’t set a schedule for the Top Fueler other than running Topeka and St. Louis that are close to home, but there are a lot of other tracks, like Bristol, that I love to run, but I don't really have a set schedule because I've been so sidetracked on this Pro Mod race because I need to take it seriously.”

In the meantime, Palmer’s Top Fuel equipment has been sent out for certification and he has new parts on order, and he’s engaged Don Lagana and his new Brownsburg, Ind.-based 142 Speed Shop with maintaining his dragster’s key parts — such as superchargers and clutches — between races. 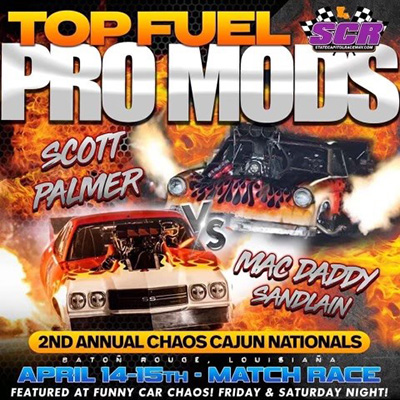 “NHRA Top Fuel racing is so hard to win at and it’ll beat you up because you’re running against guys with bigger budgets,” he admitted. “We do pretty good for what we've got and I’ve been to a few final rounds, but that was hard. I run these match races — especially running the Studebaker against J.R. Sanland in the blown Chevelle — to help my Top Fuel efforts. I get the notoriety for the people that helped me and then the appearance and t-shirt money and that helps me go to more NHRA races.”

Palmer’s ultimate Top Fuel goal, of course, is to win a race. He’s been runner-up twice — in Phoenix in 2018 and Epping in 2019 — both times losing to world champion Steve Torrence.

“We've gotten so close two times; we just happened to do that during total domination by the Capco Boys,” he admitted. “That was a bad time to run them. No time is a good time, but anytime is a better time than during that time. But we still have the same drive to do that, the same team, the same crew guys, the same everything, so we know we can do it. We just need to get back on track. I’m still a racer. I started with nothing. I painted cars in my garage and the way all this happened is work. I haven't been to Hawaii or Mexico or on vacation. I've been in here working every day because I love it and that's just how it had to be for me to make it.

“We think we have a car that can run high 3.60s — we mostly ran high 3.70s the last two years because we were trying to do the right thing for Alex, wanting him to go to the finish line every time for his sponsors and make a good showing — but I’ve driven the car as quick as 3.72, so we'll go back out trying to run .75 or faster will be our goal and go for the 3.60s.

“And, of course, we’ll continue to whack the throttle [during pit-area warmups] and do the things that probably don't help our performance but help our popularity. The whole throttle whack thing is crazy. I have fans that I follow us because of the stuff that we do, but whacking the throttle has been crazy.”

Studezilla to 300 and more guest drivers? 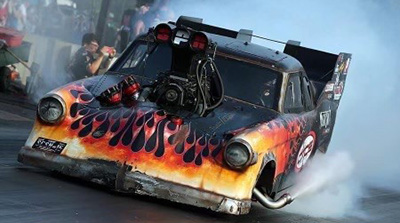 Palmer also has some performance goals for “Studezilla” — which is powered by pretty much the same 11,000-hp engine that drives his Top Fueler — chief among them a 300-mph pass.

“Turbo Pro Mods are already running 270 so I don’t see why we can’t do it,” he said. “Usually we run the car to the eighth-mile and it’s already gone 241 [mph] to the eighth, so I think that’s pretty close already. Bobby and Dom Lagana and Aaron Brooks have all been working with me on it, just trying to get it to leave the starting line super slow and get it rolling because it's such an oddball car with way too much power. But the goal now is just to get it to the eighth-mile safe and clean 10-15 times and then go for 300.”

Palmer also made big headlines last fall when he put multi-discipline motorsports star Travis Pastrana behind the wheel of his dragster at zMAX Dragster for a couple of get-acquainted short blasts. Will there be more lessons for Pastrana … or someone new?

“I think Travis will drive it again,” Palmer hedged. “I don't know of anyone who can stop at a couple of squirts if you have the opportunity to go further again. I plan to do more of that but I'm not talking about other people driving the car [at races] because I don't want to be a rent-a-racer, but there are a few people out there who are going to hit the gas in my Top Fuel car before they quit racing and maybe some [non-racing] people that want to do it that who I believe deserves a shot to see what it feels like, even if it's 200 feet, so we've got some stuff to work on and, man, it'll be fun.”