Yeah, but what if? A semi-serious look at the points battles heading to Pomona

Brittany Force, Robert Hight, and Matt Smith lead the points in their classes heading into the season-ending Auto Club NHRA Finals, but, as history has shown and possible points values back up, nothing is certain at the final race of the season.
04 Nov 2022
Phil Burgess, NHRA National Dragster Editor
DRAGSTER Insider

So, you think that the NHRA Camping World Drag Racing Series Top Fuel championship battle at next weekend's Auto Club NHRA Finals is just between Brittany Force, Justin Ashley, and Mike Salinas? That only Robert Hight, Ron Capps, or Matt Hagan can win the Funny Car championship? That Matt Smith’s only real competitor for the Pro Stock Motorcycle title is Joey Gladstone?

Well, realistically, you’re probably right, but not mathematically. Nine drivers technically still have a chance to win the Top Fuel crown, four are still in the running in Funny Car, and five riders could wheel out of Pomona with the bike title. Trust me — I gave the numbers the once-over ... twice.

Here's why: Because the Auto Club NHRA Finals features a point-and-a-half structure and four qualifying sessions, there are 191 points available, so, technically speaking, anyone within 191 points of the leader could still theoretically win the championship. Will they? Almost assuredly not, but play along anyway. You may learn something.

By way of example, let's take a look at the current Top Fuel points:

And, with all due respect to one of Top Fuel's all-time great pilots, let’s use Doug Kalitta as one of the most extreme long shots possible. Kalitta is 184 points behind Brittany Force. Force will end his slim hopes the moment she attempts to qualify — which has been broadly expanded recently to include firing the engine and attempting a burnout — which removes 15 of the possible 191 points off the table. New maximum is 176 points. So long, Kalitta (and Shawn Langdon). 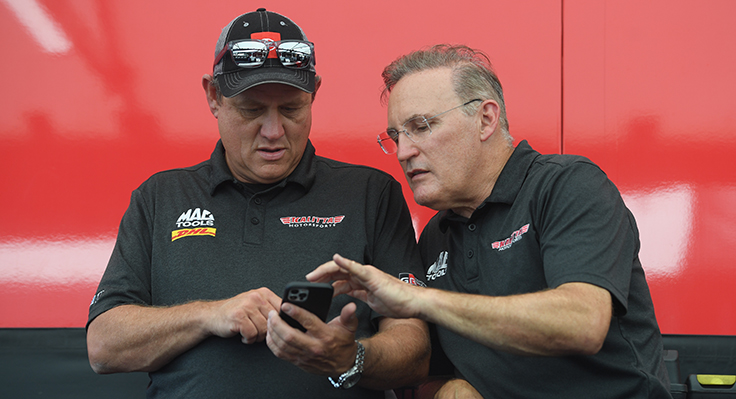 But what if Force were abducted by aliens, you ask? Shoot, then all Kalitta would need to do was qualify in the top four, have low e.t. or second-low e.t. of every session (or a combination thereof), and win the race — easy, peasy, right?  We are talking about a 49-time winner here. But aliens? Really, Phil? OK, just kidding. But don't ask Don Garlits. 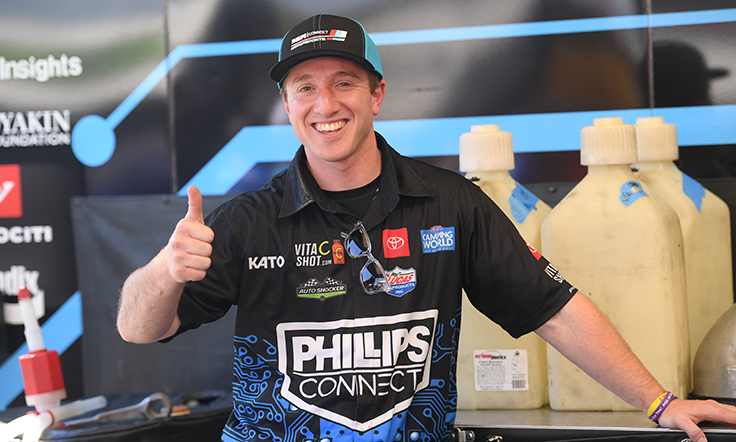 Of course, Kalitta would also need second-place Ashley to suffer, let's say, some mystery malady (like that could happen to him in Pomona, right?), but, hey, anything's possible. (Love you, Justin.)

With those two out of the way, he'd only be 118 points behind new points leader Salinas, which means that even if Salinas did show up and qualified somewhere between 13th through 16th in the field (which has happened exactly once this year) and then lost in round one (four times so far this year), Kalitta could win the race and the championship. Of course, everyone between him and Salinas would have to lose early, like round one or two, and not pick up bonus or qualifying points. Or maybe some of them could lose points for centerline infractions. (The next centerline crossing would cost Force, Brown, or Torrence five points, Ashley 10 points, and Salinas a whopping 15.) 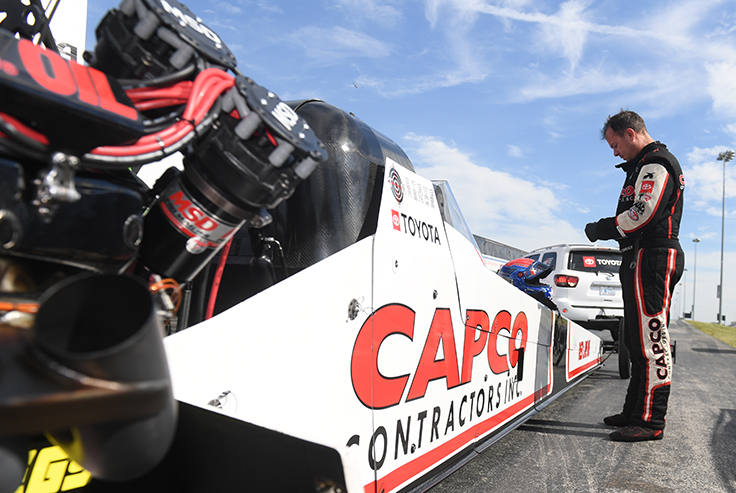 All kidding aside, realistically, the get-real line probably stops at Steve Torrence (-87). Steve-o has been collecting championships lately like they were getting ready to go out of production (they’re not) but he’s got a steep climb to get No. 5. Force will probably qualify No. 1 (nine times already this season) and has only lost in round one just twice in 21 races this year. She has gobbled up the majority of session bonus points this season, so expect her to expand her points lead over Ashley by a few points — but not likely the amount (30 points) she'd need to put him another full round behind her. Ashley's best bet is to earn seven or more points than her in qualifying (via session points or qualifying-position points). 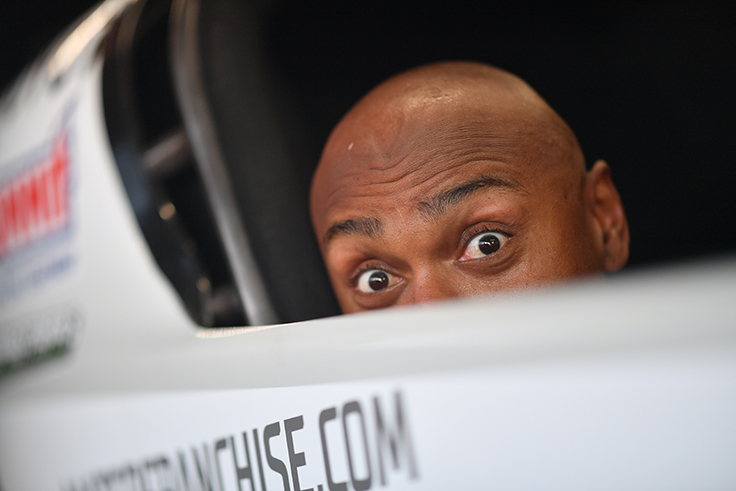 Unless they can significantly outperform her in qualifying, Salinas, Antron Brown, and Torrence will need to go three rounds further than her on race day, which means if she makes the semi's, it's game over for them and championship No. 2 for Force.

Does John Force still have a shot at a 17th Funny Car world championship? Of course, he does. The numbers don't lie.

All the GOAT has to do is A) fire Robert Hight and hope he had him sign a non-compete clause; B) finance the opening of six new NAPA stores on race week so that Capps has to attend their grand openings; and C) break both of Hagan's wrists in an arm-wrestling contest. 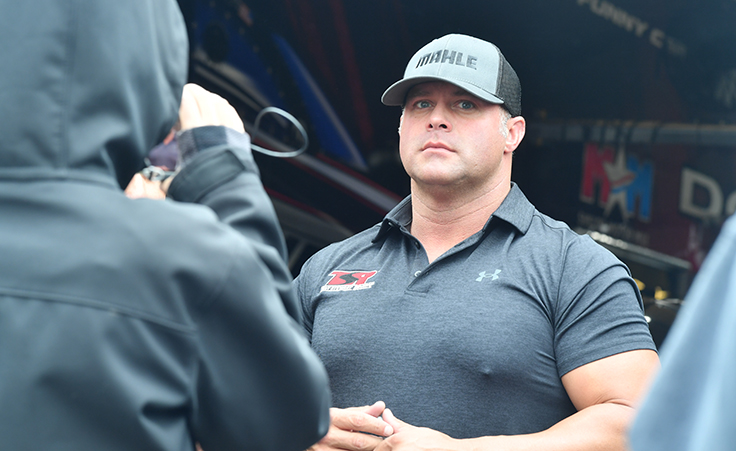 OK, so none of those things are going to happen (seriously, have you seen Hagan's biceps?), yet despite Hagan's recent comeback, he and Capps are in deep. Their best hopes are similar to Ashley in Top Fuel: Earn more points in qualifying than Hight so that they can get his lead under 60 points, meaning they'd only have to go two rounds further than him to take the points lead. If they can't do that, they'll need him to lose before the semifinals.  Keep in mind, however, that Hight is the only Pro driver to not lose in the first round all year. (And if any of the three cross the centerline, it would cost that driver five points. Keep that in mind when you're talking about single-digit  improvements.)

Pro Stock Motorcycle's longest-tenured rider is only five points from being mathematically excluded from the conversation, so he'll probably need someone to steal both of Matt Smith's bikes (and Angie's for good measure) to keep his indefatigably good spirit alive. (Steve: There’s probably something in the Rulebook forbidding this.) . To be honest, though, if I was playing Family Feud and the category is "Who can win the 2022 championship?" that answer “Steve Johnson” wouldn't even be on the board, but I like Stevie J's attitude. 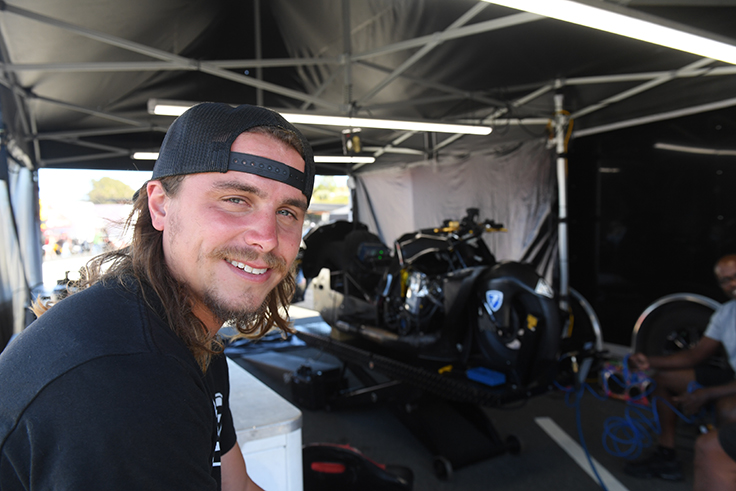 Seriously though, unless Joey Gladstone can out-point Matt by at least five points in qualifying, it's going to take a first-round loss by Smith to keep alive the chance of a crown placed upon NHRA racing's sickest flow.

Because, as my regulars here know, this is usually a historical column, I surely don’t want to disappoint them. So, historically, what are the odds of a come-from-behind championship at the season finale? Honestly, not that great.

Over the last 20 years, of the 80 points battles, only 10 times has the points leader coming into the NHRA Finals not walked out with the title. That’s better than 10%, but not much better (12.5% to be exact).

It’s happened four times in Top Fuel, three times in Pro Stock Motorcycle, twice in Pro Stock, and only once in the last 20 years in Funny Car.

I turned to my stats hero, Bob Frey, for the details. Take it away, Mr. Frey. 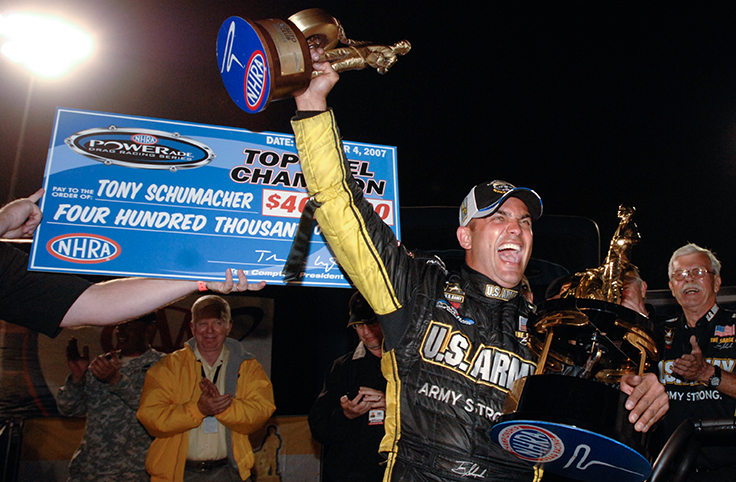 Also, in 2007, Matt Smith was in third place and 51 points behind Andrew Hines (and Chip Ellis, who was in second place) and won the championship.

At 20 points per round, those were big comebacks.

In 1980, Lee Shepherd needed to go to the semifinals to clinch the title (he had been to the final round at every race so far that year), but he broke in round two against Andy Mannarino. Bob Glidden won the race and set the record to win the title. He was 426 points behind Shepherd coming in (back when round-wins were worth 200 points apiece). In 1984, Warren Johnson was 72 points up on Shepherd and lost the championship.

Schumacher’s comeback from 336 points down during the 2006 season was the biggest (at the time) season comeback, and Raymond Beadle was down a total of 1,714 points during the 1979 season and came back to win the championship.

In addition to Schumacher’s two comebacks that Frey mentions, the other two come-from-behind Top Fuel championships of the last 20 years came in 2011 and 2017, for Del Worsham and Brittany Force, respectively.

Worsham, at the wheel of the Alan Johnson-tuned Al-Anabi dragster, was two points behind Spencer Massey entering the Finals (keep in mind that two points still required him to go one round further than Massey). He beat Massey head-to-head in the semifinals and ended up winning by a relatively comfortable margin of 58 points. 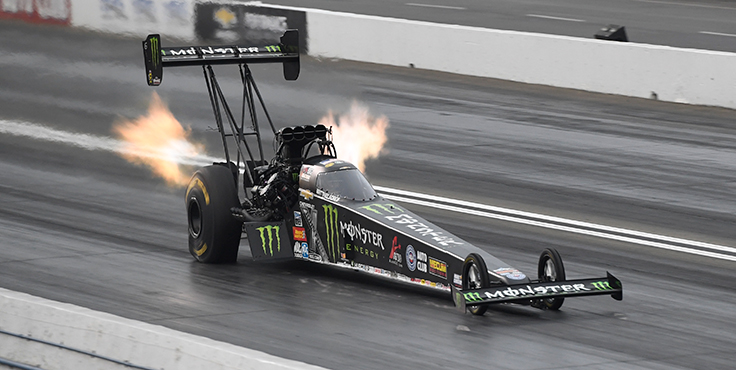 Force’s 2017 charge actually began two events before the Finals, when points leader Steve Torrence crashed in the semifinals at the Motorplex, destroying his No. 1 car. Coming into that event, Torrence’s lead over Force was 83 points. Force won the Dallas event to cut the lead to 57, then was runner-up on a red-light to Terry McMillen in Las Vegas, where Torrence lost in round two, and his lead was down to an even 20 points. Torrence lost again in round two in Pomona, and Force won again to take the title by a whopping 81 points. 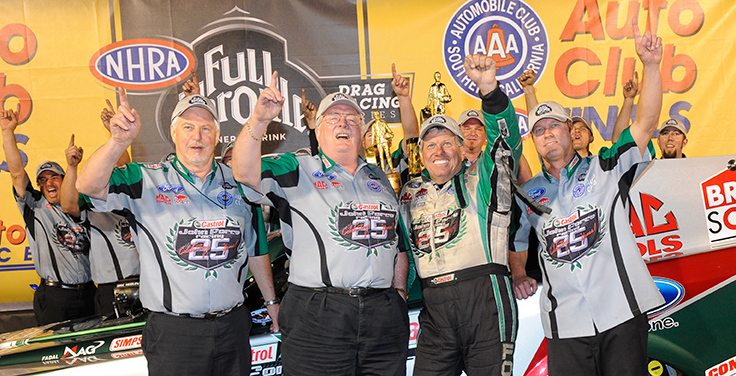 In Funny Car, only 16-time champ John Force has won the championship at the last event since 2002, doing it in 2010 to squeeze by Hagan. Force trailed by 37 points coming into Pomona, but Hagan was upset in round one by Bob Tasca III, and Force, in his final season with tuner Austin Coil, won the event to finish ahead by 58 points. 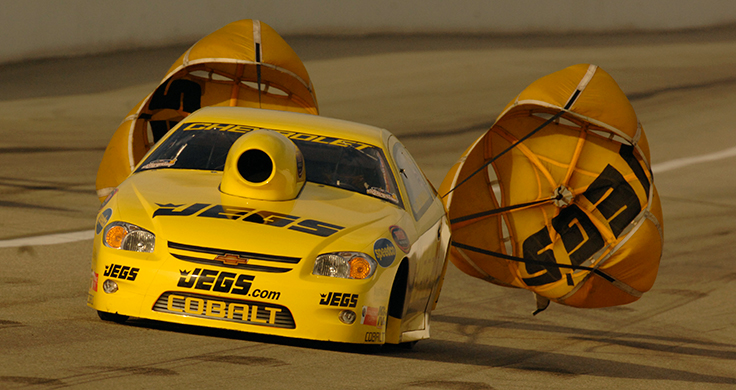 In Pro Stock, Jeg Coughlin Jr. won his third of five championships in 2007, overtaking Greg Anderson’s 34-point lead in Pomona to win by 19 points, taking advantage of Anderson’s stunning first-round loss to Justin Humphreys by winning the race. Ten years later, Bo Butner came from 40 points behind Anderson to win by just seven points. You can read the details of that championship, one of our 10 closest finishes in history, here. 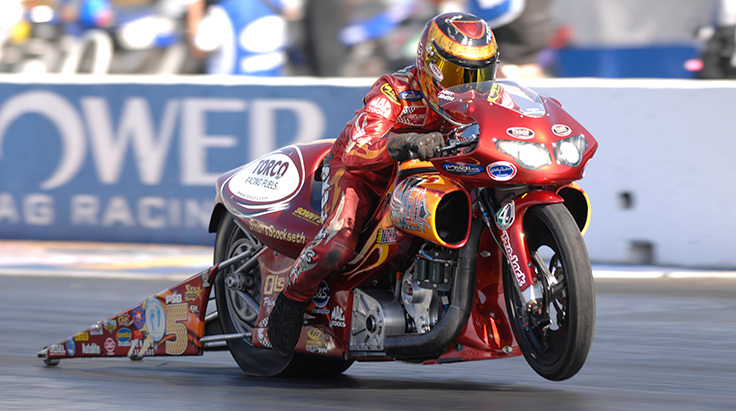 In Pro Stock Motorcycle, Matt Smith won the 2007 championship from third place, slingshotting past both Chip Ellis and Andrew Hines to win by just six points [story], and three years later, rookie L.E. Tonglet won the title by an even smaller margin, just four points, after Hines red-lighted in round one. 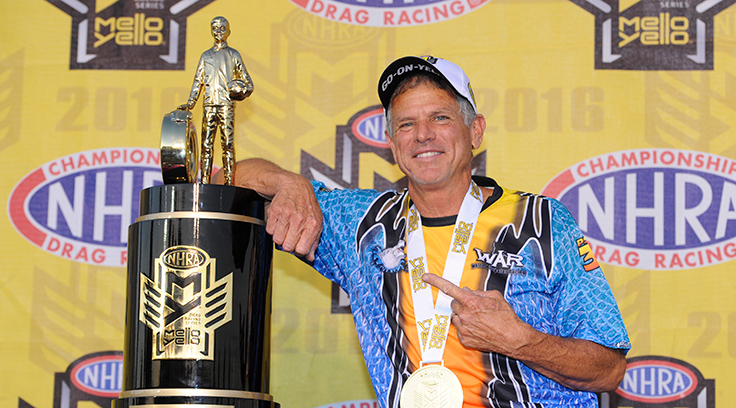 Finally, 2016 champ Jerry Savoie also came from third place in Las Vegas to first place in Pomona, victimizing Hines (again) and teammate Eddie Krawiec, both of whom lost in round two, to win the title by 24 points.

So, there you have it, a look at some Pomona nailbiters from the past 20 seasons. Can someone come from behind this year? Certainly (but probably not Kalitta, Force, or Johnson). The odds aren’t with the second-place drivers, but, as we all know, anything can happen at the season finale.