Phil Burkart Jr. will attempt an unprecedented double this weekend at the Pep Boys NHRA Nationals as he looks for victories in both a nitro Funny Car and a Top Alcohol Funny Car.
14 Sep 2022
Posted by NHRA.com staff
Feature

Phil Burkart Jr. will attempt an unprecedented double this weekend at the Pep Boys NHRA Nationals as he looks for victories in both a nitro Funny Car and a Top Alcohol Funny Car. In the 71-year history of the sport, only past world champion Pat Austin has won in both the nitro and alcohol categories at the same event, doubling in Top Fuel and Top Alcohol Funny Car in Topeka in 1991 and Phoenix in 1992.

"I'm not sure what odds the bookies would give us, but we are certainly going to give our best effort," Burkart said. "It'll be exciting for me, for sure. I've never driven both kinds of cars at a single race. I'll need to be on my toes because the procedures for driving each car are quite different. I'll have to keep reminding myself which car I'm in."

Burkart is a proven winner in both classes. His nitro career has included stints filling in for legend John Force in the Castrol machine, several campaigns with Del Worsham's Checker-Schuck’s-Kragen outfit, and a variety of individual efforts with different teams. In Top Alcohol, Burkart is currently enjoying his best times ever, winning many more events and the 2017 East Region championship in Jay Blake's "Follow A Dream" flopper. 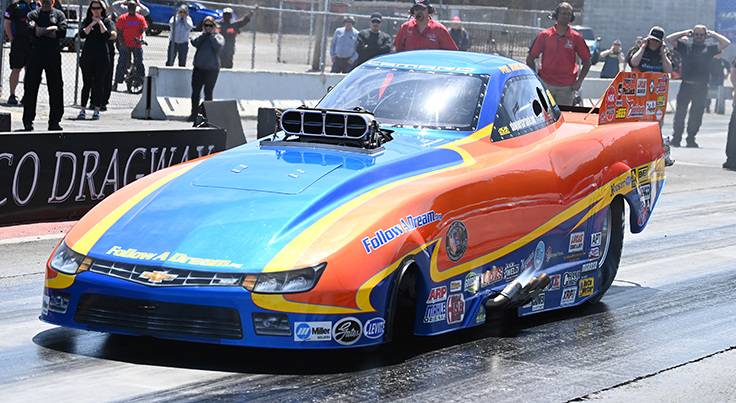 "The Follow A Dream car has been on a rail," Burkart said. "We are second in the Eastern Region points and charging hard for the championship. We've already been to the winner's circle twice [in Lebanon and Atco] and had two runner-up results [in Atco #2 and Epping], so we certainly feel we have a car that can win this weekend.

"In Funny Car, Mark Herzhauser has once again asked me to drive for him. This will be his third race of the year. We managed to run really well in our first two outings in Richmond and Bristol, so the team was inspired to add this race to their schedule. With a guy like 'Jimbo' Ermalovich serving as crew chief, we know anything is possible. It's a bit of a David vs. Goliath situation, but we're not backing down. We want to upset the cart."

Now a historic site open to the public year-round, Eastern State Penitentiary was the most expensive prison in the world when it was constructed, mainly due to the fact prisoners were separately housed. Known for its grand architecture as much as its strict discipline, it was the first true "penitentiary" in the world, a facility designed to inspire penitence and true regret in the hearts of its prisoners.

Both race teams are headquartered in the Northeast, making this race extra special for everyone involved. Blake hails from Cape Cod, Mass., while Herzhauser calls Atlantic Highlands, N.J., home.

"I feel very fortunate to be driving for two guys, and two teams, who have this incredible amount of passion in everything they do," Burkart said. "The heart and desire to do our very best is certainly there. It'll be a lot of fun to see how things turn out on the racetrack.

"It's also going to be very cool to experience the new and improved Maple Grove Raceway under the ownership of my friend Kenny Koretsky. Kenny is a first-class guy, and I know this track will be better than it's ever been. For those of us from the Northeast, it's a very special place, and I'm glad to know Kenny will carry this place into the future."