Fans jammed Houston Raceway Park to capacity on Saturday as qualifying was completed and the fields set for the NHRA SpringNationals. There was plenty of drama and excitement, but also a fair amount of tire smoke in the nitro classes as crew chiefs were forced to break out their warm weather tune-ups for the first time this season.

In the end, the tuners found what they were looking for, especially in the Capco camp where where Steve Torrence unloaded a 3.693 in his Capco dragster to knock Brittany Force from the top spot in Top Fuel. Ron Capps held on to earn the pole in Funny Car, while rookie Camrie Caruso and Karen Stoffer remained at the top of the charts in Pro Stock and Pro Stock Motorcycle, respectively.

In Saturday’s opening Top Fuel session, just three dragsters went to the finish line under power. The most impressive run was made by four-time champ Torrence, who powered to a 3.768 in his Capco dragster, a precursor to his later 3.693. Tony Schumacher also earned a pair of bonus points with a 3.801 while Cameron Ferre also tallied a point after a 3.927.

Later in the day, there was a parade of 3.6 and 3.7-second runs from most of the top teams including Torrence, who is the top qualifier for the first time this season and the 32nd time in his career.

“Right now, [tuners] Richard Hogan and Bobby Lagana are working hard to try and get this car back to where it’s been. In this sport, when you’ve got Grubby [David Grubnic] and Brittany Force out there running 3.63 you’ve got to change and evolve. We’re picking away at it and with the weather getting warmer, we need to learn as much as possible. It’s only been four races, but everyone has been giving us crap about [not winning]. We need to fix that.”

Doug Kalitta’s Mobil 1 dragster also delved into the 3.6s with a 3.696 for the No. 3 spot while the rest of the top eight includes Justin Ashley (3.697), Austin Prock (3.701), Antron Brown (3.704), Lean Pruett (3.711), and Tony Schumacher (3.720). Mike Salinas ran a best of 3.722 in his Pep Boys/Scrappers entry and that's not quick enough to make the top half of the field. He'll race Schumacher in round one without lane choice, a further testament to the increased level of competition in Top Fuel.

Coming off a 3.86-second run on Friday, Capps did exactly what he needed to do in order to prepare for Sunday as crew chiefs Dean Antonelli and John Medlen made the right adjustments to get the NAPA Dodge down the track. Capps ran a 3.931 in Q3 to pick up three bonus points and then held off the field, including Robert Hight in Q4 to seal the top spot. Capps isn’t normally known for his dominating qualifying performances but he’s been the low qualifier in three of the first five events this season. With a shot field, he'll be rewarded with a free pass in round one. 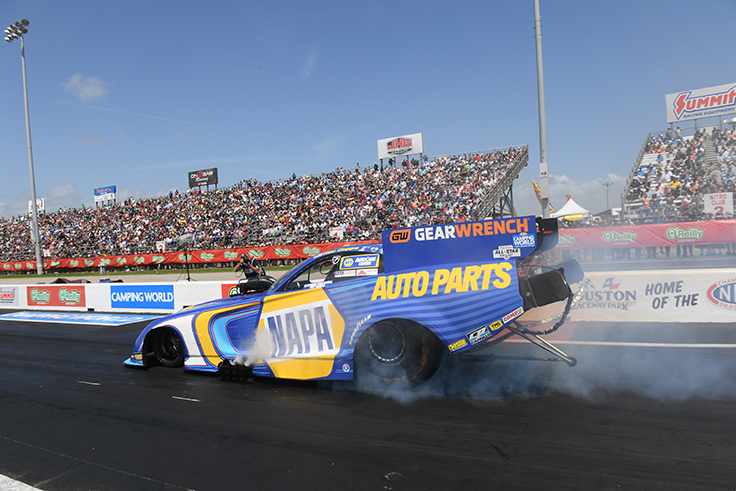 "I feel better now," Capps said. " I had a nice view of the AAA car [Robert Hight] and we managed to stay ahead of them. There are 15 cars here which means No .1 is more important than ever. A lot of teams pushed a little too hard. We were in the staging lanes and the dark clouds started rolling in. Guido [Dean Antonelli, crew chief] went into the box twice and he said something about Top Fuel. I think he saw Torrence's run. We knew conditions were there and we had Jimmy [Prock] next to us. Robert missed it by .001again thankfully.  We'll take it."

Camrie Caruso held on to the top spot to become just the second woman to qualify No. 1 in Pro Stock thanks to her impressive 6.547 from Friday. Caruso’s best pass on Saturday was just a 6.605, but she’ll be the last Pro Stock racer introduced during Sunday’s pre-race ceremonies. For someone with just five races in the Pro Stock car, she's already well ahead of even her own lofty expectations.

“Honestly, this means the world to me and my team, and everyone who backs me. They all deserve it,” said Caruso, who will race Fernando Cuadra Sr. in round one. “When I first came out here, I said I want to be No. 1 qualifier, win races, and win a championship. Jim [Yates, crew chief] said you need to chill but I believe in our team. I’m just super grateful for this opportunity. I never would have thought we’d achieve such a cool thing so soon.” 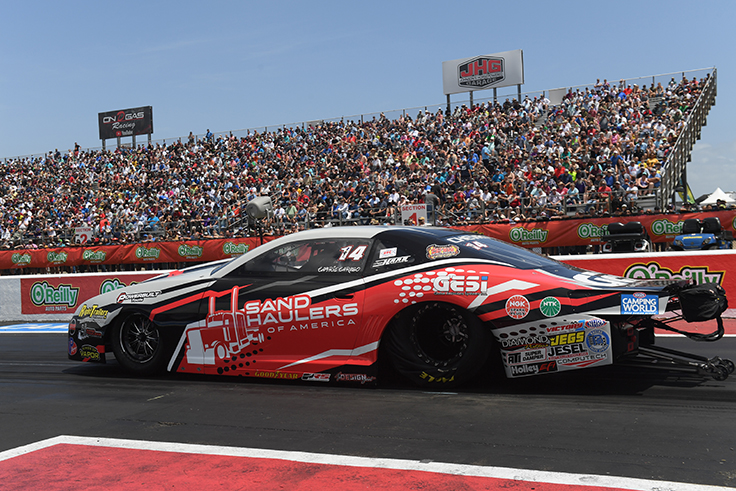 Caruso’s day was far from perfect. Not only did she miss out on bonus points, in Q4, she was involved in an off-track incident when her Camaro got tangled up with Erica Enders’ parachute. Caruso’s car sustained slight damage to the rear wing, but it won’t affect her status for Sunday, and it didn’t affect her attitude.

“The race car has got to get fixed but we’re fine,” Caruso said. “I stopped [on the return road] and it just didn’t’ go as planned. It sucks that it happened but we’re fine.”

Despite the top-end mishap, four-time champion Enders was in many ways the star of Saturday’s qualifying show with a pair of 6.55-second runs to sweep all six available qualifying bonus points. Enders, returning to the site of her first national event win in Super Gas, will race against Cristian Cuadra in a re-match of the Four Wide Nationals final from Las Vegas two weeks ago.

Aaron Stanfield and Greg Anderson also held serve and remained No. 3 and No. 5, respectively. Both racers netted three bonus points on Saturday. Cuadra Sr. moved to the bump spot by knocking Shane Tucker out of the field in the final session.

Karen Stoffer, Friday’s leader in the Pro Stock Motorcycle class, didn’t get bumped from the top spot, but she needed a significant improvement in order to do it. Early in the session, Stoffer surrendered the lead to Steve Johnson, who rode to a 6.749. Johnson, who topped 200 mph for the first time in his career, later stepped up to a 6.739, but Stoffer ultimately captured the top spot with a 6.738, 200.35 on her Big St. Charles/Skillman Auto Suzuki. Stoffer now has six low qualifier awards in her career.

“This is amazing because the round we ran 6.738, I didn’t think it was that great of a pass,” Stoffer said.  “Steve [Johnson] had gone past me for No. 1 and when we took it back I was really surprised. The pass wasn’t that great. That last run [Q4] was also a tough ride. I had to correct a few times, but this is a beautiful piece of machinery and Tim [Kulungian] has tuned up so fine for me. Thanks to Jerry [Savoie, teammate] and all the people behind me.”

In addition to Stoffer and Johnson, there were several notable improvements on Saturday. Eddie Kraweic moved to No. 3 with a 6.798 on his Vance & Hines Suzuki while reigning champ Matt Smith also improved with a 6.814 on his Suzuki. Jimmy Underdahl also made a strong run on the Scrappers Suzuki, running a seventh-best 6.846 and topping 199-mph.