Suffering his first bump in the road in the NHRA Countdown to the Championship playoffs, Top Fuel points leader Justin Ashley will look to bounce back at a track that served him well just a season ago when he won the Texas NHRA FallNationals.
14 Oct 2022
Posted by NHRA.com staff
Feature

Suffering his first bump in the road in the NHRA Countdown to the Championship playoffs, Top Fuel points leader Justin Ashley will look to bounce back at a track that served him well just a season ago. Ashley is the defending event winner at the Texas Motorplex, and a second straight victory at this weekend’s 37th annual Texas NHRA FallNationals would put him back on an ideal path to try and claim his first NHRA Camping World Drag Racing Series world title.

Ashley advanced to the final round at the first two playoff races in his Phillips Connect dragster but saw his lead evaporate to just 14 points with a first-round loss in St. Louis coupled with a victory by four-time defending world champ Steve Torrence.

Ashley, though, is not in panic mode, trusting a team that has helped produce a pair of victories and six final-round appearances during a standout 2022 season. Plus, Ashley has plenty of confidence racing in Dallas coming off last year’s win, hoping to replicate that to kick off the second half of NHRA’s six-race Countdown to the Championship playoffs.

“Our whole team's excited about it,” Ashley said. “Obviously, we didn't have the kind of weekend that we expected or the kind of weekend that we wanted in St. Louis. But I thought that we had a really productive first two races, and if you had asked me prior to the Countdown if I would like to be in the position we’re in right now going to Dallas, of course, we would have said yes. So, we feel good about the position that we're in. It was a really good regular season. I think it's been a great Countdown for us. But now, all bets are off, and we have to finish strong over these last few races.” 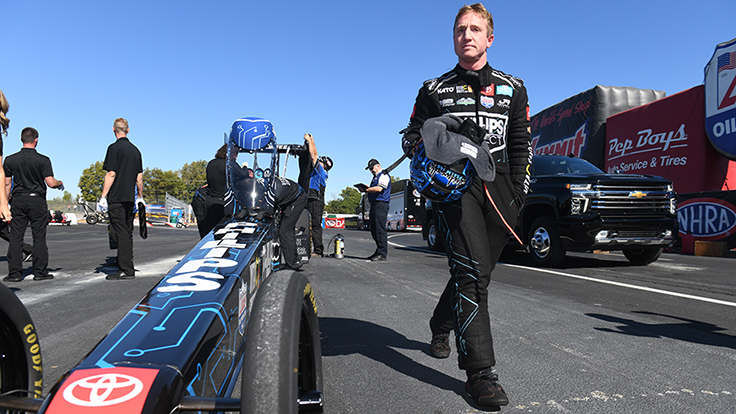 Ashley (Top Fuel), Ron Capps (Funny Car), Greg Anderson (Pro Stock), and Matt Smith (Pro Stock Motorcycle) won last year’s playoff race, and this season’s event will also be broadcast on FOX Sports 1 (FS1) as the playoffs head to crunch time in Dallas. It is the 20th of 22 races during the 2022 NHRA season, and Ashley has been consistent throughout, opening the year with a victory and never dropping lower than fourth in points.

That helped build Ashley’s confidence, as did racing with a team with a championship résumé. That’s helped erase some of the nerves involved in a race for the young standout’s first world championship, but Ashley knows there’s plenty of work to do, especially with a loaded field behind him. In all, there are six drivers within 88 points of Ashley, including Torrence, Brittany Force, Mike Salinas, Antron Brown, Josh Hart, and Doug Kalitta. Force and Salinas are just 30 and 35 points behind, respectively, which means anything can happen over the final three races.

But Ashley’s sole focus is on this weekend, where he will try to recreate last year’s spectacular performance, including a win against Torrence in the final round.

“In the Countdown, the margin for error is very small,” Ashley said. “We learned from [St. Louis] and moved on. For us, it's all about Dallas, it's not about Las Vegas, it's not about Pomona. Right now, it's about Dallas and going out there and putting our best foot forward, and you know, come to the end of Dallas, we want to make sure that we collected enough bonus points that we stacked enough round-wins to feel good about where we're at heading into the last two races.

“We did expect to be here, and we just love that we're in this situation. We are appreciative that we are where we are, but we need to focus because there's a lot of people behind us right now that are ready to jump and pounce on any opportunity.”