Brittany Force knocked one item off her bucket list when she won in Sonoma. Now the Top Fuel points leader will try to add another, this time at Pacific Raceways for this weekend’s Flav-R-Pac NHRA Northwest Nationals.
28 Jul 2022
Posted by NHRA.com staff
Feature

Brittany Force knocked one item off her bucket list just days ago when the NHRA Camping World Drag Racing Series star driver won in Sonoma. Now the Top Fuel points leader will try to add another, this time at Pacific Raceways for this weekend’s 33rd annual Flav-R-Pac NHRA Northwest Nationals.

It’s her sponsor’s race and it closes out the famed three-race NHRA Western Swing, and Force would like nothing more than to win for the first time in Seattle as the NHRA returns to the facility for the first time in 2019. Force is riding high in her 11,000-horsepower Flav-R-Pac/Monster Energy dragster heading to the race, obliterating the track record books in Sonoma and moving back into the points lead.

She’s collected four wins thus far during a championship-worthy 2022 season and Force is eager to keep rolling and come through for the first time in Seattle, at a track and a race that means a great deal to the Top Fuel standout.

“It is exciting and it’s great to return to Seattle,” Force said. “It’s been a while, but that’s another racetrack where I grew up racing in Super Comp, Top Alcohol Dragster, and going there as a kid. (Teammate) Austin (Prock) got his first win there (in 2019) and there are just a lot of great memories there. It’s exciting that it’s our sponsor’s race and we’re coming out of Sonoma strong, and we plan to have the same success this weekend in Seattle.”

Austin Prock (Top Fuel), John Force (Funny Car) and Matt Hartford (Pro Stock) won the race in 2019, the last time the NHRA Camping World Drag Racing Series raced at Pacific Raceways. This year’s race will be broadcast on both the FOX broadcast network and Fox Sports 1 (FS1), including live eliminations coverage starting at 4 p.m. ET on Sunday, July 31 on FOX. It is the 13th of 22 races during the 2022 season and the anticipation is high for NHRA’s return to Seattle. 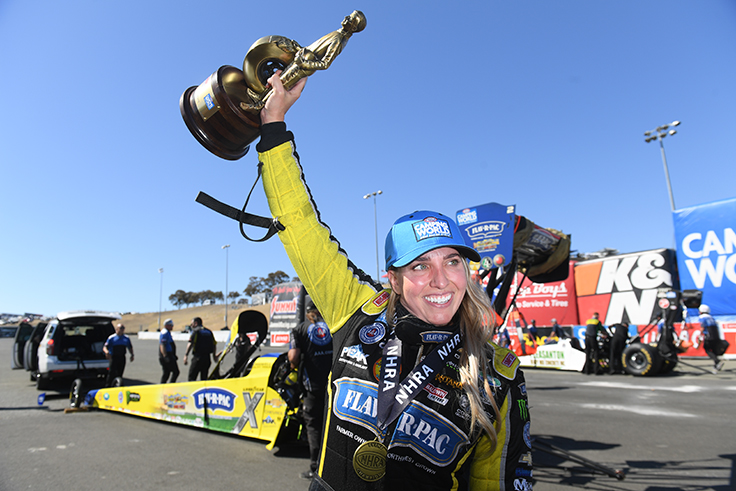 That includes Force, who is chasing her second world championship. To get in a position for that, she knows the importance of running well this time of year. Of course, so does her competition, a list that includes Mike Salinas, who also has four wins in 2022, Denver winner Leah Pruett, Justin Ashley, four-time Seattle winner Antron Brown, Tony Schumacher, Doug Kalitta, four-time defending world champ Steve Torrence, Josh Hart, Clay Millican, and Austin Prock. But Force has the ultimate confidence in her team, which is led by crew chief David Grubnic, and her goal is to put on a show in Seattle.

“I’m always betting on us, and I feel that we are the team to beat,” Force said. “It’s tough weekend after weekend in this class and there’s a lot of good competition out here, but I’m always pulling for us. We have a solid race car and we’re going for a championship. It’s coming up close now. It’s been a long season and now we’re getting ready to finish this Western Swing. We’ve got a couple more after that and then we start the Countdown to the Championship. But we’re ready and I’m excited to see what this team can do.”