Top Fuel Countdown preview: Can the No. 1 spot pay off (as usual) for Brittany Force?

Nine times in the last 13 seasons, the top seed in the Countdown to the Championship has gone on to win the Top Fuel world championship. WIll current points leader Brittany Force make it 10 this year, or will Steve Torrence rebound for a fifth straight title?
12 Sep 2022
Phil Burgess, NHRA National Dragster Editor
Feature

For the first time in her career, Brittany Force will enter the NHRA Camping World Drag Racing Series Countdown to the Championship as the top seed in Top Fuel in pursuit of a second world championship. She owns a 20-point edge over second-place Mike Salinas heading into the six-race playoffs, starting at the Pep Boys NHRA Nationals in Reading.

Force won her first championship in 2017 from the sixth spot and slowly nibbled away at top seed Steve Torrence’s lead, beating him in the final in Reading and in the semifinals in Dallas, where he wrecked his car and never could recover, losing in the second round at the season’s final two events, while she scored a runner-up in Las Vegas and a win at the season-ending NHRA Finals.

Force’s run from sixth to first is the largest recovery in Top Fuel Countdown history. In the 13 Countdowns under the current format — 2007 had a different format, and there was no Countdown in 2020 due to the pandemic — the top seed has won the championship nine times. (See chart) 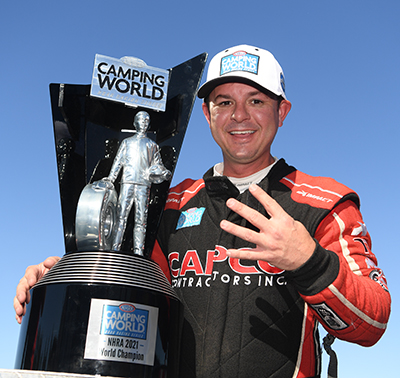 Steve Torrence has won three of his four championships from the No. 1 seed (his third of four was in the non-Countdown 2022 season) and is the only driver to win all six Countdown events, having accomplished that incredible feat in 2018.

Tony Schumacher has twice won the championship from a lower seed — from third in 2009 and fourth in 2014 — and only recent Dodge Power Brokers NHRA U.S. Nationals Top Fuel winner Antron Brown has won from outside the top seed, claiming his second of three championships from the No. 2 spot in 2015 when he overhauled top seed Schumacher.

Observations and predictions from some of this year's Countdown participants:

Brittany Force (first place): “Our biggest objective coming [into the U.S. Nationals] was leaving with the points lead, and we did just that. Everything resets in the Countdown, but we’re in the position we want to be in, and we head to Reading, Pa., next.”

Justin Ashley (third place): “I am excited about the Countdown. Last year was my first experience in a Countdown, and I think that experience will bode well for our team moving forward. We wanted to go into the Countdown in first place like everyone else, but we also really wanted to be in a solid position to make a run at the championship if we weren’t No. 1. Coming into the playoffs in third place is a good spot, but what I learned about the Countdown is the margin for error is so small. Every team out here is running well, and we have to be on our A game week in and week out. It is six races — that is still a marathon not a sprint. We have to do our best on this back part of the year.”

Steve Torrence (fourth place): “These Capco boys have been bad to the bone for five years, and I think we’ll have something for the Countdown. We haven’t had a year where we dominated like in the past, but we didn’t forget how to win. We go into the Countdown coming off a win at Brainerd [Minn., on Aug. 21] and a win in the Pep Boys [NHRA Top Fuel All-Star] Callout, so we’ve got some momentum. We’ll just do what we do and let the chips fall."

Josh Hart (fifth place): “We made the Countdown for the first time, and this is just the beginning. I told all my guys in our team meeting this was only my 30th race in my Top Fuel career. I am super blessed to be doing this, and we want to keep getting better. I am building this team for the long haul.”

Antron Brown (sixth place): “Going from being 11th or 12th three races ago to being No. 6, I think we're going to be in that conversation,” said Brown, whose trip to the winner’s circle on Sunday was his second in three events after winning in Topeka last month. We just want to go out there and compete and go after that championship. That's our game plan right now.”

Leah Pruett (seventh place): “We have plans of potentially testing before the Countdown. We’re going to figure out as much as we can and then hit it from there to solve these little glitches."

Tony Schumacher (10th place): “We're going to six races, and I think we have a better car than we've had all year. I think we found a substantial problem we've had. I look forward to getting to Reading and doing some testing and winning a championship.”