When it comes to adapting to new surroundings, few racers have ever done it better than Tony Stewart so it shouldn’t be much of a surprise that the NASCAR, IndyCar, USAC, IROC, and SRX champ made a strong first impression during his NHRA driving debut at the Nevada Nationals at The Strip at Las Vegas Motor Speedway. Stewart’s Mobil 1 dragster was the first Top Alcohol Dragster to make a qualifying pass on Friday and while Stewart was admittedly nervous, it wasn’t reflected in his performance as he wheeled the McPhillips Racing entry to a very competitive 5.219-second run at 276.52 mph. 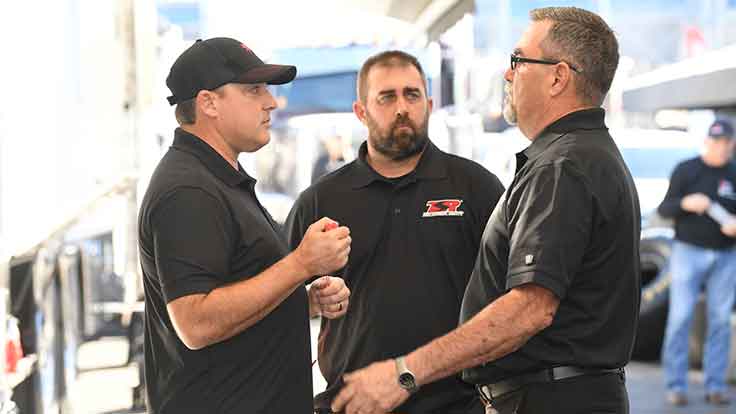 “I was nervous before the first run but it’s a relief now. It’s just like testing all over again,” said Stewart, in his top end interview with NHRA’s Amanda Busick. “There were a lot of distractions before we ran in the staging lanes so to go up there and make a nice solid run, I’m happy with that. I think I might get fired [based on] reaction time [.076].  I still have two nitro cars running today so now I’ll shift gears and go watch Leah [Pruett] and Matt [Hagan] run. But I’m happy. That was a really good lap.”

Stewart remained the top qualifier for most of the session until Kim Parker ran a 5.19 to bump him to the second spot. The fanfare continued through Friday’s second session where Stewart actually raced for the first time with an opponent in the other lane. It was also the first time he’s drag raced at night although the Las Vegas track has some of the best lighting on the tour. The presence of Parker in the other lane didn’t have much of an effect on Stewart who got off the starting line cleanly before the car shook the tires, forcing him to shut off early.

The McPhillips family have trained a number of successful alcohol racers, so they know a thing or two about evaluating talent.

“Tony has got eight runs with us, including four in Brainerd, two in Reading, and now two here, and I can already tell he’s a robot,” said Rich McPhillips Jr. “Early on, we gave him a sheet that detailed out starting and staging procedures and he’s studied it to the letter. You look at him in our pit are and you can see the wheels turning. He’s focused and determined to do well.

“On the first run, we really just wanted to make sure the car went down the track and that [the media] got good video,”said McPhillips. “He ran a bit quicker than we expected, but then again, I’m not surprised considering the level of talent we’re dealing with.”

Last week, Stewart participated in an online media briefing where he was asked about his future in the sport. Stewart acknowledged that he would likely consider running more events next season, although he stopped short of making a commitment towards a full-season or a competing for a championship.

“I don’t know right now. If I love this as much as I think I will, I could definitely see me doing more races in the future. Let’s just see how this weekend goes.”

Stewart and the rest of the Top Alcohol Dragster field are scheduled to make one more qualifying run on Saturday morning with the first two rounds of eliminations scheduled for tomorrow afternoon.