'Today is the start of my future': Second-generation Haddock makes first nitro runs

“Today is the start of my future.”

The words belong to McKailen Haddock, the 16-year-old son of Funny Car veteran Terry Haddock, whose birthday gift from his loving father was two get-acquainted passes in the family’s Vega-bodied Nostalgia Funny Car on The Strip at Las Vegas Motor Speedway on the Monday after the NHRA Nevada Nationals.

Those wistfully forward-looking words, stated in earnest twice in the latest in a series of well-produced videos that he began creating and posting last year to a small but loyal YouTube following, might seem like the fantasy dreams of a teenager, but from the mature-beyond-his-years teen, it’s a definite mission statement, backed by earnest pledges to do whatever it takes, whatever hard work in required, to continue his dream.

NHRA fans know his father, and the struggles that he has faced trying to make it big in the competitive world of Funny Car racing and that school of hard knocks is what is helping shape McKailen into the fighter he knows he’ll have to be to succeed. 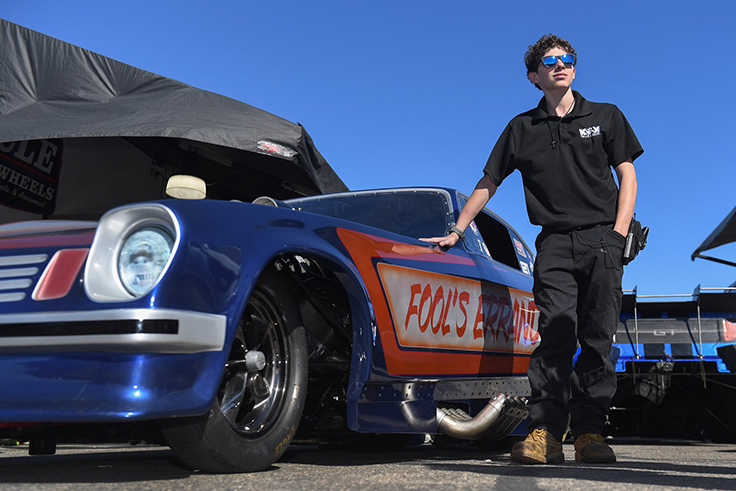 It’s no secret that his dad’s road to success has been long and rocky, and McKailen, as the child of divorced parents who lives primarily with his mother in Washington state and whose father races out of Texas, is doing everything he can to follow his dream and, unlike some of his fellow second-generation nitro racers of better-funded parents, nothing was demanded of him and nothing is being handed to him, and he actually appreciates that.

“Dad's been really good about not pushing me into this,” he said. “Obviously, he would love for me to follow in his footsteps and do what he does — that's kind of every parent's dream — but he didn’t want to push me into it if I didn’t want to. He made it very clear that it was my choice to do. Sure, he would love for me to do it, but he also wouldn't be upset if I didn’t want to do it, which I really appreciate because there are some parents that push their kids into things that they hate doing. It was fully my choice, and it's fully my choice to keep going and keep doing it.

“My dad is the hardest working guy I know, and I am so lucky to have him as my dad because I've gotten to do some of the coolest things. And he's taught me so much about life and being a good person and working hard, and everything you need to be successful in life.”

Although his father has been racing Funny Cars since before McKailen was born, it’s only been the last couple of years that they were able to work out ways to increase his involvement with the team. Because his schooling is still online after COVID-19 — he works in a high school-student program run by Arizona State University — his travel is a little more flexible and his determination a lot more rigid.

“I made a commitment that this year I would be at all the races for the Funny Car team, and I've only missed one, because of a trip I already had planned with mom,” he said. “I've always wanted to get in a car, but I hadn't really taken a full interest in driving or working on the car until last year. Then I started working on the car, and Dad started putting me in the car for warm-ups, and that really started getting me excited.”

Last season, encouraged by YouTubers Brent Leivestad and Jamie Lankford from the PFI Speed channel and Top Fuel racer Clay Millican, McKailen concentrated on creating a videography business and starting his own YouTube channel, buying a trio of cameras and teaching himself how to write, film, produce, and edit the videos to pull back the curtain of life on the road and in the pits.

“Right now, I'm at 764 subscribers, and my big goal is to get to 1,000 by the end of the year, and even though I'm not one of the big YouTubers with 2 million subscribers, it's amazing to think that there are 764 people who are interested enough in me to follow everything I do.

“Right now, I just do it for myself and the team, but in the future, I hope it can lead to sponsorship opportunities, which would be amazing for us, but to be honest, I just really enjoy doing it, being creative [and] stuff, and reading through all the comments. That stuff makes me happy. That's kind of my happy place, where I'm working on something and thinking through something and trying to make the coolest video I can. Ideally, yes, it will bring sponsors, but that's not what it started out as.”

The plan for McKailen to drive began in earnest earlier this year, targeting his birthday weekend, which coincided with the Las Vegas event.

“For the past few months, my dad has kind of been Mr. Miyagi-ing me. putting me in the car for all the warm-ups, towing the car up to the line, just all stuff that helps me learn how the car works and steers,” he said. “Sunday night before we went to dinner, I got all suited up, and we towed up to the line, and my dad walked me through all the procedures to make sure I could see the Tree and everything so that I didn't look like an idiot when we went up on Monday. 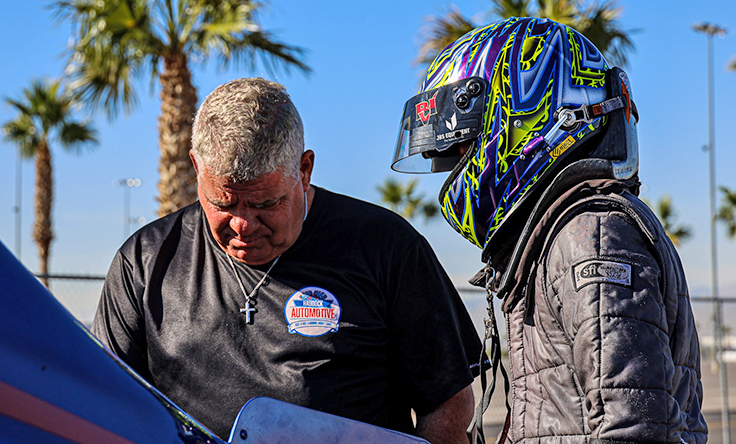 “I was starting to get really nervous Sunday night, actually starting to kind of freak myself out a little bit like, ‘Oh, God, am I actually going to be able to do this?’ I was sitting there talking with Dad on Sunday night, and he said, ‘You know, whatever you do, I'm gonna be super proud of you. I am so proud of you that you're even attempting this,’ and that really calmed a lot of those nerves down. He said, ‘If something doesn't feel right, if you don't feel ready for this, just shut the car down. I don't care what anybody says, I don't care what anybody thinks. You have to be ready to do this.'

“And I asked him, ‘Well, if I shut the car down, and I'm not ready to do this, is this gonna embarrass you?’ and he's like, ‘Son, whatever you do, it's never gonna embarrass me. If you feel like you're not ready for it, it means that I've taught you well and that you're doing the right thing for you, and not getting anybody hurt.’ And that conversation really stopped all of those worries, because I knew no matter what, Dad's going to still love me, even if I decide to shut it down before the burnout. He's still going to love me. I'm still his son. So, all of that stuff really stopped all of those worries. 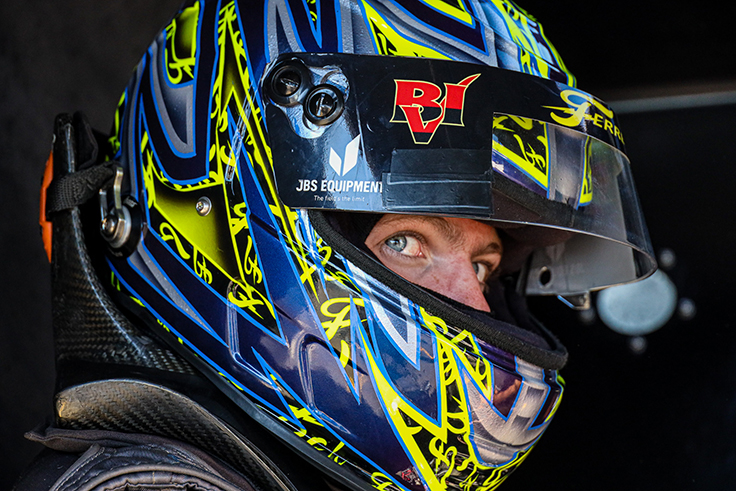 “When I went to bed that night, it was like being a kid on Christmas Eve. You're laying there like, ‘Oh, God, I can't wait for tomorrow. If I go to sleep, then it'll be here quicker,’ but then you have trouble falling asleep because you want to fall asleep. I had my alarm set for 6:30, I jumped up, and I took a golf cart and walked the track and just took a few minutes to myself to get ready and kind of be like, ‘OK, I can do this.’

“We towed up at probably 10 and made the first pass. I only went to 60 feet, just to make sure I had a handle on the car and that I was confident for next time, but it was really cool. There's no real way to describe it.

“When it roars to life, you're like, ‘Whoa,’ because it's such a different feeling than being up on the jacks to be on the ground, and then they shut the body and Dad always says, ‘That's the most peaceful place you'll find on the planet.’ And I was like, ‘OK, whatever, Dad,’ and he was right. Everything kind of clicked at that moment, and I was good to go. I was a little bit slow on the backing up [from the burnout] because Dad didn't want me to run over anybody, and that's probably why we think it smoked the tires because I heated the clutch too much, but it was still insanely cool.

“Everybody was super happy with me because I caught it right away and just idled down the track. And then we went back and put a couple of fans on the clutch and then towed it up there again. There's some amount of nerves that you're gonna have going into the first time because you just don't know what to expect, and the second time I was a lot better. 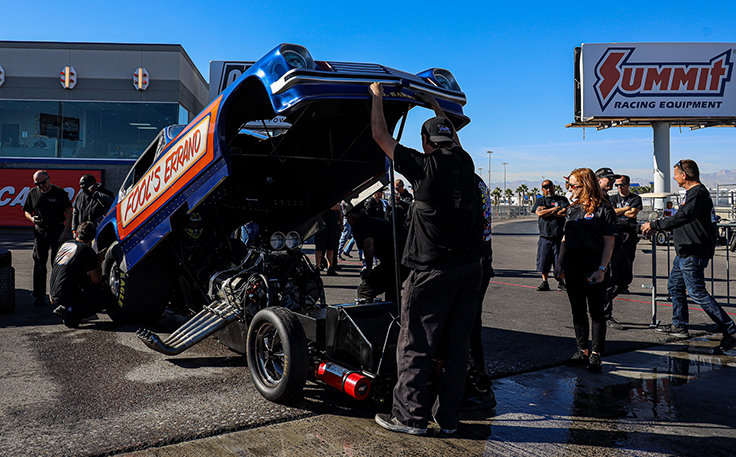 “One of our guys., Austin, who's like a big brother to me, while he was standing there holding the body, he kind of smiled at me. He sent me a text later saying, ‘I know you saw me smiling at you while I holding the body. That's the moment that I knew I could trust you. I could trust this kid with my life. You were the most calm and collected person that we've had in the car while I've been here.’

“I was just so much more comfortable that time I kept my foot on the gas all the way [until it shut off], and I can't wait to do it again. Justin [Ashley] came by after my run and talked to us for a few minutes, and he was like, 'If I hadn't known that that was you in the car, I would have thought it was your dad backing up from the burnout, everything just looked just like your dad, and you're gonna go far,’ which I thought was really cool.” 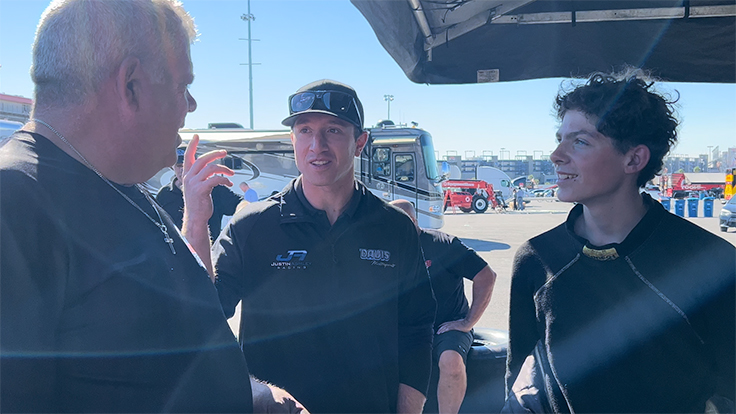 “In a few weeks after Pomona, we're going to try and take it out again as long as I can find some money to pay for it,” he said. “I'm making a list of everything that we're going to need to be able to run this car next year in the [NHRA] Heritage [Racing] Series. And then I'm going to kind of put together a proposal and start trying to find sponsors so that we can actually run the car and run competitively. 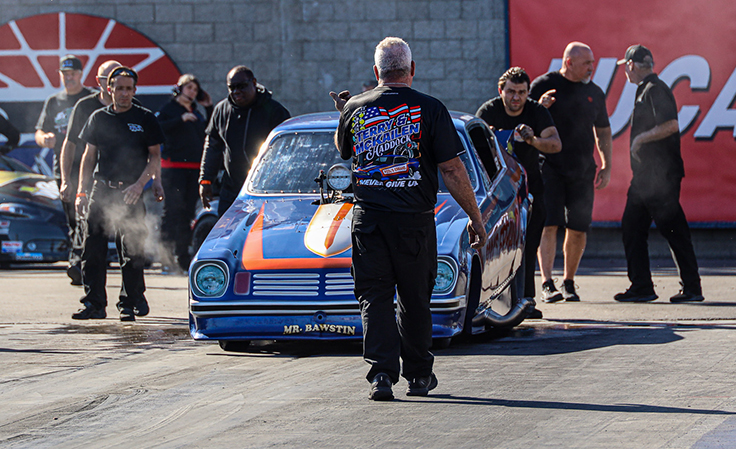 “At the end of all my videos, I always say, ‘Never give up,’ and that started after Sonoma when we had that big explosion with the two cars, and it was kind of a tribute to Dad. But ever since I was growing up, Dad would always tell me ‘Never give up,’ when he came up to Seattle to visit me. Watching everything that Dad does has been kind of a driving force in everything I do because I want to be successful in racing. Dad always says, ‘Maybe if I can't get to the degree of success that I want in racing, maybe we can make it happen for McKailen.’ Well, I'd like to make it happen for both of us. I'm so glad that I've got the opportunity to work hard and do all of this because, eventually, somebody's going to come along and give us an opportunity.

“Someday our goal is to be up there on [John] Force’s level, on Tony Stewart's level. I want to be coming for them. I'm not sure how I'm going to make it happen, but I'm gonna figure something out. And we're gonna get there.” 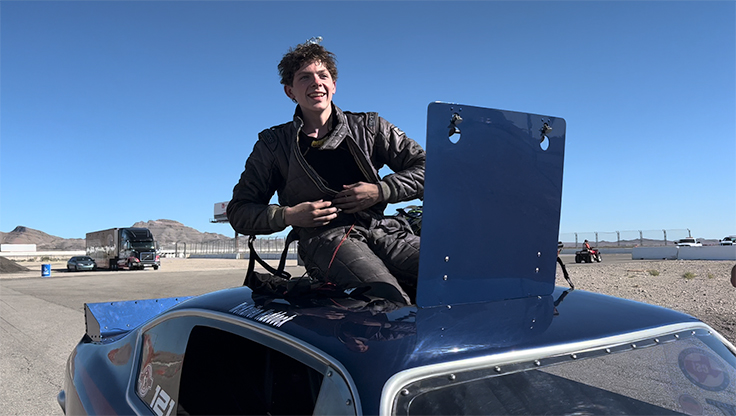