Tim Wilkerson is still kicking himself after his red-light in the final round of last weekend’s Pep Boys NHRA Nationals, but he’s glad that he only had to wait five days to get back behind the wheel at the Betway NHRA Carolina Nationals.
23 Sep 2022
Phil Burgess, NHRA National Dragster Editor
Feature

Tim Wilkerson is still kicking himself after his red-light in the final round of last weekend’s Pep Boys NHRA Nationals, but he’s glad that he only had to wait five days to get back behind the wheel of his Levi, Ray & Shoup Funny Car at the Betway NHRA Carolina Nationals.

Wilkerson’s Ford inexplicably broke two connecting rods in a semifinal victory over John Force, setting ablaze the fluorescent green and black body, and it took a heroic effort by his Richard Hartman-led crew — with assists from at least four other teams — to get the car ready for the final-round battle with points leader Robert Hight.

Wilkerson’s blatant -.220 red-light in the final against Hight was the indirect result of the fire, but that didn’t stop him from being bitterly disappointed about it. 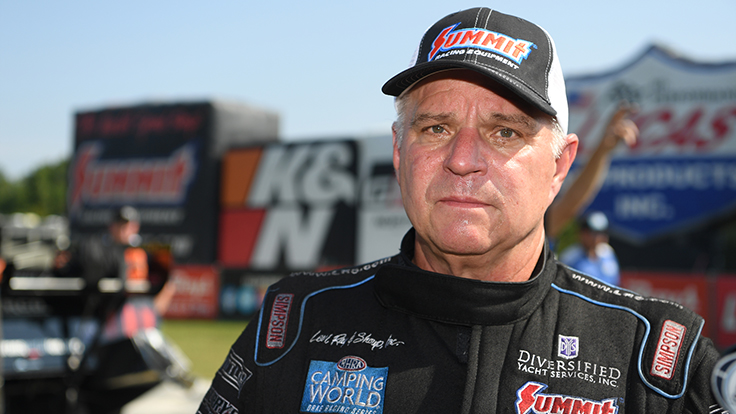 “I felt worse about letting everyone down than about actually losing,” he said.” I don't know how I got so lucky to have all the people that were helping me, and I don't know that we would have made it without them, and then for it to be all for naught.”

“I had a smoked visor on all day because that place is really bad when the sun hits — it gets all glary in there — but I didn’t have time to switch it out, so I just grabbed my other helmet, which had a clear visor on it. I couldn’t see very good, and I stared as hard as I could stare and just [messed] up. I thought I saw the lights blink.”

Wilkerson shut off early to a 6.00 and watched Hight streak to his seventh win of the season with a 3.93, well within the reach of Wilkerson, who had run 3.91 and 3.92 in the opening rounds.

“I don't know if we had won or not, but after running that 3.91 in the second round, I told Richard, ‘She was so safe. We'll be fine, bro.' Then it broke the two rods, and I'm still questioning why.”

The body from that run is “junk,” according to Wilkerson, as the fire really roared to life after Wilkerson clambered from the car and lifted the body to try to minimize the damage.

The team fetched its other spare body — cobbled together after three different mishaps — from their Illinois shop to serve as their spare this weekend as Wilkerson continues his hopeful charge to a first season championship.

The Countdown to the Championship points reset gave Wilkerson a big boost, going from 840 points behind Hight to just 90, and even though he gave up more ground to the points leader Hight in Reading, he gave up less than everyone else. He went from ninth to sixth and now sits 122 points behind the leader, but another strong outing this weekend and a misstep by Hight could tilt that.

“If we do that [reach the final] every weekend — less the blow-up part — I think we still have a good chance," he said. "I’ve got a good car. We'll see how it goes. I don't know that I can run [3.]85 with them on those throw-down runs — we did it in Phoenix earlier this year — but It'll be hot here on Sunday, and it'll slow them down to bring me back a little bit.”