The 2022 NHRA Camping World Drag Racing Series Countdown to the Championship begins the second half of its six-race playoffs with the annual Texas NHRA FallNationals at fabled Texas Motorplex, one of just eight venues on the tour with a history that dates back into the 1980s, long before the Countdown ever existed.

All four world championships are still well up for grabs with only four-time Pro Stock champ Erica Enders, the home-state favorite, holding anything approaching a comfortable lead with an edge of 120 points over her second-place teammate Aaron Stanfield.

Enders hasn’t won at this track since 2015 but rolls in with a ton of momentum after her second Countdown win and a 2022 playoffs record of 10 for her Elite Performance/Melling Camaro. The only one of the three that she didn’t win went to Stanfield in Charlotte, but his roll was stopped in round two in St. Louis.

Reigning world champ Greg Anderson could use the friendly confines of Texas Motorplex to stage a comeback as the veteran 100-time winner has been to the final round here the last three years with wins in 2021 and 2019 and a runner-up in 2020. 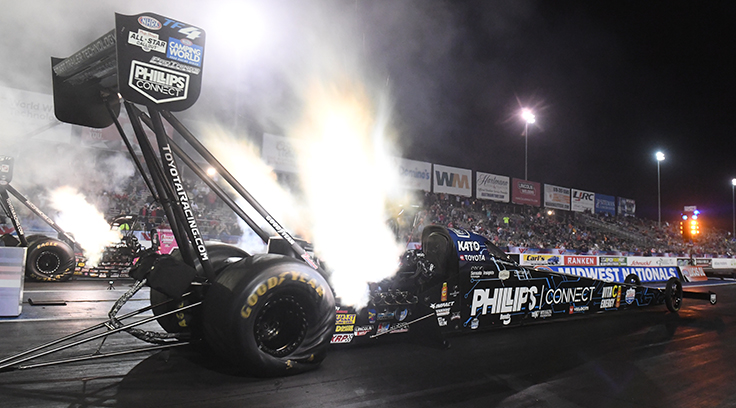 The tightest battle is in Top Fuel, where Justin Ashley, the defending event champ, leads Texas hero Steve Torrence by less than a round (14 points). Ashley has collected a pair of runner-ups in the three Countdown events this season but will get some strong pushback from Torrence, who was runner-up to him here last year and also won this event in 2018 and 2020, both times en route to the season championship.

After two wins in three Countdown races, you’d think that Robert Hight would have a bigger lead than just the 46 markers by which he leads reigning champ Ron Capps, but Capps has been hanging tough, winning the one race that Hight did not — Charlotte — and scoring a runner-up behind Hight in St. Louis.

Matt Hagan, John Force, and Bob Tasca III all need good outings this weekend to bring them back from a triple-digit deficit and back into the title battle. After winning this race in 2019, Hagan has gotten close the last two years with a pair of runner-ups while Force has not won here since 2005 and Tasca since 2012.

After surrendering his top seed to Joey Gladstone at the first Countdown event, Matt Smith raced back into the points lead with his victory in St. Louis, which included a crucial semifinal victory over Gladstone.

Smith’s lead over Goldstone is just 21 points, and their next closest contender is Smith’s wife, Angie, the Countdown’s biggest mover so far, having jumped four positions to third place thanks to a runner-up in Reading.

Fourth through seventh place are separated by just three points between Eddie Krawiec, Steve Johnson, and Jerry Savoie, with former three-time world champ Angelle Sampey right on their heels. Early stumbles by Smith or Gladstone and a big day from any of those four could really shake up the points battle.